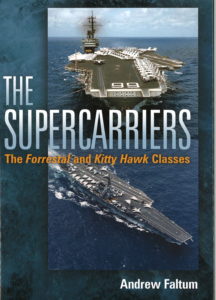 The book offers a workmanlike introduction to these vessels, offering an overview of their development, and the operational histories of the classes discussed and the individual ships.

Faltum does a first-rate job describing the environment in which these vessels were created in. In many ways, the first four chapters, presenting design and development of these carriers, are the most interesting in the book. Faltum shows how the resulting design was a compromise between the goals they were to achieve and the limitations under which they operated.

Those expecting a detailed, nuts-and-bolts breakdown of the individual classes will be disappointed. Faltum keeps things at a high level. There are overhead and side views of Saratoga and Constellation on the endpapers, and three smaller drawings showing internal arrangements of the ships in one of the appendices. The book contains 85 pages of appendices. These too, are high level collections of data. The bulk of the appendices are a list of the composition of the air group of each carrier while in commission.

The Supercarriers also spend significant space describing the various aircraft, missiles, and weapons systems deployed on these ships. These comprise carriers’ weapons, much like battleship guns; make up its striking power. As such they form an important context for the operation history of a carrier. These tend to independent of the carrier, however. Someone interested in the ships rather than the carrier system may be disappointed. Of greater interest to naval architecture buffs are Faltum’s discussions of systems such as catapults and radar.

The result is a book that feels like a supersized Osprey New Vanguard, one with twice the pictures, six times as many pages, and no color plates. The greater size offers more scope for an expansive discussion on operational history, which those interested in history will appreciate.

The Supercarriers is great for those looking for a comprehensive introduction to this subject. Wargamers may find the technical specifications and air group listing useful. Model-makers or those interested in technical detail may not find much, but The Supercarriers should interest those whose primary focus is history.