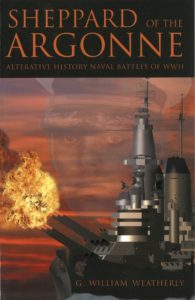 What if the Washington Naval Conference collapsed and its terms were never ratified? What if the post-World War naval buildup continued unabated until the Second World War?

Sheppard of the Argonne is set in an alternate history where those questions become an engrossing narrative.

In Sheppard of the Argonne, the assassination of the head of the Japanese delegation to the Washington Naval Conference, Baron Tomsaburo Kato, causes the collapse of the disarmament talks and the continuation of post-World War naval building programs by all nations. Along with this change to the timeline, certain technologies have been accelerated while others remain essentially true to reality. This creates a world where the big guns and heavy armor of the battleships and battlecruisers still rule the day and the aircraft carriers stand to support them on the high seas.

History and fiction are blended throughout the novel in creative ways. The major characters on all sides are works of fiction. This allows for creative freedom, and the reader is well rewarded for it. For example, the novel’s main character, Captain Sheppard McCloud, hero of Pearl Harbor, is a conflicted and damaged man. He fought his ship, the battlecruiser Shenandoah, courageously against the Japanese attack force but suffered mentally and physically in the process. His demons from that battle play a prominent role as we follow him into battle on the North Atlantic in command of the battlecruiser Argonne. Mounting the latest technology, including 18” guns and a Combat Information Center, Argonne is one of the most advanced ships in the US Navy’s arsenal. While McCloud doubts his own abilities, his commanders do not. They hope putting him back to sea after a prolonged recovery on shore will bring him back to fighting trim.

William Weatherly is the pen name of George Jackson, whose experience as a retired naval officer shines through as we watch McCloud handle the stresses of command while struggling with the responsibility he has to his crew, their families, his country, and himself. He is pushed to the breaking point by what others call his heroics and McCloud judges as his failures. During the aftermath of the attack on Pearl Harbor, we discover a man who wants to do his best but sometimes fails to believe he possesses what is required to do so. This inner conflict drives a powerful narrative of what command at sea is like in wartime.

The narrative is written in an accessible and technical prose that will engage the naval enthusiast without putting off the average reader. George Jackson does not seek to tell the entire story of his different Second World War. He inserts just enough detail of outside events to make it clear that the war is quite different from what we know and spur the reader’s interest while not detracting from the central story of Captain McCloud and his date with a German fleet in the North Atlantic.

Sheppard of the Argonne is an exciting sea tale adventure that leaves the reader wanting to learn more about this different Second World War. It is a fine first entry into the literary world for a distinguished naval officer.

Jason McHale is an adjunct history professor at Quincy College, Edmonds Community College and Southern New Hampshire University. He specializes in the Pacific Theater of the Second World War.