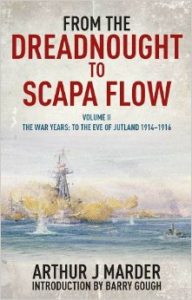 Of the first of five volumes that compose Dreadnought to Scapa Flow, this review addresses Volume II, subtitled “The War Years: To the Eve of Jutland 1914-1916.” These five books, which address World War I from the Royal Navy perspective, were first published in the 1960s.

In Volume I, we learned about the five reforms that Jackie Fisher, the First Lord of the Admiralty, brought to the navy leading up to the war. The Selborne Scheme focused on personnel and training – the broadening of the officers’ training and improving living conditions for the tars. HMS Dreadnought introduced a new standard for the ship-of-the-line, the battleship emphasizing a robust main battery. The final three reforms: Nucleus Crew Concept, Scrapping of Obsolete Men-of-War, and Redistribution of the Fleet were interrelated and reflected a major shift in strategy. The Royal Navy’s 19th century mission of extending and then preserving their empire was scrapped. Its focus became containing the German Navy and being ready to win the climatic, Mahanian-style fleet action. So how did the Royal Navy perform after these and other reforms?

Dr. Barry Gough offers his answer in the first paragraph of his introduction:

“From the vaunted expectations of how such a well-trained, well-commanded naval force with its powerful traditions and pride, dating from the age of Nelson and before, would acquit itself, only disappointment ensued.”

In Volume II, author Arthur Marder provides a host of examples to confirm disappointment as an appropriate description of the first two years of the Great War at sea. The first test was finding and sinking the German battle cruiser Goeben in the Mediterranean. Despite the Royal Navy domination of the Med, Goeben escaped to Istanbul and “joined” the Turkish Navy. (See Captain John Rodgaard’s recent review)

The following month, three obsolete light cruisers of the “live-bait squadron” (yes, as they were known in the Channel Fleet) were sunk by the U 9 within an hour. The Battle of Coronel re-confirmed that not all obsolete ships had been purged from the British fleet the following month, when a superior German force sank the cruisers Good Hope and Monmouth with all hands. Revenge came off the Falklands when the same German squadron (led by SMS Scharnhorst and SMS Gneisenau) was soundly defeated by British battle cruisers.

The modest but successful German raid on the coastal towns of Scarborough, Whitby, and Hartlepool shook the English public. The Battle of Dogger Bank provided more examples of mistakes and communications failures.

But the most colossal failure, Churchill’s attempt to create a second front during the Dardanelles campaign, left a host of ships on the bottom of the straits and an army ashore in a stalemate. Heads rolled in the admiralty and a new team was put in place by the end of the first nine months of conflict. At this juncture in the book, the reader might be tempted to double check the winner of World War I in Wikipedia.

Marder knows the Great War at sea. Many of the naval leaders were still living when he started researching and writing this five volume set. His interviews and correspondence with the key players ensures first person accuracy and an airing of the squabbles as some enduring disagreements survived decades after the war.

Marder’s view of the importance of leadership is underscored in the first chapter that delves into the British and German personalities. During the late Victorian period a service reputation was built on shiphandling, ship smartness, and drill performance. When war came some admirals made the transition to fighting officers, many did not. This malaise was described by Marder, as rooted in a “peacetime routine of ‘Follow senior officers’ motions’ [sic] and when in doubt ‘Request instructions.’”

“The three aces…are the attributes of Nelson, ‘the perfect Admiral: 1. A gift for leadership, for drawing loyal, wholehearted service from officers and men. This was the most important ace. It transcended everything else. The finest leadership include the other aces. 2. Fertile imagination and a creative brain, as in the ability to plan battles.3. Eagerness to make full use of the brains and ideas of juniors and to take them into one’s confidence. The third attribute was particularly rare in the Navy of 1914-1918…There was a fourth Nelsonian attribute that was particularly important in war: offensive spirit.” (fn. 2 pg. 8)

Another element of naval leadership described by Marder is civilian oversight. Churchill, who initially did so much to prepare the RN for the pending war, eventually interfered and overstepped, which resulted in his dismissal for the Dardanelles fiasco. Former Prime Minister Arthur Balfour (1902-1905) was selected to replace Churchill and bring “patience, cheerfulness, and imperturbable calm…” Marder catalogues a list of super-human qualities, but then balances these virtues with “Serenity and union were restored to the Admiralty – but at a high price. Balfour was, let us face it, a lethargic man. His energy was desultory; he lacked sustaining power.” Lloyd George (P.M. 1916-1922) described Balfour as a ‘dawdler.’

Volume II becomes comparatively uneventful after the Dardanelles. “Watchful waiting” became the byword of the day. Germany’s High Seas Fleet cautious, waiting for the right moment to challenge the British Grand Fleet on the North Sea. The British warships lurked in Scapa Flow and the Firth of Forth waiting for the opportunity to pounce. In the last chapter Marder surveys the two fleets and their leadership on the eve of the only Mahanian fleet action of the war.

Eight excellent maps accompany this volume. As 2015 is the centennial of the first full year of the Great War, readers will find one anniversary date after another, as 1915 progresses. Although 447 pages take some dedication to complete, Marder’s prose about English seapower reward the reader’s engagement.

Winn Price has completed the first in a series of maritime novels. The writing of the second novel has just begun and is primarily set in the South Pacific, The Kingdom of Hawaii, and the Chicago World’s Fair of 1893.