There was no grand event to set off the conflict like Pearl Harbor. There was only blood, oil, and sunken metal. The fate of the world did not rest in the hands of intrepid commanders with stars on their uniform. For a time, that responsibility was given to a select few brave individuals commanding warships to seek and destroy the Nazi threat. 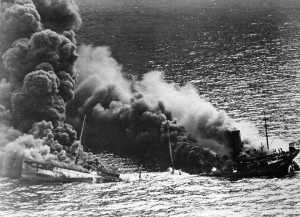 America was no longer isolated. Following the attack at Pearl Harbor in Hawaii, the possibility of avoiding conflict against the Axis Powers grew thin. Now with their adversaries clearly defined by their own Congressional and Presidential decree, Nazi Germany saw the opportunity to strike – fast and hard. Like bloodthirsty wolves, a pack of U-boats brought the war to American waters. For citizens of the United States, especially those in cities along its coastline, it was a time of fear. For the German Navy, it was their “happy time.” This period during the second Battle of the Atlantic is more commonly known as Operation Drumbeat. Others call it like it was: the American Shooting Season.

Between January and August 1942, Nazi submarines caught the United States off guard in the Atlantic Ocean and Gulf of Mexico, sinking hundreds of ships carrying vital materiel to the Allied war effort. For their efforts, Nazi Germany only lost twenty-two U-boats. Of these, the vast majority was sunk in the Atlantic Ocean. Only one met its end in the Gulf of Mexico, the Type IXC submarine U-166.

The ship entered the Gulf of Mexico in July 1942 to lay mines along the Mississippi Delta, sinking several vessels along the way from its transit from Trinidad. The final ship sunk by U-166 was the SS Robert E. Lee, a steam passenger ship. Unfortunately, for the U-boat, the vessel was not alone. Nearby on escort was the U.S. Navy patrol craft PC-566, commanded by then Lieutenant Hebert G. Claudius. He and the crew of PC-566 dropped a series of depth charges that they felt were sufficient enough to kill the German vessel. To him, a small field of floating debris and oil slick was enough evidence to confirm their victory. The U.S. Navy did not see it that way, and credited the actual kill of U-166 to a Coast Guard patrol craft two days later. The Navy subsequently gave Claudius an “F” rating for his action and relieved him of command.

He retired as a Navy Commander and died in 1981 without ever knowing the truth about his war action.

U-166 now lies 1,450 meters below the Gulf, discovered by archaeologists of C&C Technologies in 2001 in the same spot claimed by Claudius. Was it enough to clear his name and give him and his crew the credit they deserved? The evidence was clearly there in the Gulf of Mexico. All that was needed were the right group of individuals to help uncover the truth.

These exploits in the Gulf of Mexico were the focus of Tuesday evening’s event at the U.S. Navy Memorial’s Naval Heritage Center. Guests at the event were given a special sneak peak screening of NOVA/National Geographic’s newest documentary, “Nazi Attack on America,” which featured Ocean Exploration Trust president and founder Dr. Bob Ballard, himself a former Commander in the Navy Reserve. The documentary debuted last night. Along with the screening of the documentary, Dr. Ballard and several of his staff gave a broad explanation of their current 2015 season of exploration aboard E/V Nautilus and its ongoing projects with STEM education and telepresence technology. 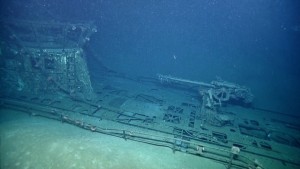 Two Commanders separated in time and place but aligned in their pursuit to discover the truth. It was a night to celebrate the achievements of individuals working together as a cohesive unit, separated by more than seventy years, Dr. Bob Ballard and his team of brilliant scientists at the Ocean Exploration Trust helped undo an error made by the United States Navy in 1942.

Hebert G. Claudius used every man aboard PC-566 to sink the German U-Boat. The weaponry he used were depth charges, a crude yet effective piece of anti-submarine warfare. Dr. Ballard did not use weapons of war to uncover the truth behind the sinking of U-166. His crewmembers, which he calls the “Corps of Exploration,” are an elite group of scientists, engineers, communicators, educators, and students. “I’m going to use my technology to take on a detective story,” Ballard said in the documentary. For Ballard, who admitted once that he wanted to be Captain Nemo as a boy, he is truly living out his wildest dreams.

With Ballard in command of the expedition, the documentary goes into the process by which E/V Nautilus found several of the U-boat’s victims, only to discover the wreck of their aggressor only miles away from the wreckage of its last “kill,” the SS Robert E. Lee.

Would Ballard and Nautilus help Commander Claudius clear his name? Admittedly, the production team (and E/V Nautilus) was unaware of what they would find once they got out there. “We were just hoping that something would come of the expedition,” said NOVA Sr. Executive Produce Paula Apsell in a Q&A session after the film screening. “We were fortunate with what Bob and his team found.”

Clara Smart, a Ph.D. candidate at the University of Rhode Island who was in attendance at the 5 May event, mapped the entire wreckage of U-166 with high-resolution images taken by their Remote Operated Vehicle (ROV) Hercules. Once they reached the wreck site, Ballard’s team noticed something odd about how she sat on the sea floor. The bow was completely blown apart from the ship 140 meters away. The exploration members were sure this could not have occurred from damage caused by a depth charge, whose offensive purpose is to fracture the hulls of submarines.

With the expert use of the composite images collected from their ROVs and the help from a military historian, Ballard and OET were able to deduce that Claudius and PC-566 did in fact sink U-166 using depth charges. Given the explosion blast and the nature of conventional depth charges, it was discovered that a well-placed barrel fell onto the deck of the ship, which proceeded to drag it down to the necessary depth before exploding just below the explosive torpedoes. 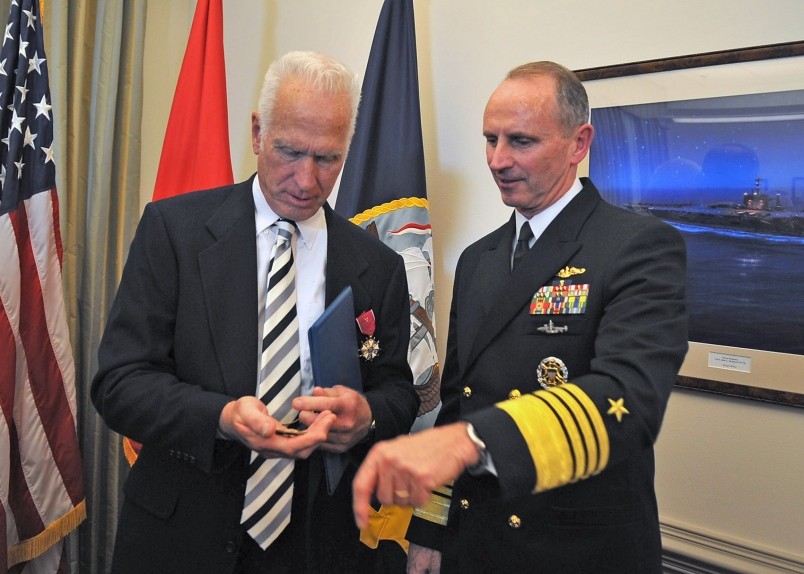 A ceremony was held at the Pentagon on 18 December 2014 with Hebert G. Claudius, Jr., the son of Commander Claudius and Chief of Naval Operations Admiral Jonathan Greenert, USN and Secretary of the Navy Ray Mabus. The low-key event recognized the success and official credit of the kill to Claudius and PC-566. For his efforts, his son accepted the Legion of Merit with a Combat “V” for Valor. Dr. Ballard was in attendance at the ceremony. He jokingly mused in the Q&A session afterwards that he was once “the superior officer to Admiral Greenert aboard NR-1 […] although I think he ended up doing a little bit better.”

For a man who has discovered everything from the Titanic to the origins of life in deep-sea vents, he is incredibly humble about his role in shaping the way we see naval history today. Science and technology contributions to the field of naval history are endless, like the ocean they explore. Dr. Ballard is living proof of this. If the earth is 70% water, the Navy has responsibility to protect it, and Ballard and the Nautilus to preserve and study it.

For more information about the NOVA documentary, please go here. Dr. Ballard’s team aboard E/V Nautilus is available to view 24/7 at www.nautiluslive.org. Please stay tuned for some exciting collaborations the Naval Historical Foundation is currently undergoing with the Ocean Exploration Trust.