Amidst the flurry of activity at the Sea-Air-Space exposition down the road in National Harbor, MD, the Naval Historical Foundation and Naval Submarine League held it’s annual Submarine History Symposium at the U.S. Navy Museum’s Cold War Gallery last Wednesday. The symposium’s topic and speakers were well received by an enthusiastic and attentive crowd. Over one hundred individuals were in attendance to socialize, reconnect, and learn from first-hand experts on the last half-century of US-UK submarine cooperation. 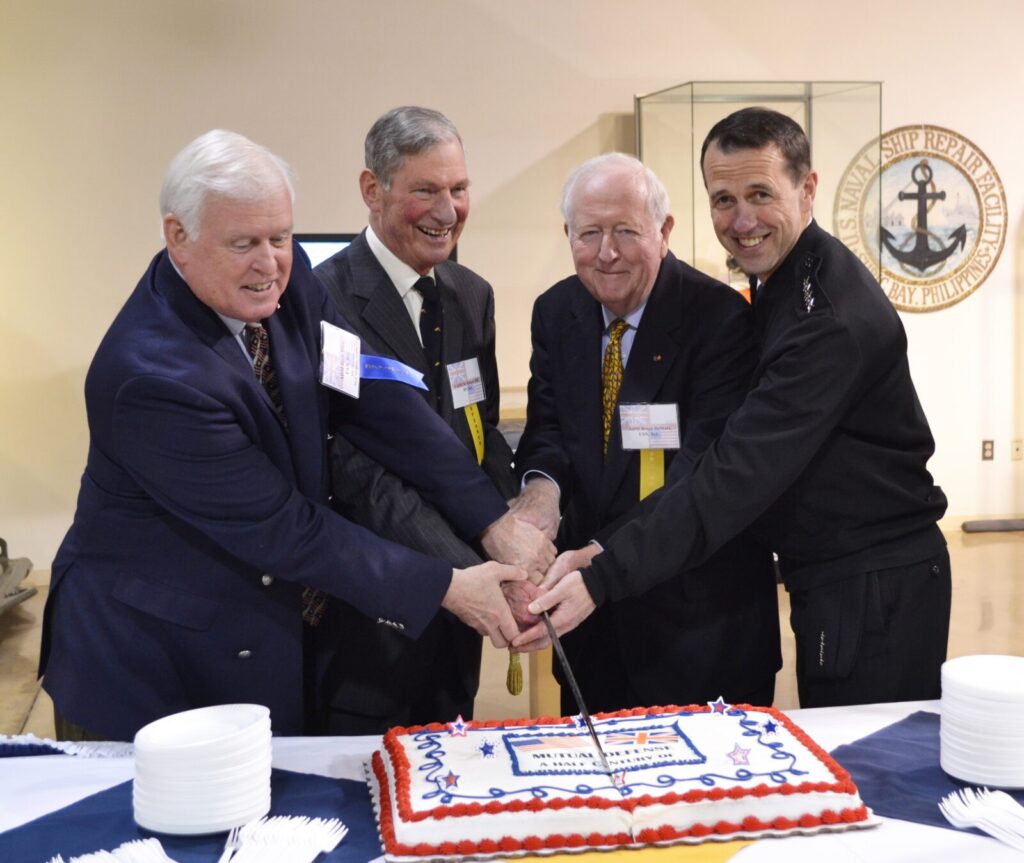 Seminar chair and moderator Dr. David Rosenberg built on the success of last year’s Sub History Seminar on torpedoes. Focus this year centered on missile technology and nuclear propulsion plant development between the United States and United Kingdom, namely POLARIS and TRIDENT and the one man unquestionably connected to the Nuclear Navy in both countries, Admiral Hyman G. Rickover. Many of the speakers at the Submarine History Seminar this year had first-hand experience coordinating US and UK submarine development from the U.S. Navy and Royal Navy’s nuclear reactor and missile programs. Attendees had the rare treat to hear behind-the-scenes insight of the modern nuclear submarine by some of the most influential leaders in the field.

Our distinguished guests from England were the evening’s first speakers.

Jock Gardner – From British U-Boat to Boomer in 21 Years 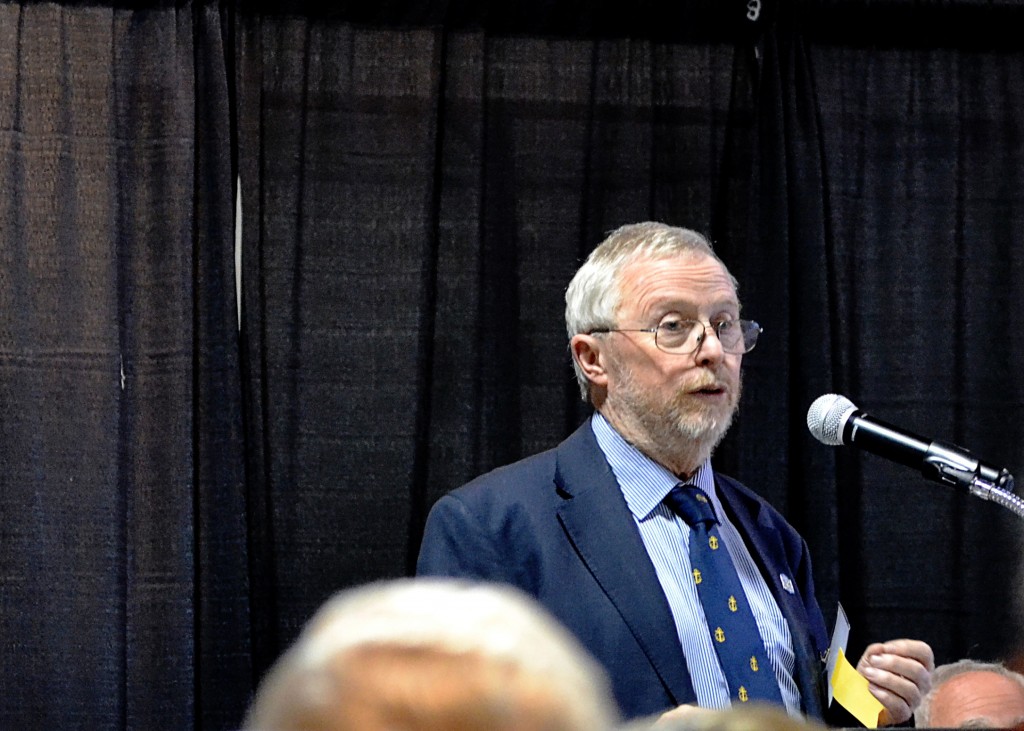 UK Ministry of Defence historian Jock Gardner gave an introduction to US-UK submarine relations in the years after the end of the Second World War. Gardner discussed the “trial and error” period that the Royal Navy went through in order to make their submersibles go “from faster boat to true submarine.”

That period did not always go smoothly for the British. According to Gardner, the Royal Navy intended to improve propulsion and hull form by initially following and studying the example of the German Type XXI submarines.   There were pitfalls along the way, including the development of the hydrogen peroxide submarines Explorer and Excalibur, which Gardner affectionately called the “Exploder” and “Excruciator.” Due to cost and reliability, that program was quickly cancelled. What got the UK back on track was their nuclear force, composed of the UK nuclear propulsion program and strategic weapons initiative both moving towards an “assumption of deterrent.” That assumption was pushed through with the help of the United States. Working with Admiral Arleigh Burke, Lord Mountbatten and his successors eventually settled on a US-UK POLARIS agreement despite the grumblings and misgivings of several upper-echelon staff within the Royal Navy. HMS Dreadnought, the UK’s first nuclear submarine, became a symbol of technological innovation and sea power, just as the battleship Dreadnought had in the early twentieth century. 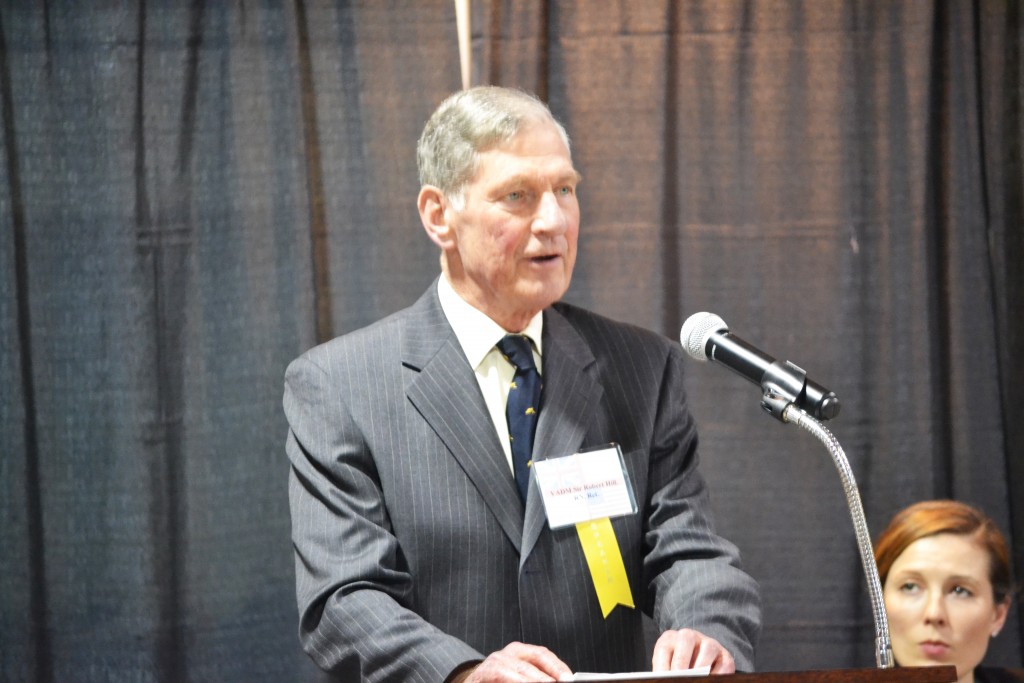 When anyone mentions the U.S. Navy and nuclear propulsion, one name always comes to mind – Admiral Hyman G. Rickover. Indeed, Rickover helped revolutionize the industry as the first head of Naval Reactors. As polarizing a figure as Rickover was, however, he did not do it all alone. Rickover received the advice and expertise of the British. The relationship between Rickover and the British, for better or worse at times, was “extremely personal,” according to Vice Admiral Sir Robert Hill.

Vice Admiral Hill captivated the audience with the personal and professional stories of the UK Naval Nuclear Programme, from the construction of the Calder Hall and Shippingport power stations in the early 1950s to the launching of HMS Dreadnought a decade later.

Sir Robert Hill’s best stories came from the anecdotes he included about Rickover and his tenuous relationship with British naval leaders and scientists at Atomic Energy locations in England. That initial temper exponentially cooled once he met with Admiral Lord Louis Mountbatten, the Royal Navy’s First Sea Lord from 1955 to 1959. In the words of a 1981 article in Proceedings, “the introvert iconoclast from the Ukraine [. . .] fell under the spell and aura of Queen Victoria’s grandson.” Still, Rickover’s characteristic demeanor tested the patience of the British. Professor Jack Edwards, who would later establish the Royal Navy’s nuclear propulsion courses at the Royal Naval College, explained further:

“We had several occasions when Rickover tested our stamina and nuclear knowledge and explored our national resources and abilities, but these were just demonstrations of his raw and innate determination to expose any weaknesses.”

The personal friendship between Rickover and Mountbatten undoubtedly helped push the nuclear propulsion program forward. After a while, the UK had enough steam to take full control of operations, as Hill so eloquently demonstrated as his thesis throughout his lecture. “All this was done without further help from the USA,” Hill said, “justifying Rickover’s believe that given a kick start, the UK would be well able to stand on its own feet.”

Vice Admiral Hill’s counterpart in the United States, Admiral Bruce DeMars, USN (Ret.), offered up his perspective on the US-UK relationship to submarine development. DeMars flipped focus to talk about the role that Naval Reactors here in the United States played in the development and cooperation of nuclear energy for civilian and military use.

NHF Chairman DeMars began by discussing the Atomic Energy Commission’s decision in 1954 to ask Rickover and his staff to build the world’s first civilian nuclear power station. Such a system would deliver clean electricity to the nation’s electric system. The task laid in front of Rickover was not small or simple. As DeMars noted, Rickover was admittedly nervous to take on such an ambitious assignment.

Such a herculean tasked would require cooperation with the British. Rickover planned to assemble a team of eight to meet with UK representatives over the course of the 1954 Christmas holiday at Harwell nuclear lab to discuss a plan of action and cooperation. The rest of Admiral DeMars’ talk highlighted the eleven days that Rickover’s team of experts and specialists spent at Harwell. Long full day sessions and grueling interviews between Naval Reactor and Westinghouse specialists with Harwell experts shortened Rickover’s visit by several days. He subsequently returned several times between 1955 and 1957.

These visits and talks, added by the launching of Sputnik in 1957 and Eisenhower’s NATO speech that year, sparked the need to make amendments to the Atomic Energy Act. By 1959, Rickover had met with the Chairman of the Atomic Energy Commission and the British Atomic Energy Authority about exchanging reactor information in order to conserve the scientific and engineering talent of the two countries:

“You have to remember that Rickover started dealing with the UK in a really unauthorized way in 1953. You finally get congressional approval in 1958, so he had operated on his own for about five years [. . .] moving things ahead.”

This type of cooperation, aided by Rickover’s respect for Lord Mountbatten as First Sea Lord, propelled both countries to become as leaders in nuclear energy and submarine technology with the use of the Westinghouse S5W reactor plant, used on USN submarines until the mid-1970s (A S5W reactor plant was used on HMS Dreadnought). The US would eventually cut the chord and leave the UK to run things independent. To ask the question of the evening, “Could the UK have done it alone,” DeMars’ answer is direct. “I think so,” he said as he closed his talk. “It would have taken longer and cost more money, but we both learned some things in the process.” 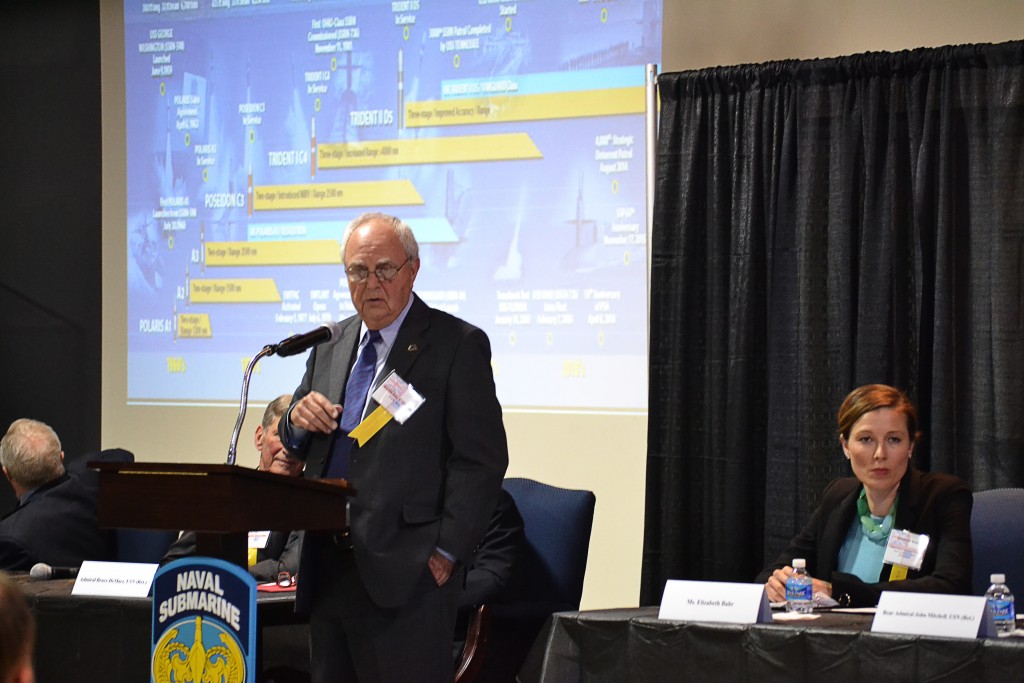 The seminar closed with a point/counterpoint talk on the role that the Navy’s Strategic Systems Programs (SSP) played in US-UK submarine cooperation. Moderator Dave Rosenberg admitted having the “interesting combination” of two speakers together, one from a background in military weapons and the other from law, was unusual. Thankfully, both speakers ran with the new format and delivered an exciting lecture on SSP, ballistic missiles, and the 1962 Nassau Agreement.

NHF President Rear Admiral John T. Mitchell, USN (Ret.) opened his talk about the SSP perspective on US/UK cooperation with a promise that he would be brief and use only one slide. Rear Admiral Mitchell knew many of the intimate details of Strategic Systems from the inside out. He worked with SSP for thirteen of his thirty-year career in the U.S. Navy, retiring after he served as its director in the early 1990s. He specifically discussed the fifty-five years of SSP history following the decade long decision for the British to use nuclear submarines and equip them with the POLARIS missile system.

“I want to start with the difficulties,” he said to open his talk, “about how getting a weapons system from another country can become very complicated.” Developing a ballistic missile system from the A3 to D5 that foreign countries like Britain also wanted took a lot of savvy business deals and cooperation. What strategy helped see those deals through along the way? No fancy computers or technology were necessary. “What’s important,” he said, “were the people to people interfaces that helped move the sales agreement along.” To him, personal interactions were “the glue that allows the arrangements that provide the foundation of understanding how two organizations can do good business.”

The US and UK finally drew up a document known today as the landmark Nassau agreement that set up the United States to provide the weapons system in principle to the United Kingdom – known as the Polaris Sales Agreement, or PSA. That agreement still exists between both countries. As Mitchell stated at the end of his introduction to his talk, “it is an unusual document [. . .] that has stood the test of time.” 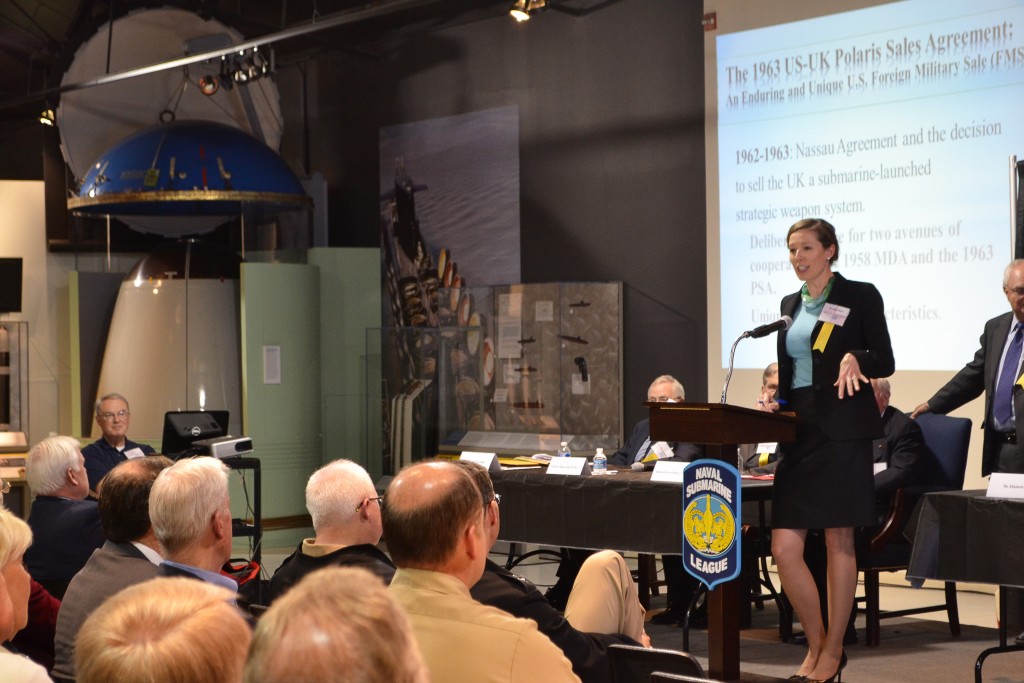 Missile production is only one side of the story. Nothing can be done until it’s put on paper. What happened to that document AFTER it was drawn up? How did we further cooperate with the production of missiles between the two countries?

The final speaker, Ms. Elizabeth Bahr, picked up where Rear Admiral Mitchell left off. She went into detail about the specific arrangements of the Nassau Agreement and PSA. Ms. Bahr is SSP’s Supervisory Associate Counsel for International Law and Arms Control Compliance and Implementation. Put simply in her own words, she is “really just a treaty attorney.”

Ms. Bahr has first-hand experience working with the PSA in her current position. To her, it’s a passion. She was the first to admit that she could “talk for hours about the PSA.” Indeed, she has intimate knowledge of the “incredibly unique” document that set up the brief agreement, totaling only twelve pages. That document, complete with its amendments and slight modifications, has stayed active since 1963. Ms. Bahr pointed out that, to this date, it is the only legal treaty AND foreign military sale. Put simply, it is both an arms export agreement and a treaty of law, which gives the United States “quite a bit of leverage.” The SSP Director essentially has the authority to dictate international law over the treaty. Such is the nature of a document created for its uniqueness “outside the system” of traditional arms agreements and treaties filled with bureaucratic meddling.

Rear Admiral Mitchell then discussed the next twenty years of US and UK cooperation under the confines of the PSA, marking the timeline of progression from the A3 to D5 missiles. According to Mitchell, engineers in the United States were busy designing the POSEIDON weapons system, followed rapidly by TRIDENT.

Eventually the British wanted to have the same system deployed in their Vanguard-class submarines as we had. As he pointed out, this was the first time that had happened since the 1960s. When they changed the weapon system, all they had to do is take off the word POLARIS and put in the word TRIDENT. Ms. Bahr brought the idea home with her final thoughts on the sales agreement. As a lawyer, she is still impressed with how well the same “enduring sales agreement” survives today.

“The genius of the way it was written with its provisions, allows any future modifications [. . .] to always integrate and innovate. Most importantly, it is the people that are the reason why this works, which have allowed our governments to cooperate to this day.”

A special thanks to the Naval Submarine League for helping us host the event. We look forward to next year!