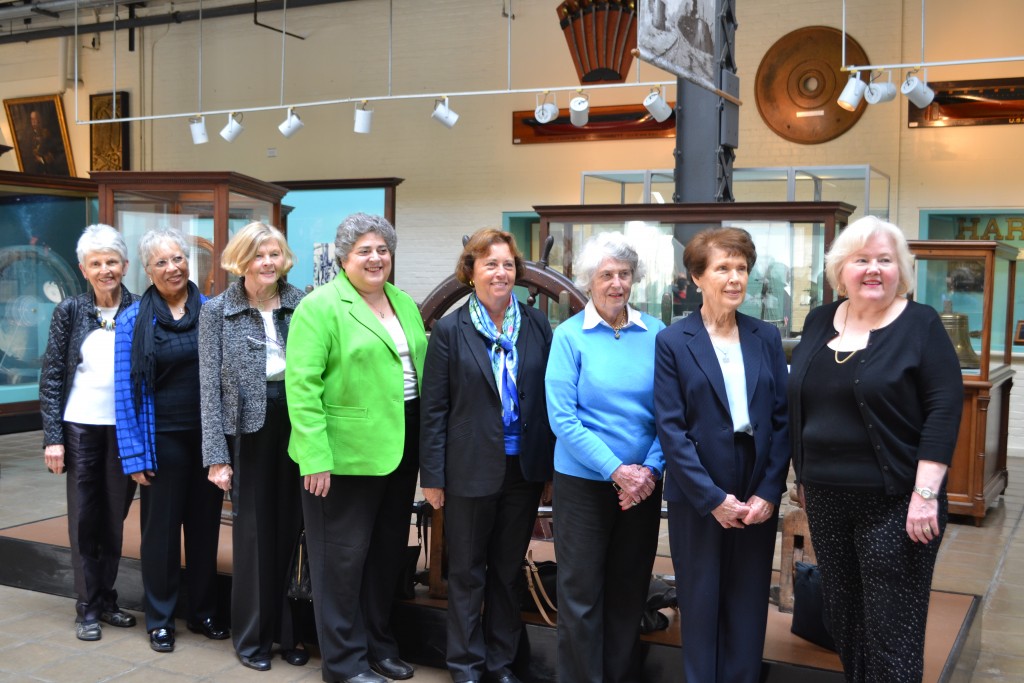 This past Monday, several members of the Society of Sponsors of the United States Navy came to the Washington Navy Yard to tour their facilities and interact with staff members of the Naval History and Heritage Command (NHHC). The Society itself has been around since 1908. According to their website, they are a group “composed of women who have taken part in the time honored tradition of christening a ship to be commissioned in the United States Navy, or a ship that sails with the Navy, supporting the fleet in some specific way.”  Dr. Barbara Billing, Society of Sponsors President, coordinated the trip with Phyllis Tolzmann of the NHHC Communications and Outreach Division staff. Dr. Pilling wanted to learn more about the breadth of activities offered at the Command and develop a future plan for accessibility to historical documents. As a Board Member of the Naval Historical Foundation, she also wanted to find out more about their relationship with NHF. In the end, the Sponsors developed a greater appreciation of Navy history, with many coming away learning much more about the ship they sponsor. 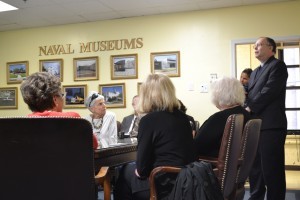 The day opened with an introductory meeting and Command over at the Naval History and Heritage Command Headquarters, located just above NHF offices. Rear Admiral Sam Cox, NHHC Director, spoke briefly about the mission of the Command and the important role that ship sponsors play in the creation of naval history. “We owe it to the public,” he said to the sponsors, “to remember their sacrifices and preserve the lessons learned.” For Cox, ship sponsors give a legacy and a name that “truly means something” for every sailor who serves onboard. It is that cohesion that formulates the esprit de corps of each ship in the fleet.

NHHC Deputy Director next gave a short presentation about the Command itself and the extraordinary progress they have made preserving naval history over the last decade. The greatest achievement to Kuhn was centralizing and consolidating the Navy artifacts to a facility in Richmond, VA over the last three years. That move propelled them forward “from a 68-year backlog of our Navy’s collection.”

The group moved next to Photo Archives. 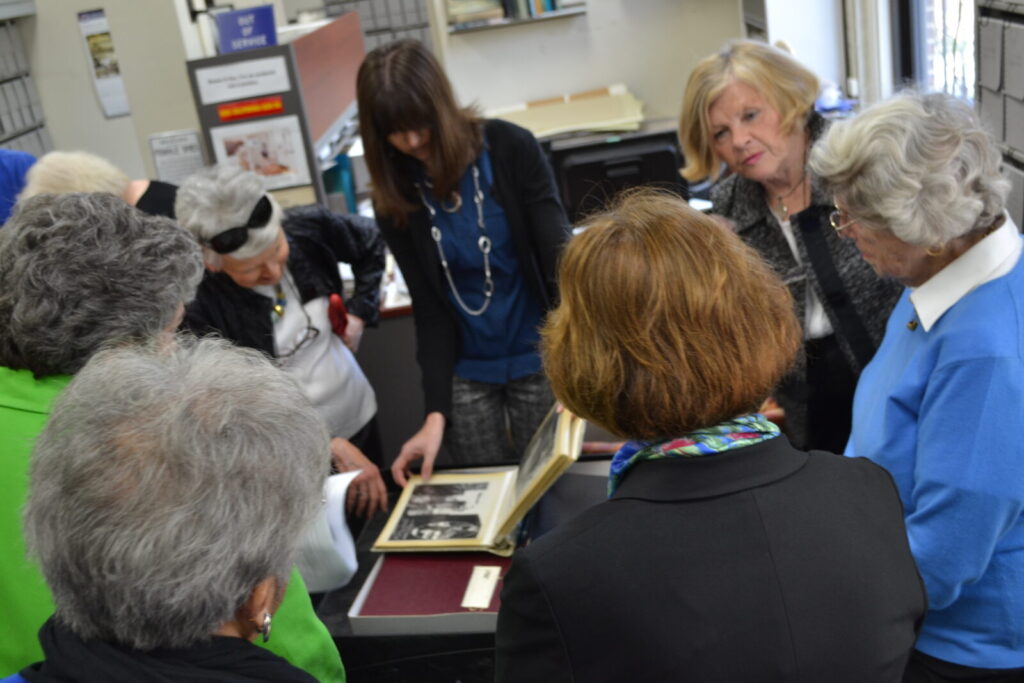 Lead archivist Lisa Crunk shows some of the sponsors materials within their collection.

David Colamaria, current photo archivist and former NHF employee who worked closely with the Society of Sponsors, greeted old friends and colleagues warmly when they arrived. “Your presence is everything in this collection,” Colamaria said as he waved his hand around the entire facility. He impressed the distinguished guests by showing them a number of photographs from the Society of Sponsors collection held there. Colamaria’s personal favorite items from the collection are the images taken at the annual Sponsor luncheon. The visit with Colamaria and lead archivist Lisa Crunk proved highly beneficial for historians everywhere, as several sponsors expressed a desire to donate their christening and commissioning photographs to the archive. Both Colamaria and Crunk were quick enough to pull some of their relevant files to show them more about their ships. 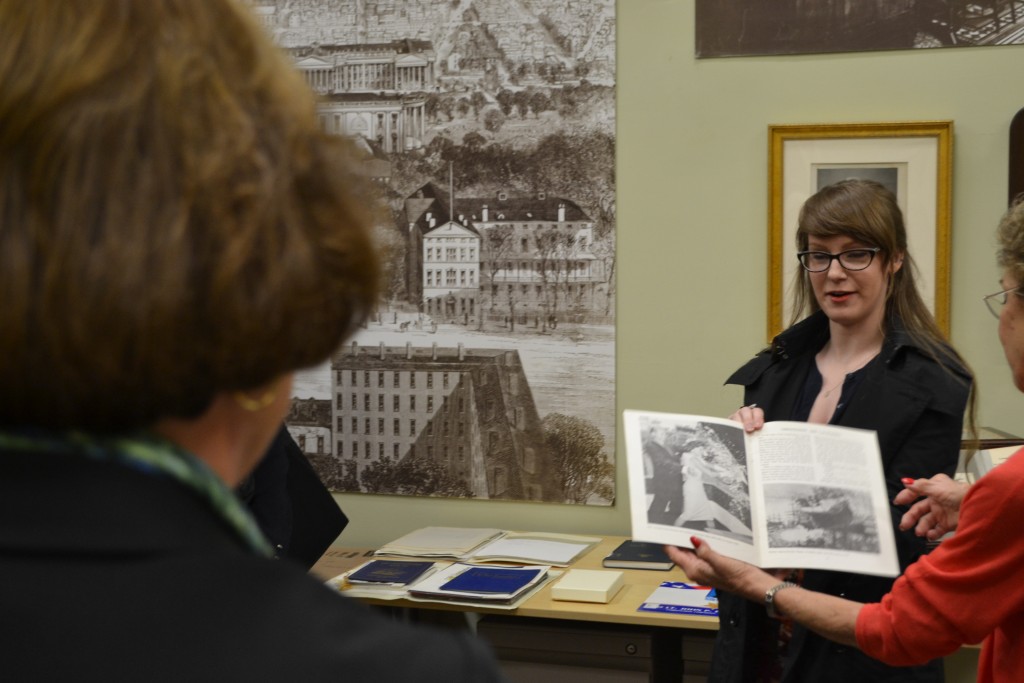 The sponsors moved downstairs from the archives and spent some time with Navy Department Library (NDL) Director Glenn Helm and his staff before being shown the library’s special collections room where a display of material related to the sponsors was laid out for viewing. It was truly a rare treat for all involved. One sponsor in particular, Ms. Rosalie J. Calhoun (sponsor to ballistic missile submarine USS John C. Calhoun), noticed a typographic mistake of her father’s name in one of the books written about the sponsors. Admiral William L. Calhoun’s middle initial was incorrectly placed in Ships of the United States Navy and Their Sponsors, 1958-1990. Glenn Helm asked her to make the correction (with an acid free pen) and sign her name by it. The women were tickled that in some way, history was being made for the permanent record. 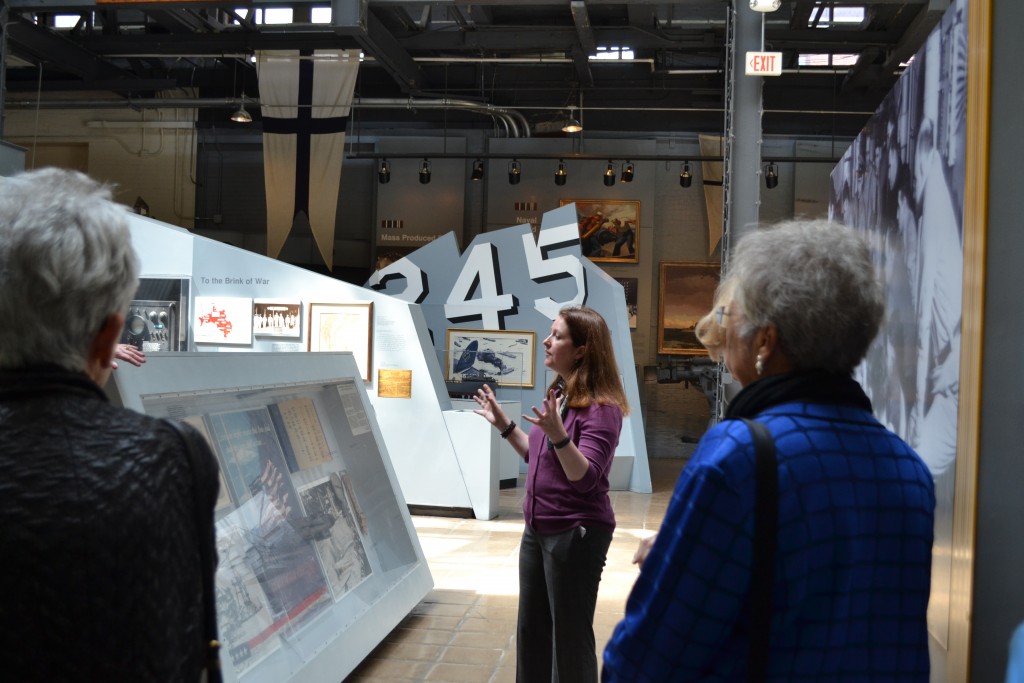 The visit to NHHC ended with a brief tour of several artifacts at the National Museum of the United States Navy (NMUSN). Curator Jennifer Marland showed the ladies several artifacts within the museum. Many of the women were particularly fond of the silver collection included in the NMUSN exhibit on the Steel Navy. Others were wide-eyed about the weight that history can have on our collective memory and understanding of American history. It is truly a powerful tool to remember and commemorate our past. “It’s been rewarding,” one of the sponsors remarked, “to see the connection of this history to some of the ships we have been a part of.”

Special thanks to Phyllis Tolzmann and Holly Quick for helping coordinate the event.

You can visit the Society of Sponsors website by going HERE.