It’s amazing what you can find at work.

When you work for an organization that’s been around since 1926, you are bound to come across some really interesting items untouched over the years. We aren’t talking Holy Grail here, but interesting nonetheless. One such item popped up at the office this week: 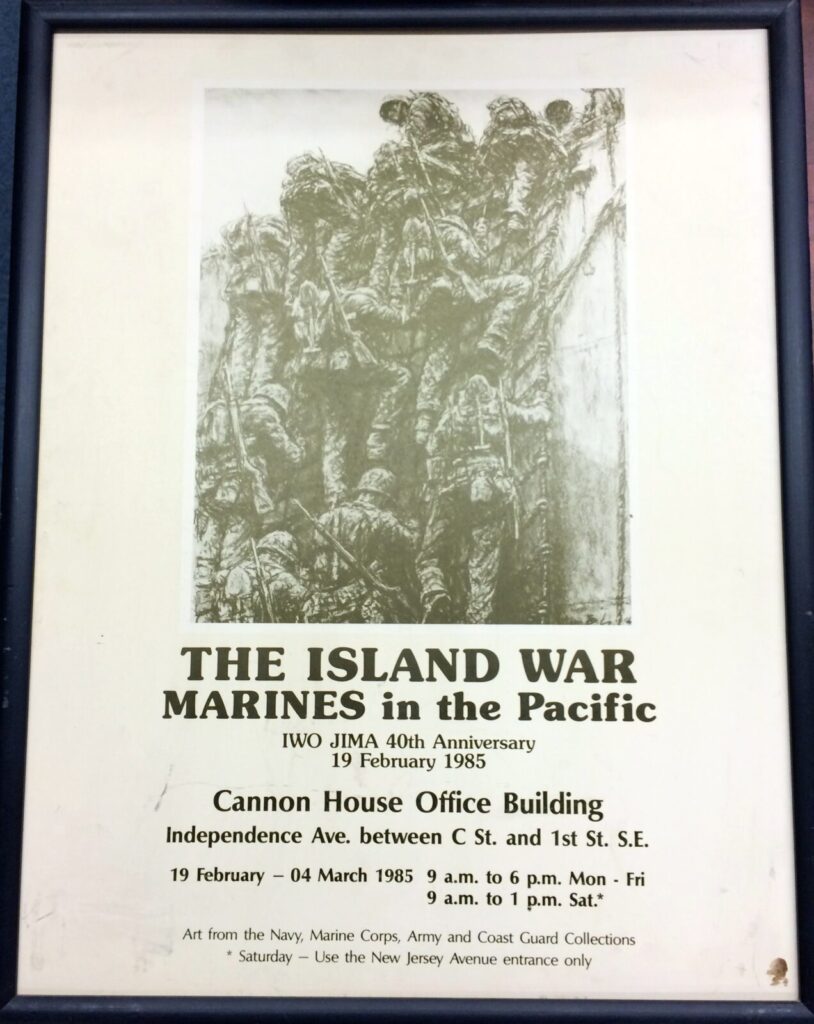 Poster found in the NHF Offices.

The edges were well worn and smelled faintly of mildew. Whatever pile of papers and books stacked above it stayed that way for a number of years – Dust marks of a forgotten past once again uncovered under fluorescent light thirty years later.

Looking at the faded poster, I knew I had to find more information about the exhibit. D.C. is home to thousands of art exhibit openings. It is a rare occurrence, however, to hear about one held in Congressional offices.

The Island War
In honor of the fortieth anniversary of the battle of Iwo Jima, a short art exhibition was held at the historic Cannon House Office Building in February-March 1985. The exhibit, titled “Island War: Marines in the Pacific,” drew from the collections of the Navy, Marine Corps, Army, and Coast Guard. Shown above is a framed poster promoting the exhibition. It officially opened on 19 February 1985, exactly forty years after the opening of hostilities at Iwo.

Events commemorating the anniversary of Iwo Jima like the Cannon Building exhibit were held around the country in February. Americans took a moment to reflect on the sacrifices of few for the benefit of so many. The majority of participation from veterans was in Washington, D.C. One day before the 40th anniversary of the landings at Iwo, a large ceremony was held at the Washington Cathedral. Over 350 combat veterans of the battle were present. A ceremonial wreathe laying at the Marine Corps War Memorial in Arlington and a meeting of veterans with President Reagan on the anniversary date rounded out the Capitol’s main commemorative efforts.

No mention of the exhibit opening was included in the long Washington Post article covering the Cathedral event or wreath laying. Only two short mentions in the “Museum and Galleries” section of the Post have the exhibit listed during the exhibit’s run in February and March 1985. 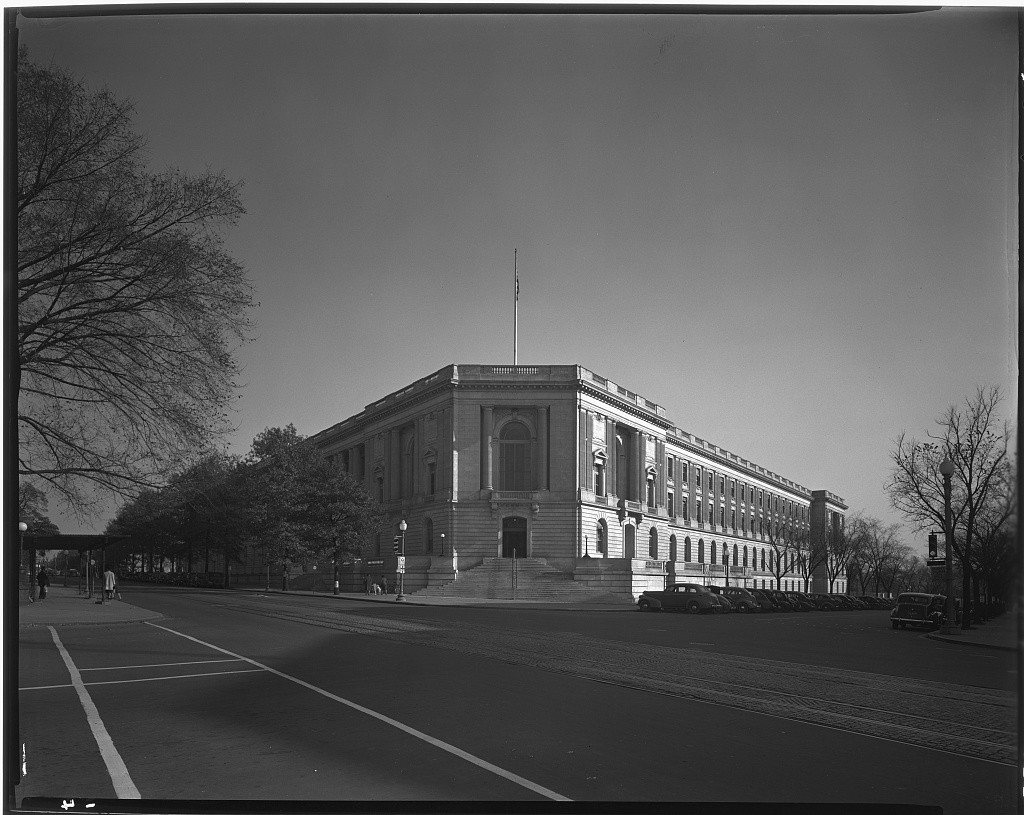 Located at the intersection of First Street and New Jersey Avenue, SE DC (bounded by First and C Streets), the Cannon House Office Building is a historic piece of architecture within the United States Capitol Complex, complete with elegant Beaux-Arts architecture and coffered dome. The Cannon building was the first set of Congressional offices outside the U.S. Capitol. Completed in 1908, the building is named for former Republican Speaker of the House and outspoken Woodrow Wilson critic Joseph Gurney Cannon. The USMC Museums Branch responsible for coordinating the exhibit displayed the artwork around the building’s picturesque rotunda.

According to an article about the exhibit written by Colonel Brooke Nihart in Fortitudine, the Congressional Marines Breakfast viewed the exhibit opening on the morning of 19 February, composed of former Marines now working on Capitol Hill in various capacities from Senators to Capitol Police (breakfast meetings are still a regular occurrence today). In the evening, the DC Council of the Navy League held a small reception in the Cannon Building.

Unfortunately, “there was too little art done of that battle to mount a full scale show,” said Nihart. Marine participation in battles from Guadalcanal to Okinawa filled gaps in the historical timeline around the rotunda’s Corinthian columns. All in all, twelve Marine combat artists were represented in the exhibit. 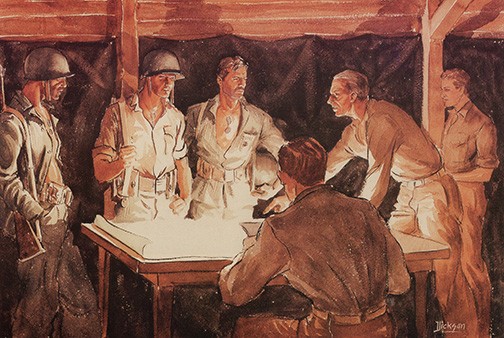 Col. Nihart’s summary of the exhibit is brief and heartfelt. He called the engagement at Iwo “the toughest nut to crack” of any theater during World War II. Few would disagree. By the end of the 36-day battle, over 6,000 men were dead, including one Navy Escort Carrier sunk by kamikazes. Nihart knew well about the combat stress and fatigue shown in each painting. Colonel Nihart himself was a World War II and Korean War veteran who fought at Wake Island and Okinawa as a gunnery officer aboard USS Saratoga. 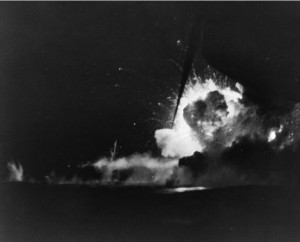 Nihart also remarked on the need for such an anniversary. Such an event seems odd, so close to the 50th in 1995. Why not wait for ten more years? Nihart noted that in ten years, he would “see only about half of today’s number.” Most of the Marines who fought at Iwo Jima were well into their sixties by the mid 1980s. Today, only a handful is still alive. Let’s hope their memory never remains as faded and weighted down as the poster I found on a short art exhibit inside the Capitol thirty years ago.

To all the men who fought and died on the sands of Iwo: Semper Fi.

If you like the poster, you can actually bid on it at NHF Sales, our ebay site.

This article was originally posted at District Curiosities.