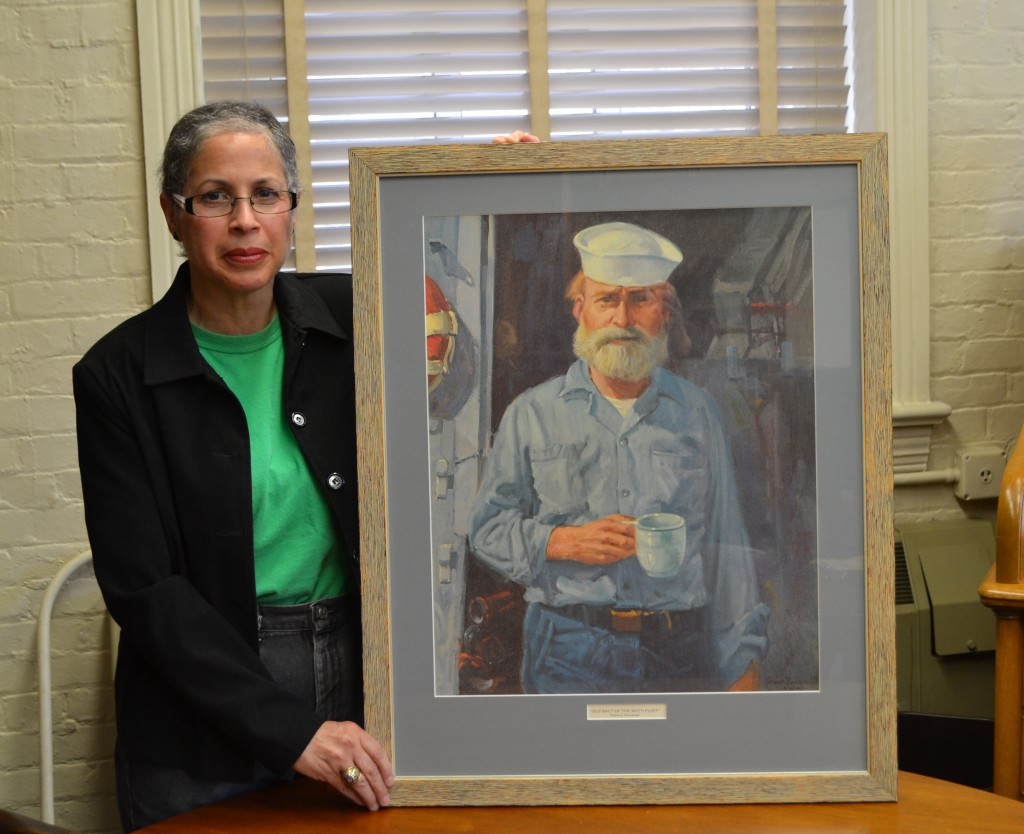 On Tuesday of this week, retired Navy CDR Caridad A. Vicente stopped by the NHF office to drop off a print of a painting done by well-known marine artist Frank E. Zuccarelli. The painting in question, titled “Old Salt of the Sixth Fleet,” is considered by many to be Zuccarelli’s most famous painting. The painting (88-163-AY) perfectly encapsulates its title: an old and seasoned sailor, complete with grizzled beard, faded dungarees, and a coffee mug. It’s simplicity of presentation for the subject matter makes this an interesting piece of artwork. Zuccarelli himself served with the Marines in the South Pacific during World War II. He later painted a large body of work for the Combat Art Collection, which included “Old Salt of the Sixth Fleet.” Zuccarelli died in Somerset, NJ, in 2012.

Print reproductions of Zuccarelli’s paintings like the one above can be seen everywhere from homes and offices to the Internet. The original 1972 painting, however, has an interesting place in recent naval history. “Old Salt of the Sixth Fleet” was highlighted as one of four paintings discussed in an April 2010 Naval History blog post about “Misappropriated Navy Art.” The article, written by Navy Art Gallery Head Curator Gale Munro, detailed the adventures of chasing down various pieces of art within the Navy Art Collection from their irresponsible borrowers.

According to the blog, the painting disappeared in 1998 in the Pentagon. When asked about the whereabouts of the painting, one staff member shrugged it off. Unconvinced, Navy Art Gallery staff went so far as to make a “wanted” poster for the priceless piece of art and posted it around the Pentagon. The painting was eventually found through the help of some careful research and backtracking by the staff. The painting had been given to a Pentagon official as a going-away present upon his departure. “If you don’t own something, no matter how many times it changes hands, ownership of the item doesn’t magically become legal at some point,” remarked Munro at the end of the post.

The painting is now back in the capable hands of the Navy Art Gallery with Gale Munro, better known by NHHC as the “Monuments Woman of Navy Art.” Special thanks to CDR Vicente for donating the print, which will be available as office decoration art.