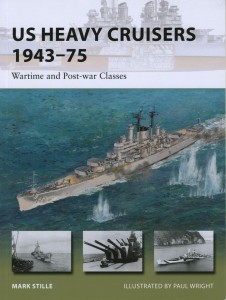 US Heavy Cruisers: 1943 – 75 is a gold mine of information concerning the U.S. Navy’s heavy cruisers of World War II and beyond. Mark Stille, a retired navy commander who has held posts in the intelligence community, faculty positions at the Naval War College, the Joint Chief of Staff with the fleet, is currently working in the Washington D.C. area as a senior analyst. To complete this book, Stille married his knowledge and expertise with the talents of artist Paul Wright. Mr. Wright, a Falmouth School of Art alum who has spent the last 14 years developing his art and perfecting his gift while a member of the Royal Society of Marine Artists. His artistry has truly brought this book alive with his outstanding illustrations and paintings.

This book begins by discussing U.S. cruiser weaponry. Starting before the war with an effective weapon in the 8”/55 Mk main guns to the development of the rapid fire 8”/55 MK 16. The reader is then walked through each successive class of heavy cruisers, from a brief history and description of the last of the Treaty heavy cruisers (the unique Wichita class) through to the Des Moines class completed with the new rapid fire 8” gun too late to see war service.

Surprisingly, Stille also provides a detailed description of the Navy’s CB’s, or “Large Cruisers.” All 808 feet, 34,250 tons of her built to fill the spot between the heavy cruiser and battleship. From there, Stille compares and contrasts each class of ship with enough detail to give you a real feeling for the size, weapons, armor and power of each class of ship. As well as describing the role of the heavy cruisers in the war effort such as ship to ship sea battles early on in the war to shore bombardment, supporting of troop landings and air defense where their 5” secondary and many 20 and 40mm medium range anti-aircraft weapons protected the fast aircraft carriers and transports. Following the war, the United States Navy was left with many heavy cruisers but no natural enemies. Orders were canceled, ships put into the reserve fleet, and others sold to foreign nations or the scrap yards. The Navy simply did not need such a huge number of heavy cruisers (or battleships, aircraft carriers, or destroyers for that matter).

When the United States entered the Korean War, however, the army needed the benefit of 8” guns for ground support of which was well suited for the heavy cruiser. During the Vietnam War the heavy cruiser again played an important supportive role. During the sixties and seventies, the author explained how the heavy cruiser was found to be well suited for updates, modification and modernization to their machinery electronics and weaponry. Some ships received minor updates, while other ships received extensive rebuilds and replaced turrets and 8” guns with sophisticated missiles, new radar, and sonar for sub hunting and killing capabilities. Stille does a brilliant job describing the evolution of electronics and weapons the navy was developing for its heavy cruisers. But as these World War II heavy cruisers aged and the continued advancement of weapons and electronics as well as the changing role of the navy, it became more cost effective to build new cruisers designed specifically for new weaponry. It was here that these heavy cruisers passed into history as distant memories.

Throughout this book, you will find facts and figures, comparisons and information concerning each class of ship. Stille packed a tremendous amount of information about these fine ships, the real workhorse of the navy for over 30 years. Stille’s infinite knowledge and excellent writing skills and the beautiful paintings and illustrations of Wright bring these grand and majestic warships to life. Not only did I enjoy this book immensely it will always have a place on my reference shelf for future use.

James H. McClelland Sr. is a frequent contributor to NHBR