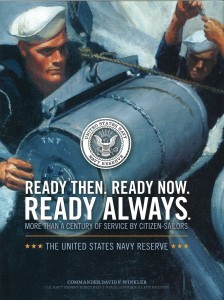 As managing editor of the Naval Historical Foundation’s Naval History Book Reviews I’m taking the prerogative of reviewing my own book as I have some thoughts about its production, content, and some subjects covered in the book that are worthy of additional serious scholarship.

The genesis of the book can be credited to several individuals. Captain John Lynn Shanton produced a self-published manuscript about the Naval Reserve for a 90th anniversary book and envisioned a book for the centennial. After reading the Wikipedia history of the Navy Reserve, former Chief of Navy Reserve F. Neale Smith contacted the Naval Historical Foundation to express embarrassment about the lack of substance, only to be told that the content had been taken from the Navy Reserve’s website. Then the Navy Reserve commemoration team recognized that a narrative history was sorely needed but having the Naval History and Heritage Command publish a book through the Government Printing Office would be an expensive proposition.

Instead, two former Chiefs of Navy Reserve, Vice Admirals John Totushek and Dirk Debbink opened discussions with the Naval Historical Foundation on the feasibility of publishing such a book through a non-profit consortium of Navy-support organizations. Vice Admiral Debbink, who presently operates a family-owned contacting company based in Nashotah, Wisconsin, agreed to chair a Naval Reserve Centennial Book Committee. Debbink used his leadership and entrepreneurial skills to assemble a remarkable editorial board to include two other former Chief of Navy Reserve and two Force Master Chiefs, and built a coalition consisting of the Navy League, Navy Memorial Foundation, Association of the U.S. Navy, and Naval Historical Foundation to publish and market the book. Furthermore, after reviewing the products and offers of several publishing houses who expressed interest in authoring and producing the book, Debbink came to the conclusion: “You know, we can do this ourselves!”

Debbink persuaded the leadership of the Naval Historical Foundation to make their historian available and through Navy Reserve connections was able to recruit Jeff Lukes of Saw Saw Creative based in Colorado to do the layout. Master Chief Jim Leuci made his archive of digitized images available and Captain Shanton provided research material from his efforts, earning both acknowledgement accolades on the title page as lead contributors. In addition, a dozen authors, most with USNR lineage, were recruited to write sidebars.

With less than a year to produce a book, the team proved up for the challenge. Regarding the narrative, the editorial board allowed the author to go in greater depth than what might be expected of a centennial commemorative piece. Thus, the reader will immediately realize that the catchy title of the book is somewhat of a misnomer. While it is evident that the Navy Reserve is “Ready Now,” history shows the force was not always “Ready Then.” At the outbreak of World War I, the number of Naval Militia and Naval Reservists available hardly met the Navy’s needs and it would take a good year to recruit and train the numbers needed for the war effort. During the 1920s and 1930s the Naval Reserve dropped thousands of billets and cancelled training due to budgetary priorities. When six air squadrons were activated in 1968 following the Pueblo incident, the aircraft were found incompatible for aircraft carrier operations and the squadrons were undermanned, requiring cross-transfers of active duty personnel. As for equipment, the reserves always seemed to make due with hand-me-downs. For example, during the age of the emerging steel navy, naval militia trained on wooden ships of the line. With Naval Reservist John F. Lehman serving as Secretary of the Navy in the 1980s, the Naval Reserve finally received equipment direct from the production line. Throughout the book, the cause and effect role played by politics is a recurring theme. The bottom line is if the Navy Reserve is going to be “Ready Always,” it needs to appreciate past instances where political support was lacking and continue to foster good relations within the Navy, on the Hill, and in local communities, especially in an era where many scholars are seeing an increasing disconnect between the military and civil society. Certainly, nationwide centennial celebrations will provide opportunities to bridge those divides.

To say that the Navy Reserve was not always ready then does not disparage the millions of men and women who served in the Navy thanks to the existence of the Naval Reserve Force/Naval Reserve/Navy Reserve. Individually they were ready and willing and if you consider the context of the service and sacrifice of these individuals throughout the 20th century and into the 21st, the book’s title holds up well. One of the benefits the Navy Reserve is it has provided a portal for talented individuals to serve the Navy who otherwise would not have the opportunity through normal enlistment and officer commissioning programs. The artist who created the recruiting poster used for the cover – McClelland Barclay – was a successful commercial artist who joined the reserve because he had an affinity for the Navy. He would lose his life when the LST he was embarked on was torpedoed in July 1943 by a Japanese submarine. During World War I and II the Naval Reserve provided an opportunity for women to serve, and the book pays homage to these fine Sailors. The Naval Reserve also provided officer commissioning opportunities to men and women of color during World War II. Of personal note, I was commissioned by Vice Admiral Sam Gravely at Penn State back in 1980, the Navy’s first African-American admiral who obtained his commission through the V-12 program during World War II.

While the book goes into greater depth than what might have been expected for a centennial celebratory work, it still is a general survey and there are topics touched on that deserve greater historical scrutiny. The naval militia movement within the context of the Gilded Age could be a fascinating topic to examine the interface between the Naval Militia and social elites within their respective communities. Ready Then, Ready Now, Ready Always touches on how some in the regular Navy looked down upon the militias as egocentric yachtsmen. For a historian of labor studies, the animosity between the Naval Reserve Officers Association and the Bureau of Navigation in the 1930s could be examined within the context of labor/industrial relations during that era. Finally, a topic for a Cold War historian to further explore is the Berlin Crisis of 1961 from the perspective of the recall of some 500,000 reservists from the different reserve service components. The political repercussions would have implications on the use of the reserve component for decades to come.

Dr. Winkler is the historian in residence at the Naval Historical Foundation.