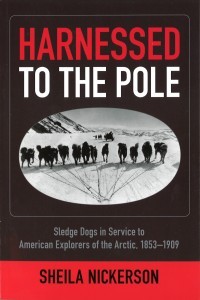 The North Pole was the ultimate prize. Before aviation, ships could only go so far thanks to polar ice. The best way to travel, with supplies and food, was by dog sledge. However, the British Royal Navy made men, not dogs, haul sledges for Sir John Franklin’s expedition, when he was searching for the Northwest Passage and the North Pole. The Franklin Expedition with its two ships, Terror and Erebus, left England on May 19, 1845, and was last seen by a whaler in Lancaster Sound on July 26, 1845.

Many explorers from around world in the second half of the 19th century hoped to stake their claim on the Arctic by reaching the North Pole, the highest goal attainable. The greatest success came to those who recognized that the fastest way to travel was by using a team of hardworking sledge dogs driven by native men. This book reveals how critical dogs were to Arctic conquest. Besides transportation, sledge dogs drove off predators, helped in hunting, found their way through devastating storms, and provided warmth. They also faced cruel conditions, rough handling, starvation, and the possibility of being left behind if injured or too weak. The dogs were exploited and discarded, no matter how loyal they had been.   Nickerson gives a picture of the rugged, tenacious and most vital animals. Without them, the great arctic journeys would have been impossible. Nickerson recounts their stories with fascinating detail, giving these magnificent dogs the recognition they deserve.

Americans were among last to enter the effort to find Franklin and reach the geographic North Pole. American expeditions covered in this book include those of:

It was the Americans that came late into the Franklin search late (and increasingly intent on claiming the North Pole), who made consistent use of dogs, and began to write about their exploits. Most of the dogs came from Greenland as well as from Newfoundland and Alaska. The Greenland dog was an ancient breed tracing back to original Inuit dogs from Siberia with remains found as far back as 7000 BC. The Greenland dog is also known as the Esquimaux Dog and Greenland Husky. The Greenland dogs and the Inuits forged a bond even though the men used a whip (six yards long) as a tool for driving the dogs. Conditions were treacherous for men and dogs. Sometimes when food was scarce, dogs might be fed once a week. The dogs were named and known as individuals to their drivers.

The dogs were harnessed individually in a “fantail” hitch allowing dogs to spread out in front of a sledge in semi-circular fashion, not the two-by-two tandem more commonly used today which is suitable for narrow trails and forests. The fantail hitch enabled the dogs to work around large chunks of ice. The most spirited dog had a longer trace and was proclaimed leader.

U.S. Navy connections abound. A First Day Cover issued 1959 for “50 Years of Arctic Expeditions, 1909 – 1959” honored Robert E. Peary as the “Discoverer of the North Pole.” Peary was on leave from the U.S. Navy during explorations, but was later made a Rear Admiral. Hall’s Polaris expedition had Congressional support while Hall had to report to the Secretary of the Navy. Elisha Kent Kane was a Navy doctor traveling under orders from the U.S. Navy. Several images in the book were credited to the Naval Historical Foundation.

The background information is extremely well detailed in chapter notes. There is an extensive bibliography and index. The book is well illustrated with images on the construction of sledges, harness, and dogs. Numerous maps are used throughout.

This compelling story is a must-read for Navy historians with its fascinating details of Polar history. Utilizing new sources and original research, Nickerson provides the magnificent dogs the recognition they deserve. She portrays them as the most rugged, tenacious and significant polar travelers. Without the dogs, these explorations would have been impossible.