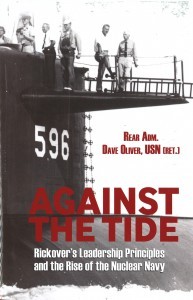 Rear Admiral Dave Oliver, USN (Ret.), A 1963 graduate of the U.S. Naval Academy, was a nuclear-trained submarine officer who spent thirty-two years leading within the U.S. Navy. After retirement, he served as the Principal Deputy Secretary of Defense for Acquisition, Technology, and Logistics during the Clinton administration. In the Bush administration, he was the Director of Management and Budget for Coalition Forces in Iraq. He also held executive positions with Northrop Grumman and Westinghouse, and become the CEO of the EADS, North America Defense Company. His purpose for writing is to share a lifetime of acquired knowledge and practice in the art of management and leadership.

Against the Tide: Rickover’s Leadership Principles and the Rise of the Nuclear Navy is Dave Oliver’s second book on leadership. His first book, Lead On!: A Practical Approach to leadership (1992), distills some hard learned lessons on leading from his naval career. Since both books discuss leadership with the idea that leadership principles have wide applicability both in military and civilian organizations, there are areas where the two books cover similar ideas. With another twenty-two years of perspective, experience and wisdom gained in his post navy career, however, Rear Admiral Oliver does not succumb to just updating his ideas. He instead presents numerous vignettes he tackles the leadership principles of one of history’s more controversial figures, Admiral Hyman G. Rickover.

I loved this book. At first, I could not say why. After finishing the book, I could not elegantly state what Rickover’s leadership principles were, or where Rear Admiral Dave Oliver listed them in the book. I discussed that with one of my peers who proposed that I simply enjoyed the stories. I did enjoy them. Oliver is a masterful storyteller, but that wasn’t it. The chief appeal of the book is that it made me think.

In Oliver’s earlier book, Lead On!, each chapter is focused on a key leadership idea, supported with judiciously selected anecdotes to illustrate the principle. At the book’s end, Oliver includes a chapter that summarized each point to tie the whole together in a tidy, well-organized package. Against the Tide does not follow that pattern. Instead, it leads the reader to engage the challenges faced by Rickover as he sought to integrate an entirely new technology into navy culture. Oliver does this by telling stories related to the rise of the nuclear navy. The stories are often Dave Oliver’s personal experiences, as he was positioned throughout his career to observe Rickover’s actions. He also integrates various perspectives from many other officers who served. The memoirs of numerous retired officers, interviewed by Paul Stillwell and published by the Naval Institute, populate the bibliography.

Readers will not find a summary of Rickover’s leadership principles within the book. Instead, Oliver asks a series of Socratic questions at the end of each chapter that, if honestly reflected upon, will divulge principles, where they were used purposely and consistently, where mistakes occurred, and that will inform judgments about using them to bring about cultural change or manage a start up in their own circumstances. Oliver is not trying to persuade his readers to copy Rickover, but to examine him. I am sure I will find myself reading this book again and I have already recommended it to others.

During his naval career, Dave Oliver also observed the leadership of Admiral Elmo R. Zumwalt. As a bonus, in the chapter titled, “Elephant Instincts,” Oliver contrasts Zumwalt’s leadership with that of Rickover. While these men were not rivals, neither shared the same goals and vision for the navy. Oliver judges Rickover’s efforts to build a nuclear navy and a culture that would sustain it completely successful. In contrast, considering the differences in time available (decades for Rickover and four years for Zumwalt), the latter only made progress toward his goals. Oliver invites the reader to ponder which methods were effective and which less so. He does not crown a winner, but asks how each leader might have benefitted from the methods employed by the other.

The book contains a comprehensive bibliography and index. The endnotes do provide some source information for each chapter, however, they mainly serve the role of providing ancillary information—some notes that did not make it into the body of the work are over a page long. Much of this material provides additional insight into Rickover’s leadership and if not read in conjunction with the main body of the book, loses context. Full understanding necessitates frequent flipping back and forth from the notes to the chapter at hand. For example, Oliver devotes a chapter to Rickover’s controversial interview process, wherein the Admiral personally approved each officer’s entrance into the program and Oliver’s own interview experience is buried in the notes.

That criticism aside, anyone aspiring to leadership can benefit from reading Against the Tide. I do not recommend it as your first book on leadership, particularly if you are a junior leader. Your time would be better spent with Lead On! If you have read other leadership books, or are at a middle level or higher position in your organization, this book will richly reward your effort.