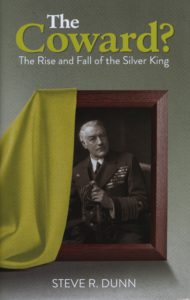 What is cowardice? Can cowardice be reinterpreted as an act of reasoned restraint or self-preservation? Is cowardice situational, or is it a character trait? Does it possess a moral dimension? That is, “Can a brave man also be a coward?”

These are the questions author Steve Dunn explores in his biography of Ernest Trouridge. A Coward? The Rise and Fall of the Silver King is Dunn’s second biographical work, once more examining the life of a noted Royal Navy officer of the Victorian and Edwardian era. It is a story of a man “thought to be brave, and of great lineage who, for one instant’s decision, was forever associated with an act that many saw as that of a coward.”

Through the life of Earnest Troubridge, readers learn what happens when a single act of what many consider to be cowardice follows a naval officer throughout the remaining years of his career and beyond the grave. We glimpse into the far-reaching effects of that single act, not only for Troubridge, but for Britain and its allies, years later, as the events of the Great War of 1914 unfolded.

Troubridge came from one of Britain’s great naval families beginning with Earnest’s great grandfather, Sir Thomas Troubridge. Sir Thomas, served with Nelson as a midshipman and rose through the ranks to become one of his ‘band of brothers.’ He was considered by Nelson to be “…the most meritorious sea officer of his standing in the service.” As with Nelson, Earnest’s lineage was rooted in the English countryside of West Norfolk, an area of England that this reviewer knows intimately. Troubridge’s mother, the daughter of a wealthy Norfolk banker, Daniel Gurney, was also from another famous naval family – that of Thomas Cochrane – the ‘seawolf’ of the Napoleonic Wars.

Born in 1862, Earnest came from an aristocratic and wealthy family whose social connects included royalty. He was the product of the British ‘public school’ system. As a younger brother, his life’s profession was either the Church of England or the Royal Navy. As Dunn wrote: “He could hardly have done anything else with the example of his ancestors before him.” At the age of 13, young Earnest Charles Thomas Troubridge entered the Royal Naval College, Dartmouth, otherwise known as HMS Britannia.

The author then portrays Troubridge’s rise through the ranks of the Royal Navy. He shows how this man of pedigree obtained high rank through influence and a promotion system that relied less on initiative and merit than being the next in line. His assignments found him mostly in the Mediterranean, but were interspersed with assignments to North America and the Pacific. The latter of the two were career changing for the man whose massive flock of hair turned silver-grey. He came to be known throughout the Fleet as the “Silver King.” The ‘most handsome officer in the Fleet’ married the bell of Halifax in 1891. His marriage appears to be a typical one for someone of Troubridge’s background. It ended with his wife’s tragic death after the birth of his fourth child, a stillborn, in 1900. He would later remarry in 1908 to a much younger woman. She was Margot Elena Gertrude Taylor, more commonly called by her family as Una. She was beautiful, intelligent and artistically gifted. Their marriage would fall apart, primarily due to Troubridge’s attitude toward a “wife’s duty” and Una having a relationship with John, aka, Marguerite Radclyffe-Hall.

Whilst the flag lieutenant of the North American Station, he became friends with one of the squadron’s captains – the future King George V. Their friendship would last for over a quarter of a century. For Troubridge, it was career enhancing.

In 1901, Troubridge became the Naval Attaché to Japan, where he witnessed the effects of modern weaponry on men and ships during the 1905 Russo-Japanese war. The author leaves the reader with the impression that the experience would play a part in Troubridge’s decision when confronted with what would have been the first clash of modern warships during the Great War.

This comes to pass in 1914 with the outbreak of the Great War. Troubridge is back in the Mediterranean as second in command of the Mediterranean Fleet as well as the commander of the First Cruiser Squadron, which consisted of four armoured cruisers. The powerful German battlecruiser Goeben and her consort the light cruiser Breslau were stationed in the Mediterranean at the time threatening French troop convoys departing Algeria for metropolitan France. The two ships proceeded to join the Austrian Fleet, they would potentially tip the naval balance of power in favor of the Triple Alliance. The author does a creditable job describing the uncertainty on the part of the British about German intentions, as well as the difficulty that the Commander in Chief of the Mediterranean Fleet, Admiral Milne, and his second in command, Troubridge, had in reconciling the instructions emanating out of Churchill’s Admiralty, especially the instructions to him about not engaging a “superior force” with his cruiser squadron.

Initially, Troubridge had every intention of engaging the German battlecruiser and her consort just before daylight in the hope that it could negate Goeben’s superior firepower and maneuverability. After listening to his flagships captain’s appeal as a gunnery expert that the admiral should not engage, Troubridge, keeping his own counsel, sent a signal to his superiors that he had given up the chase only hours before the expected engagement. The Germans sortied to Turkey. Troubridge faced court martial for his decision. Although he was exonerated, he would never assume command at sea again. Neither would the Commander-in-Chief of the Mediterranean Fleet, Admiral Milne.

Although author captures the events leading up to the ‘decision’, I would have liked to see a map or two showing the overall situation in the Mediterranean at the time as well as a tactical plot showing the movements of the antagonists. A few additional photos of the ships would have complemented his section on the respective order of battle between the antagonists. I had hoped the author would have also included photographs of the main characters as well.

The first Rear Admiral Sir Christopher Cradock’s decision to engage the powerful German squadron under Vice Admiral Von Spee at the Battle of Coronel in November 1914. The battle was a disaster for the Royal Navy. In a letter written before the battle, Cradock specifically stated that he would not suffer the same fate as Troubridge.

The second consequence was the decision by Commodore Henry Harwood RN to engage the Panzerschiff Admiral Graf Spee at the Battle of the River Plate twenty-five years later. This decision, however, had more favorable results for the Royal Navy. In contrast to Troubridge’s missed opportunity, Harwood demonstrated that with imagination and determination, a well-trained, but inferior force can succeed in battle. Harwood’s squadron of three cruisers forced the Graf Spee to seek refuge, leading to her eventual destruction by her captain’s own hand.

Although Troubridge was never given another sea-going command, he did provide worthwhile service, co-operating with the Serbs in their war against the Austrians and their allies. He was also given command of a force on the Danube in 1915. After the war he returned to the region to supervise the Inter-Allied Danube Commission, and Mr. Dunn shows that Troubridge was an effective administrator. He returns to Britain in 1923 with tremendous accolades for his service. He returned to a broken and scandalous marriage as well as continued controversy regarding his decision not to engage the Goeben. Ironically, because of the Royal Navy’s promotional system of the day, Troubridge is promoted to full admiral. For this, the navy he served for over 40 years shuns him. He lives for a short while afterwards as a self-imposed exile in France.

Although Mr. Dunn does not unveil new information concerning Troubridge’s fateful decision, the author’s chapter “Verdict” weighs all the factors in a very concise manner. He succeeds in painting a picture of Troubridge as a man of his time and of his ‘pedigree’, “…a somewhat vain and self-obsessed character…” who ultimately failed in his most important duty as a naval officer — to fight with determination, imagination and skill.

Although a century has passed since the ‘decision’, I feel this book will resonate with serving officers, who like, Troubridge, serve in a navy that had not faced inter-state war at sea through their careers. As with Troubridge’s navy, the U.S. Navy of today lacks the collective memory of what war at sea can be. When and if that time comes, will they fight with determination, imagination and skill?

Captain Rodgaard leads the National Capital Commandary of the Naval Order of the United States.