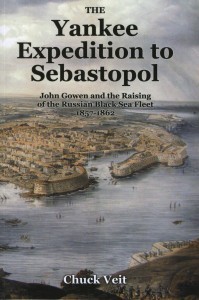 By Chuck Veit, published through Lulu.com (2014)

Forty years ago, I picked Commander Edward Ellsberg’s On the Bottom off the bookshelf of an elderly friend, a favorite from his own boyhood. The story of the raising of the submarine S-51 from 132 feet of seawater off Block Island in 1925 was my first introduction to the world of the salvor and the bitterly punishing and dangerous trade of the traditional “hard hat” deep sea diver. I hadn’t been back there until I read Chuck Veit’s The Yankee Expedition to Sebastopol: John Gowen and the Raising of the Russian Black Sea Fleet, 1857-1862.

Most Americans know the Crimean War only through The Charge of the Light Brigade, Florence Nightingale, Tolstoy’s Sebastopol Sketches – and perhaps the armored floating batteries that provided the inspiration for the ironclad warship. However, the war crippled Russia’s naval power in the Black Sea and frustrated its designs on Constantinople for a generation. It also left the fortress city of Sebastopol in ruins and its fine harbor blocked and littered with perhaps 90 wrecks, including fifteen sailing ships-of-line and nine very valuable iron-hulled steamers. In 1856, the Russian Imperial government approached Boston entrepreneur and self-taught engineer John Gowen to undertake the task of raising this fleet – still the largest salvage operation in history and one of the first to contemplate raising large ships intact from considerable depths of 60 feet.

Who was he? John Gowen was a briefly celebrated private citizen. The author had to piece together his portrait of the man and his achievements from his speeches, contemporary newspaper reports, and letters. The story begins with his first experiments with metal helmet diving gear – invented by the English Dean brothers in the 1820’s to enable firefighters to enter a burning building without being overcome by smoke. Its potential for diving was soon recognized and was successfully used to salvage guns from a wrecked warship in 1836. Gowen and his partner Wells used it for salvage, improved it, and marketed their own version of “Submarine Armor,” basically the same design used for all diving for more than 100 years, until the invention of SCUBA gear. Its use was incredibly hazardous. “Death could come from the slightest of mistakes: the failure of the pump, a break of the supply hose, or a careless stepping on the air tube as it lay along the deck.”

It also brought great rewards. Success led to an exploit that brought Gowen to the attention of the Russian Grand Duke Constantine and the removal of the wreck of the steam paddle frigate USS Missouri from Gibraltar harbor in 1852 after she had lain there defeating all efforts of British salvors for nine years. Gowen signed a contract with Russia in 1856 to clear Sebastopol by 1862. In return, he would receive half the value of all the ships and material brought up – an estimate worth 65 million dollars – and began assembling his men and equipment in Philadelphia.

There are three basic methods for raising a sunken ship: by crane, by making it buoyant by filling its hull with air, and by attaching external flotation devices. Gowen intended to use the last, much like Ellsberg did when he raised the S-51 with pairs of metal pontoon floats. Each pair was connected by a chain slung under the keel of the sub, which supported and lifted the vessel between them. Gowen built four huge wooden “caissons” in Philadelphia, with each one 50 x 50 x 13 ft., displacing 1,040 tons, and built two more even bigger at Sebastopol, both 100 x 65 x 64 ft., displacing 4,576 tons. But it was the attachment of the chains which posed one of Gowen’s most difficult problems. All of the exposed wood of the hulls was honeycombed by the tunnels of the “teredo navalis,” or shipworm, reducing it to a state of paper like fragility. The chains could not be passed through the hulls, which was Gowen’s original plan. Only the fact that the lower sides of many hulls were covered in many feet of soft mud protected them from the shipworm and left them strong enough to be lifted. But how did they get the chains under their keels? It was necessary to devise novel ways for the divers to tunnel under their hulls so a line could be passed through to pull the chain sling out the other side of the ship.

Gowen went to work in 1857 demolishing wrecks and removing them piecemeal. It was only in 1858 that he began to bring up completely intact ships. At this point, it would be most interesting to know if he was truly the inventor of the caissons, or the first to use this technique of raising ships with such rigid external floats. This is suggested by the fact that both at Gibraltar and Sebastopol another man’s earlier invention was tried without success: “camels,” or inflatable canvas, and rubber floats. These all burst at only partial inflation pressures; plainly the materials of the time were inadequate to justify the concept. But more to the point, Gowen was the master of finding solutions that worked, adopting whatever came to hand and surmounting all unexpected technical glitches. He was a man of many parts – the epitome of the brash, self-confident, but big-hearted stereotypical American. When asked by the governor of Gibraltar if he knew that the Missouri had defeated the best of the world’s engineers, he replied “May I enquire of Your Excellency if any of these engineers were Yankees?”

He was undaunted in the face of setbacks, not the least of which were some very dirty tricks played on him by the Russian government. His can-do generosity was revealed by his personal crusade to restore and protect the graves of the English, French, and Turkish soldiers who died at Sebastopol, which he found in a state of total neglect. Chuck Veit has single-handedly rescued Gowen from oblivion and given this impressive and attractive character his place in history. As a self-taught natural engineer, Gowen’s story is inherently interesting, like that of the Wright brothers, John Holland, or Barnes Wallis. Mr. Veit does not appear to be an academic, but he writes fine history based on meticulous, imaginative research. This book will provide a rewarding read for anyone fascinated with the long story of man and the sea – but it is definitely required reading for those interested in the history of the art of the salvor or nineteenth century technology.

This book is self-published by the author, and it’s worth noting how the computer has made this type of work so much more accessible to its intended audience. In days gone by, I could only have encountered such a work by chance, browsing booksellers’ shelves or catalogs. Today they are readily available online. This goes far to make such research into the neglected corners of history far more rewarding to those of us who are addicted to it.

Robert P. Largess is the author of USS Albacore: Forerunner of the Future and articles on USS Triton, SS United States, the invention of the towed sonar array, and the history of Lighter-Than-Air.