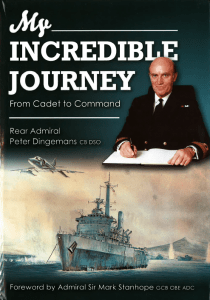 In his autobiography, Rear Admiral Peter Dingemans writes about his service in the Royal Navy from his days as a cadet at the Britannia Royal Navy College through his assignment as Chief of Staff to the Commander in Chief Fleet as a Rear Admiral. Admiral Dingemans’ book is divided into three distinct sections. The first and third parts provide the reader of his service in the Royal Navy prior to and after the Falklands War. The second part is the most detailed, as it pertains to his command of the amphibious assault ship HMS Intrepid L11, “the most challenging time in the Falklands conflict.”[1]

The Admiral’s father was from South Africa. He studied in the UK to be a doctor. He met the Admiral’s mother, a nurse, and together they established a practice in West Sussex. With the war, his father joined the Royal Navy as a doctor. He loved his wartime service and remained in the reserves through his eighties. This had a distinct influence on young Peter, who passed his entrance exams and then found himself accepted to the Royal Navy College just in time to assume his first duty as a guard among those lining the street for Queen Elizabeth’s Coronation. This thrilling event for a young “Snotty” was doused with verbal cold saltwater when the captain of the college told him and his term that they were “the worst term in the entire history of the college…” What a start to 37 years of service in the Royal Navy.

His afloat training included three months on Britain’s last battleship, HMS Vanguard, as well as another three months on the light cruiser HMS Superb. It was onboard Superb that Dingemans’ first interacted with the United States Navy occurred. I found this part of his book an interesting comparison to the curriculum between the US Naval Academy and that of the Royal Naval College. There seems to be a great deal more training at sea than in the classroom for the former during the 1950s.

Whilst Superb was anchored in Guantanamo Bay, Dingemans visited the shore facilities there. “There was Coca Cola on tap and more impressively — to ration-starved Brits — the PX/NEX stores […] selling a gang of consumer goods.” For me, reading this passage brought back a very early memory of me holding my mother’s hand as we stood in a ration queue in England during the summer of 1952.

The second part of his book deals with his command of the assault ship HMS Intrepid prior to and during the Falklands War. For me, this part of the book is worth the purchase. It provides unique insight into the realities of amphibious operations, especially in an intensive combat environment. I found his explanation of how a ship like Intrepid was able to float off and then recover its landing craft from its well deck straightforward and uncomplicated. As Admiral Dingemans said, the process “…illustrates why later in the Falklands conflict I was worried about making myself a sitting duck during amphibious landings.”

He did an excellent job discussing what it takes to bring a ship back to life and send her off to war. When Argentina invaded the Falklands on 2 April 1982, Intrepid was already in dry dock awaiting to be sold or transferred to reserve status and eventual disposal. On 5 April, Dingemans had just completed handing over his ship when he was ordered back to Intrepid to work her up as quickly as possible. This was a daunting task. As the author wrote, “A ship in Reserve resembles a filleted fish. You’re left with the bare bones and a dismembered body.” All but twenty-two of the ship’s company were returned to their old ship. In 17 days, the ship was considered ready to head south and after a working weekend, Intrepid left Portland on 26 April.

Throughout Admiral Dingemans’ experience during the Falklands War, I was reminded of how warships will perform tasks their designers never envisioned them to do. This can be seen in the Admiral’s own words when he relates the various tasks that Intrepid was call upon to do:

“Little did we realise that over the next five weeks we would play host to 4,750 visitors. We were to have on board the Commandos and Paras, the Scots Guards, the SAS and the Gunners. We would be used for the reception of casualties, prisoners, fire fighters and Special Forces. We ferried troops, went mine hunting and acted as an Exocet decoy. We repaired ships, washed laundry and operated helicopters and landing craft throughout the war.”

Admiral Dingemans goes to considerable lengths to show how versatile Intrepid was during the campaign. His story would have benefited from a map showing his ship’s positions. They would have complemented his passage reports and recollection of his part and that of his ship during the war.

I found two very useful tools a commander must be cognizant of using to support his or her subordinates in the performance of their duties whilst under the tremendous stress that only combat creates. The first Admiral Dingemans stresses is communication. “While sailing to Ascension we honed our existing communication systems so that we kept the whole ship informed […] People can cope with many terrible things if they know what dangers they face and can trust those commanding the ship to keep them up to speed.” He especially kept the communication links open to the ship’s company during the many air raids Intrepid experienced whilst operating, mostly at anchor in San Carlos Water. “Throughout the raids I had the ship’s main broadcast in my hand and as events occurred I relayed them to the ship’s company. This I was able to do while under attack until the end of hostilities some 24 days later.”

I found Admiral Dingemans’ book an important addition to the British narrative of the Falklands War, especially from the perspective of a ship’s commanding officer. For that alone I would recommend it to all who practice the amphibious art.

Captain Rodgaard heads the National Capital Commandery of the Naval Order of the United States.