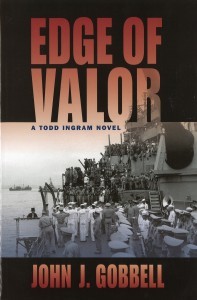 If you have read the first four books in the Todd Ingram series, you will have followed Commander Ingram’s World War II exploits from the siege of Corregidor, through Guadalcanal and the Solomons to the Indian Ocean onboard a Japanese submarine. The Edge of Valor finds Ingram off the Japanese home islands as the war was in its last days. Atomic bombs have devastated Hiroshima and Nagasaki. Japan is threatening to come apart as behind-the-doors negotiations determine surrender terms and the shape of post-war Japan. As the United States and Russia jockey for position in the post-war world and the Navy is planning a triumphant entry into Tokyo Wan, mysterious orders directly from MacArthur himself shove Ingram into the center of a deadly vortex.

Author Jack Gobbell is painstaking in his effort to get his facts accurate. Good research is absolutely vital to developing an air of authenticity and believability to wrap around an historical novel. This attention to technical and historic detail is all too rare, even in today’s “Google Age.” Yet Gobbell gets it right. He deftly weaves a complex tale around Stalin’s last minute declaration of war against Japan and invasion of Karafuto, or Sakhalin to the Russians, as a stepping stone to Stalin’s plan to occupy northern Hokkaido. Mix in the discovery of the Kwantung Army’s Unit 731 and their horrific biological experiments; add MacArthur’s role in hiding the facts behind Unit 731 so the U.S. could use data from the experiments, and let simmer. Your stew is a fact-based account of a treacherous and little-known part of history.

Now, layer the storyline into this mix. Todd Ingram is unexpectedly dropped into a maelstrom. Having caught the attention of senior brass with his previous exploits, Ingram is ordered on a special mission to rescue an International Red Cross representative and evidence that he gathered about Unit 731. An unexpected hostile encounter with the invading Russian force sets the premise for much of the rest of the tale.

Character development is a challenge for any author, and even more so when some of your characters are well known historic figures. Appearances by Halsey, Spruance, McCain, Sutherland, and even Auturo Toscanini conform well with their real-life historic persona. But Gobbell really shines when he is building the characters for his key players. No cardboard figures or stilted conversations here. The characters are well-rounded, sympathetic, and believable people straight out of 1945. Many of the key figures have appeared in earlier stories. You don’t need to read the earlier ones to enjoy this one, but it helps in understanding some of the subtler motivations and interplay. I think that Gobbell’s rather frequent mention of previous encounters between the various protagonists was a clever marketing ploy to go buy his earlier works.

Edge of Valor is eminently readable and a fast-paced, fun story. The plot is complex enough to keep you on your toes as the story plays out. Just when you get complacent, Jack will throw in an unexpected plot twist. He will have you thumbing through your WW II history collection or doing a Google search for more information about some little known and long forgotten historic tidbit that he has woven into his tale. This story is recommended reading for an enjoyable evening or two with a log on the fire, your feet up, and a slow sipping drink.

Commander George Wallace is a retired submarine officer and the author of the submarine thrillers Hunter Killer, Firing Point, and Operation Golden Dawn.