A “flivver” is an American slang term used in the early twentieth century to refer to any small car that gave a rough ride. These “flivvers” were primarily small, inexpensive and old. In the context of the United States Navy, “flivvers” refer to the two specific classes of destroyers that entered service in the early part of the 20th Century. Destroyers evolved from the need to defend a battle fleet from the newly developed, high-speed torpedo boats. Vessels were developed into what became known as torpedo boat destroyers, which was later shortened to destroyers.

The earliest US Navy ships classified as destroyers were the thirteen ships of the Bainbridge (DD 1- DD 13) class and the three ships of the Truxtun (DD 14 – DD 16) class. Both of these classes were referred to as Torpedo Boat Destroyers. These ships entered service between 1902 and 1903. Twin reciprocating steam engines developing approximately 8000 SHP propelled these classes. They could reach 28 to 29.6 knots, a very respectable speed for the day. Steam was supplied at 250 psi from four coal fired water tube boilers. Their major armament consisted of 18” torpedo tubes and 3” guns, backed by 6 pounders. The torpedoes were looked upon as their “Main Battery.”

The term “Flivvers” also applied to the Smith (DD 17) and the follow on Paulding (DD 22) classes. The five ships of the Smith Class were authorized in 1906 and entered service between 1909 and 1910, while the 21 ships of the Paulding Class entered service between 1910 and 1912. Both classes served throughout World War I, but they had relatively short service lives. All of the “flivvers” were decommissioned by 1920.

The five ships of the Smith Class were:

Smith and Lamson were built at Cramp Shipbuilding, Philadelphia, Pennsylvania. Preston was built at New York Shipbuilding, Camden, New Jersey, and Flusser and Reid at Bath Iron Works. The ships all entered service in late 1909 with the exception of Lamson, which was commissioned in February 1910. All five ships served on the East Coast with their shared homeport of Charleston, South Carolina. During the period between 1917 and 1919, all were assigned to convoy escort and patrol duties out of Brest, France. All Smith and Paulding class ships were decommissioned in 1919 shortly after the end of the war. This is likely due to the excess of destroyers that remained at the end of the war and the many technical advances made in the newer ship classes during the war.

One peculiarity of the ships was the stack arrangement. They varied depending upon which shipyard the ships were built in. The two Cramp built boats (Smith and Lamson) had their two amidships funnels paired close together. The funnels on the New York boat (Preston) were equally spaced, and the Bath ships (Flusser and Reid) were in pairs fore and aft, as shown in the following photos. The funnels were raised in 1912, probably for the reasons shown in the photo of the USS Flusser underway.

These ships would not have much luck meeting modern emissions standards. Ships had an open conning station on top of the pilot house, where watch standers would have to put up with a lot of smoke and water spray. You would also have to keep the lower portholes closed at high speed, or the crew would get wet.

The steam turbine was invented in Great Britain by Charles Parsons in 1884. The first marine installation was aboard the SS Turbinia, which was launched in 1894. By the early 1900s, turbines could be found aboard several large passenger vessels including the liners Mauretania and Lusitania, which entered transatlantic service in 1907. Both of these ships had quadruple screws driven directly by very large steam turbines with a total rating of 68,000 SHP at 190 RPM. The HP turbine rotors were 10’ in diameter and the LP turbine rotors were over 15’ in diameter.

Several very significant technical obstacles had to be overcome in order to make steam turbines viable for marine applications. The first and most significant was that turbines operate most efficiently at high RPM, while propellers must operate at much lower speeds in order to avoid cavitation. A compromise between efficient turbine and propeller speeds was required. The approach was to add stages to the turbine in order to make it operate more slowly so it could be connected directly to the propeller shaft that operated at higher than desirable speeds with a subsequent loss in propeller efficiency.

Additionally the turbine rotor diameters had to be quite large in order to develop the torque necessary to turn the propeller shafts. On sea trials, USS Smith operated the engines at 724 RPM. The first geared turbine installation aboard a US Navy destroyer was USS Wadsworth (DD 60), which entered service in 1915. Another significant problem was that the early turbine installations were very inefficient at low speeds. A variety of different cruising arrangements, many of which were quite complex, could be found aboard the World War I-era naval vessels. Some destroyer classes had small reciprocating steam engines geared to the propeller shafts for use under cruising conditions.

The next illustration shows the then revolutionary triple screw Parsons Turbine propulsion system for Flusser under construction on the floor at Bath Iron Works. The three shaft lines can be clearly seen. The turbines were arranged in five separate casings. The center shaft was driven by the High Pressure Turbine. The two Cruising and Low Pressure Turbines drove the port & starboard outboard shafts. The Low Pressure turbines exhausted outboard through the big ducts that you see to the main condensers. There were separate stages in each Low Pressure Turbine to go astern. The engines were all located in a single engine room, which was fitted with a skylight. The center shaft could not be reversed. The BIW people were justifiably very proud of this installation. 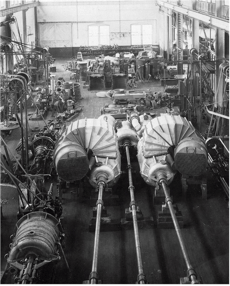 Saturated steam at approximately 240 psi was supplied to the turbines by four coal fired water tube boilers manufactured by C.D. Mosher, New York. The boilers were unusually designed. They had two steam drums, one on each side of the boiler. Each steam drum was connected to a separate water drum by means of its own generating bank consisting of 1” tubes. This appears to have been the only application of Mosher type boilers on U.S. Navy destroyers of that era. In those days, each boiler was located in its own fire room. Combustion air was provided by individual forced draft blowers that discharged directly into the fire rooms, which were maintained under a positive pressure when the boilers were steaming and had to be entered by way of an air lock.

The New York and Bath built ships had four stacks, while the Newport News, Quincy, and Cramp built ships had three, with the middle stack consisting of two uptakes trunked together. The newer class ships burned oil rather than coal and had 12,000 SHP vice the 10,000 SHP on the Smith Class, making them about one knot faster. Endurance was 3000 nm at 16 knots. There was some variation in the turbine arrangement between ships of the class. Most of the ships of the class had the same triple screw arrangement as the Smith class; however, five ships of the class had twin screws. DD 22-31 had Normand water tube boilers, while DD 32 through DD 42 had Normand boilers. Both of these boilers were of the “A” Type with a single steam drum and two water drums. All of the ships were decommissioned in 1919. However, twelve ships of the class were transferred to the Coast Guard for use in the Rum Patrol between 1924 and 1930. All ships of the class were scrapped in 1934-35 to comply with the London Naval Treaty. A photo of the Newport News built USS Terry (DD 25) underway follows. Note the three stack arrangement:

A few historical items of interest concerning the Smith and Paulding Class destroyers include:

In summary, despite their relatively short service life, the “Flivvers” represented definite technical advances and they played very significant roles in the early development of US Navy destroyers.