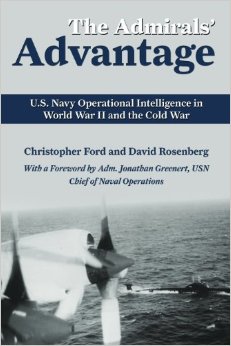 This paperback reissue is the outgrowth of a series of operational intelligence (OPINTEL) “Lessons Learned” studies by Office of Naval Intelligence (ONI) reserve units conducted between 1994 and 2004. It also includes as well as a 1998 symposium on the same topic. The book is really a summary report about these activities. It reads more like a report than a narrative history, as it focuses almost entirely on the chronological evolution of organizational structures and functional operations. Readers looking for a general history comprised of anecdotes, individual achievements, and loads of interesting episodes about intelligence derring-do (rare in the Navy anyway) will not find that here.

The authors could not produce a popular history because they faced two significant limitations. First, the work served as the official report of a multi-year project supervised by six flag-rank Directors of Naval Intelligence. Such documents are not written to entertain. Secondly, much of the material that the book covers remains classified. Despite these issues, Ford and Rosenberg, both former Naval Reserve intelligence officers, present a substantive and interesting assessment of OPINTEL’s history and evolution from World War II to the advent of post-Cold War conflicts involving non-state pluralistic adversaries. Not surprisingly, the text is dry, with implicit or unwritten detail only intelligence professionals and serious scholars with some background in the field will genuinely benefit from. For this relatively narrow audience, however, The Admirals’ Advantage certainly is worth a look.

OPINTEL is “the art of providing near-real-time information concerning the location, activity and likely intentions of potential adversaries.” It is “directly concerned with the operating forces,” and intended for their near-term use to plan and conduct operations. Naval intelligence as conceived today is a twentieth century development that followed the introduction of shipboard radio communications. The Royal Navy utilized radio intercepts in World War I to anticipate German ship and submarine activities. The U.S. Navy followed the British lead in the years leading up to World War II, with both services relying on far more sophisticated analytical techniques.

The best-known event of the war involving both intelligence gathering and code breaking was the Battle of Midway. American analysts were able to predict that the island was the target of a Japanese fleet action six months after Pearl Harbor. This enabled U.S. carriers to ambush the Japanese and sink four aircraft carriers at the cost of one U.S. deck. Midway, coupled with the American invasion and victory at Guadalcanal later in 1942, put Japan on the strategic defensive until VJ Day.

U.S. emphasis on the “location, activity and likely intentions” of the Imperial Japanese Navy and the Kriegsmarine established OPINTEL at the central function of naval intelligence. Despite post-war force reductions, the Cold War quickly revitalized and institutionalized this approach. Threats from the Soviet Union generated significant efforts in several phases of the rivalry. The Soviets focused early on sea denial, and new missile technology created urgent OPINTEL requirements contributing to fleet defense for forward-deployed U.S. battle groups that would support any potential combat in Western Europe. The stakes were raised exponentially once the Soviets acquired nuclear weapons. Nuclear-powered submarines with the capability to launch nuclear missiles while submerged and the added threat of a growing blue-water Soviet naval presence required an even higher level of intelligence activity.

The U.S. Navy’s continuous monitoring of Soviet nuclear ballistic missile subs (SSBNs) became the service’s top strategic priority throughout much of the Cold War. Developing an all-source intelligence network involving undersea acoustic arrays and sensors on American aircraft, ships, and submarines enabled the U.S. to meet and contain this threat until the collapse of the Soviet Union in 1991. This comprehensive methodology and the application of constantly improving, complex technological resources and well-trained personnel were instrumental in avoiding potential disaster. Intelligence and operational units worked as cohesive teams. The best evidence of the effectiveness of their partnerships, almost completely unknown and rarely acknowledged by most Americans, was the absence of deliberate or accidental incidents that could have led to war and destruction beyond comprehension.

The Navy’s unique approach to intelligence was so successful that other services have adopted and adapted it for their own uses and established joint OPINTEL activities that have added continuous value through the years of relative chaos that followed. Even though serious long-term threats to naval assets are unlikely at the moment, OPINTEL has refocused its strengths on the now prevalent multifarious adversaries that function in unexpected ways around the globe, proving the effectiveness of a concept that has been in place and steadily evolving and progressing for nearly 75 years.

Dr. Satterfield served as a naval reserve intelligence specialist and officer for more than 20 years.