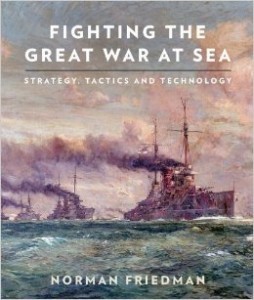 The centennial of World War I has renewed focus on the conflict, including a slew of new books about the war. Norman Friedman’s Fighting the War at Sea: Strategy, Tactics, and Technology, examines the naval aspects of World War I.

Friedman attacks his subject comprehensively. He opens by examining the maritime war on a strategic level, presenting the grand maritime objectives of Britain, Germany, and, to a lesser extent, France, and the resources possessed by the major participants. He then reviews the fleets and the operational strategy of Britain and Germany, concluding with an examination of the battles.

He discusses the nature of the ships involved, starting with capital ships and working to inshore vessels, submarines, and anti-submarine vessels. He also surveys weapons and technology of World War I’s navies, which includes a chapter on mine warfare.

Some might think there is little new to learn about the naval aspects of World War I. Friedman shows that new information has been released since the fiftieth anniversary of the conflict. A great deal of material was declassified 75 years after its end. Ironically, some of its secrets held value during the Cold War, which ended a few years before the seventy-fifth anniversary.

The book presents new information. The initial maritime inaction is explained. Both sides had solid reasons for their actions, although underlying assumptions may have been flawed. Both sides believed the war would be short. The Germans were bedeviled by shortages of spares, ammunition, and scouts. Germany was Britain’s biggest trading partner; the Admiralty initially wished to avoid economic total war.

The reason for the propensity for British battle cruisers to explode at Jutland is revealed. Friedman shows this was due less to design flaws than from some captains ignoring safety procedures to increase rates of fire. He also provides evidence of the inadequate horizontal protection explanation offered by Beatty and Jellicoe afterwards was an excuse, used to cover up these failings.

Shortcomings of anti-submarine warfare during the First World War are well known, but Friedman highlights the handicaps submarines worked under. Inadequate targeting systems limited salvoes to single torpedoes. The chances of one torpedo hitting were further handicapped by the lack of plotting computers or tools to accurately determine the course of a target.

Most of all, Friedman offers readers an appreciation of the importance of factors often ignored in naval histories or war games. Logistics, personnel, and non-combat technologies (such as wireless communications) often determined victory. Friedman highlights these aspects superbly.

The book suffers a bit from being too focused on the British and German navies. The French Navy is mentioned in passing, and the United States Navy’s contributions are covered adequately. Italian, Austro-Hungarian, and Russian navies are almost totally neglected. Admittedly these were sideshows.

Fighting the Great War at Sea is a book anyone interested in the maritime aspects of the war will want to read. It provides a fresh and informative study of a critical aspect of the war.