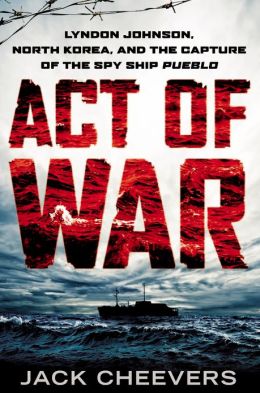 This excellent history, drawn from 11,000 pages of previously classified or unexamined documents as well as memoirs and other more contemporaneous accounts, is an omnibus review of the 1968 Pueblo incident.

This volume is the culmination of more than a decade of research by a former Los Angeles Times political reporter using much material unavailable to earlier works on the affair published soon after its conclusion. It summarizes the facts of the case and incorporates many more peripheral but significant activities gleaned from other sources that shaped the outcome and implications of the ship’s seizure. Other essential books that cover various aspects of the story are Ed Brandt’s The Last Voyage of USS Pueblo (1969), the captain’s account, Bucher: My Story (1970), Trevor Armbrister’s A Matter of Accountability (1970), and Mitchell Lerner’s The Pueblo Incident (2002). Cheevers includes these findings and adds many new insights from his relentless digging.

Cheevers’s analysis shows that nearly everyone involved, up to the highest levels of U.S. military and intelligence command, acted inadequately, with little planning for contingencies. This conclusion is no real surprise, but Cheever discloses extensive background on the military activity immediately after the ship’s capture and the months of diplomatic maneuvering that reinforce his overarching judgment. Early on, the Navy took a page from Stephen Decatur and considered sending a destroyer with carrier air cover into Wonson Harbor to recapture Pueblo and a Marine raid onshore to rescue the crew. It was clearly a hare-brained scheme destined to fail if actually carried out.

Intelligence capabilities are far more sophisticated today. Vessels like Pueblo, operating just outside territorial waters, are long since obsolete. At the time, however, coastal surveillance conducted by ships or aircraft were a necessary part of intelligence gathering. High-altitude reconnaissance aircraft, like the A-12 and SR-71, capable of Mach 2 and Mach 3 airspeeds, respectively, were too few in number and in too high demand to cover North Korea, not considered a global threat back then. Still, command authority ignored the real risk attached to Pueblo’s mission despite repeated Soviet attacks on U.S. snooper flights close to USSR territory near the Sea of Japan. The U.S. apparently also underestimated North Korea’s capacity for outrageous actions, even after several terrorist raids against South Korea and the attempted assassination of the South’s president just days before Pueblo’s hijacking.

The overriding aspect of the incident, so resonant in memory, was the fact that Pueblo surrendered without firing a shot, making it the first U.S. Navy ship to be taken by a foreign power in peacetime since the capture of USS Chesapeake in 1807.

Moreover, Pueblo was no ordinary ship. It carried a vast inventory of classified papers, studies, codebooks, and surveillance equipment. The NSA later described these as the worst security breach in U.S. history. Because he failed to fight his ship, the captain, CDR Lloyd “Pete” Bucher, faced a court of inquiry and a court martial recommendation, which was quickly squelched by the Secretary of the Navy. Cheever argues forcefully, however, that the Navy placed Bucher and his crew in an untenable situation with no options if anything went wrong. To back up his claim, Cheevers found the only surviving copy of a White House study headed by former Undersecretary of State George Ball which found fault with the “planning, organization, and direction” of the entire operation by command authority.

The Pueblo crew’s courage was never in doubt, despite nearly a year of horrendous and continued abuse, torture, and starvation. They all signed confessions. Anyone subjected to such treatment would. To their credit, the 82 sailors consistently resisted their captors, most famously displaying middle fingers, explained as “Hawaiian good luck signs,” in many North Korean publicity photos and acted with deliberate insubordination that could have led to their executions.

Pueblo itself reflected the Navy’s shoestring level of support for activities unrelated to the Vietnam War. The ship was a small World War II-era Army freighter converted into an electronic and signals intelligence gathering vessel. Despite entreaties from Bucher, document destruction systems could not handle the volume of classified documents in an emergency, and the crew was inexperienced or inadequately trained. Pueblo was effectively defenseless; except for small arms, its only crew-served weapons were two .50-caliber machine guns, useless against the guns, cannons and torpedoes on the North Korean sub chaser and patrol boats that waylaid AGER-2, not to mention MiG fighters carrying missiles. Armament was absent because the Navy thought it might provoke a response. Bucher had clear responsibility to resist seizure, but doing so would have killed many if not all of those on board, in addition to the one sailor killed by cannon fire that forced Bucher to heave to. Even if the ship were sunk, North Korea could recover much of Pueblo’s classified information and equipment because sea depth was just 30 fathoms.

Pueblo’s seizure led to calls for retaliation nationwide, but President Lyndon B. Johnson had few real options for action. Within days, the Tet Offensive would disrupt the Vietnam War, shredding public support for the conflict and forcing Johnson’s withdrawal from the 1968 presidential election. Johnson quickly implemented diplomatic actions that kept the lid on South Korea, incensed by the North’s assassination attempt, and led to the crew’s release, two days before Christmas in 1968. American negotiators finally broke the impasse by agreeing to an apology that the U.S. renounced before signing it, a process Cheever documents in detail from contemporary memos and personal accounts.

Bucher and his crew returned to the U.S. as heroes, but the incident scarred many of them. Bucher, with no prospect of promotion, retired in 1973. He died in 2004 at the age of 76. Most of his shipmates left the service, many with crippling health issues after their time in captivity. North Korea today displays Pueblo as a Cold War trophy on the Taedong River in Pyongyang. The little ship remains in naval service, the second-oldest commissioned vessel in the U.S. Navy after USS Constitution, and will remain so until it is returned.

Dr. Satterfield teaches military history and served as a naval intelligence officer. Unfortunately, he is old enough vividly to remember the Pueblo incident.