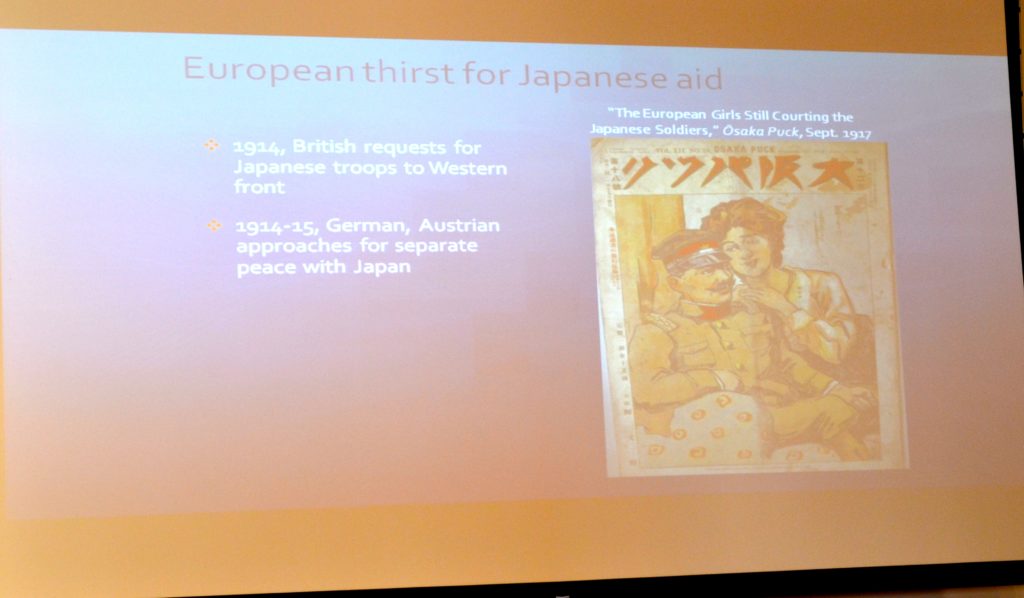 A packed crowd huddled into the MacArthur Memorial Theater in Norfolk, VA yesterday to listen to several well-known authors and historians speak on various topics surrounding the First World War. The Memorial graciously hosted the World War I Centennial Symposium (2014-2018) in partnership with Old Dominion University, the MacArthur Memorial Foundation, the Hampton Roads Naval Museum, and Southern Bank. The Naval Historical Foundation also partnered in the event at a private function held for the Conference speakers on the 13th of November. As an official conference partner, I was delighted to go back to my old stomping grounds in downtown Norfolk to see old friends and colleagues and learn more about the Great War. Adding to the event’s own celebrity status, C-Span was on hand to televise each of the speakers throughout the two-day event.

Coming into the day, I had two simple questions that I hoped would be answered. For any student of history and memory, they are generally the ONLY questions you want to hear:

My own knowledge of World War I is rather limited. As an American navalist, there are a select few instances where the United States Navy clearly shines within the grand war historiography. For others like myself, the United States Navy wins a grand victory against Spain in 1898 and skips directly to the Washington Conference in 1921-1922. There simply isn’t much to talk about in between. With that in mind, I kept an open attitude to the presentations and dove in headfirst. 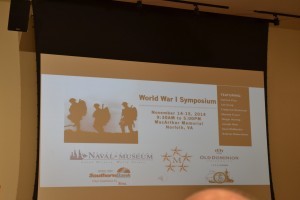 After a few presentations, I realized that I could answer my own questions. What do we remember about the war? We remember only those simple facts that help us frame a timeline of events. For me, that was easiest. Although this can go for any war or series of events, it seems more likely with World War I. We know there was an assassination, then alliances and conflict. This ultimately leads to a stalemate that lasts until 1918. In between, there is death. Unless you are a specialist on the subject, such grand synthesis of those facts seems impossible. It is simpler to use that “skeletal” model of the war to get to the Paris Peace Accords. Do not pass go. Do not collect $200 dollars. Thankfully, each of the four speakers today took those simple concepts and gave it a body to work with.

I wanted to remember more about the war itself. Any aspect. Every aspect. It was not about the navies alone anymore. As the day progressed, my own thoughts about the war grew both conflicted and complicated. The simple war that began with tangled alliances slowly became a complicated web of political misgivings and shortcomings, military strategy, and bitter, unprovoked rivalries.

Serious and thoughtful conversation occurred. The audience was as good at asking questions as the presenters were answering them. It was wonderful and refreshing for a long-time historical conference attendee. If anything, I silently wished this type of discourse would “break the Internet” with its might of wisdom. But alas, the Internet stayed intact, celebrity debutantes still have the spotlight, and World War I remains on the chopping block. History is indeed the well we come to draw from in our time of need. We were all thirsty today. Thankfully, the four presenters offered plenty of historical knowledge and insight to quench each attendee’s thirst. 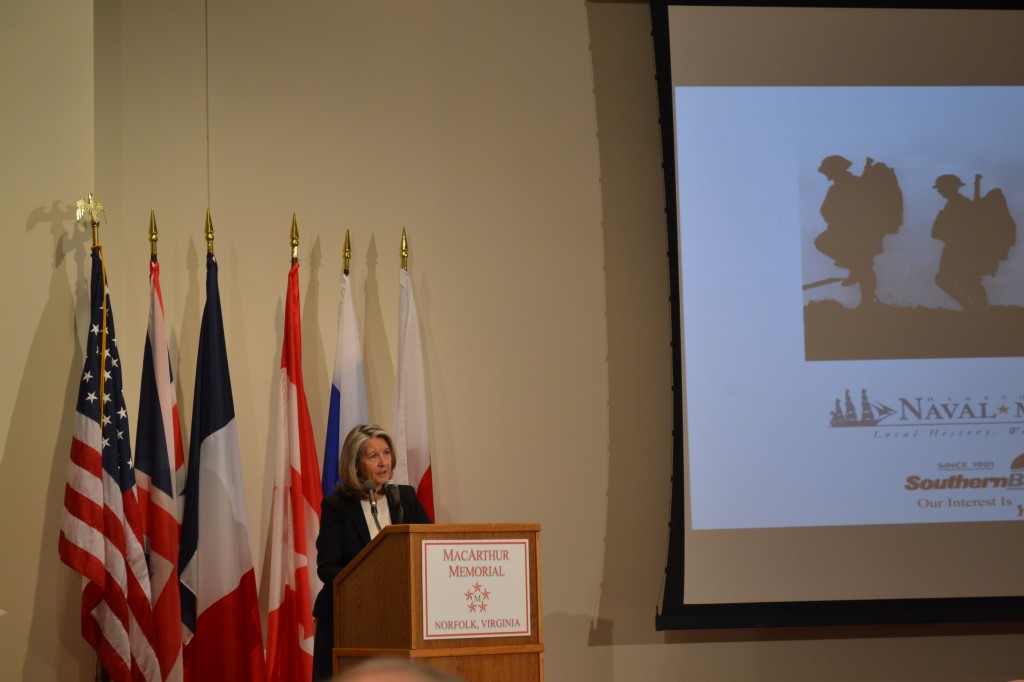 Noted author and BBC producer Catrine Clay gave a wonderful talk about the complicated relationship between the three royal cousins (Russia, Germany, England), arguing how that peculiar dynamic “led to the labyrinth of the First World War.” Ms. Clay admitted that her subject was but “a small strand in an incredibly large story.” That being said, her presentation gave rich detail into the lives of the three rulers, particularly Czar Nicholas II of Russia and Kaiser Wilhelm of Germany. 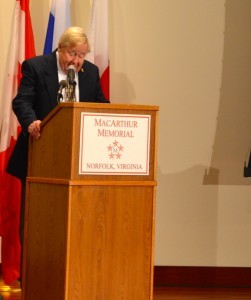 Dr. Holger Herwig, The Battle of the Marne 1914: One Hundred Years Later

It was almost as if she knew each of them personally. Ms. Clay went in depth into their personal lives and their reasons behind WHY they did what they did once war seemed imminent in 1914. If anything, her subject matter would make for a compelling Hollywood drama. Given her background, there is a strong possibility!

Dr. Holger Herwig’s presentation on the Battle of the Marne was deeply compelling and fact-filled. Dr. Herwig argued that the Marne was the “most decisive battle of the war.” His discussion centered around the horrific beginnings to the war and the realizations and pitfalls of Germany’s Schlieffen Plan. For Herwig, the Marne set about the military and political precedent for the middle of the twentieth century. “Without the Marne,” he said, “there would be no Hitler.” Perhaps he is right.

Dr. Sean McMeekin treated us with a well-rounded and compelling discussion on the origins of the war itself. Lecturing attendees with full attention, McMeekin argued that the war itself was an “avoidable catastrophe.” Using the simple recall of facts and incidences (again going back to the skeleton argument), he builds his body around the inevitability of war between countries like Greece and the Ottoman Empire, not England and Germany. He thankfully mentioned the tripartite naval race in the Mediterranean between Greece, Russia, and the Ottoman Empire, and how that itself helped shape the gravity of conflict in Sarajevo on a warm summer morning in 1914. Unfortunately, through a laundry list of circumstances, the “political striptease” between the great nations ultimately ended in total mobilization.

Dr. Sean McMeekin, The War of 1914: An Avoidable Catastrophe

The last speaker, Dr. Frederick Dickinson, discussed the role of Japan in the First World War and the early twentieth century world stage. His goal was to answer the question: “Why should we be worried about Asia at this conference?” Thankfully, he answered in kind. Likening the conflict in the Balkans with the Ottoman Empire to China in Asia, Dickinson masterfully followed the story behind the meteoric rise of Imperial Japan from nineteenth century agrarian hamlet to twentieth century industrial powerhouse and global threat. His talk was a careful reminder that the First World War was a WORLD WAR, not just a European conflict. 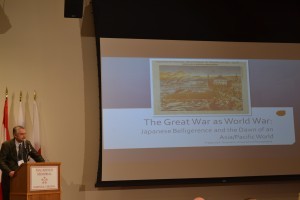 Dr. Frederick Dickinson, The Great War as World War: Japanese Belligerence and the Dawn of an Asia/Pacific World

My brain swam with new facts and information when I left the building. How to process it all?

Had my opinions on the war changed or stayed the same? This was, after all, a highly publicized conference with some of the world’s foremost authorities on the war. With so much information projected to attendees (and so little involving the United States Navy), I struggled to find a happy medium for a conclusive answer. For inspiration, I put on Beethoven’s String Quarter No. 14 (C Sharp Minor), by far the saddest and most heartbreaking of all classical compositions, and began to think. If anything, the sad and eerie strum of violins would put me in a mood to contemplate the war itself.

Trench warfare. Sweeping land offensives with mass casualties. Political rivalries. The U.S. Navy? How does it all fit? Could it fit?

Then it came to me. Henry Reuterdahl.

In 1917, American import artist Henry Reuterdahl began painting a series of propaganda posters to support the U.S. war effort. One of his more famous pieces was 1917’s “All Together – Enlist in the Navy.” In the painting, sailors are happily standing in line as allies. Representatives from Japan, France, United States, Britain, Russia, and Italy are sharing a camaraderie and esprit de corps only long-held friends would share. Politically, it is a rousing call for Allied intervention against the Central Powers. Of course, Henry Reuterdahl would have no recollection of the political chess match that occurred in the early part of the century which ultimately led those countries to bond together as allies. Thankfully for us, hindsight has a going rate of 20/20. 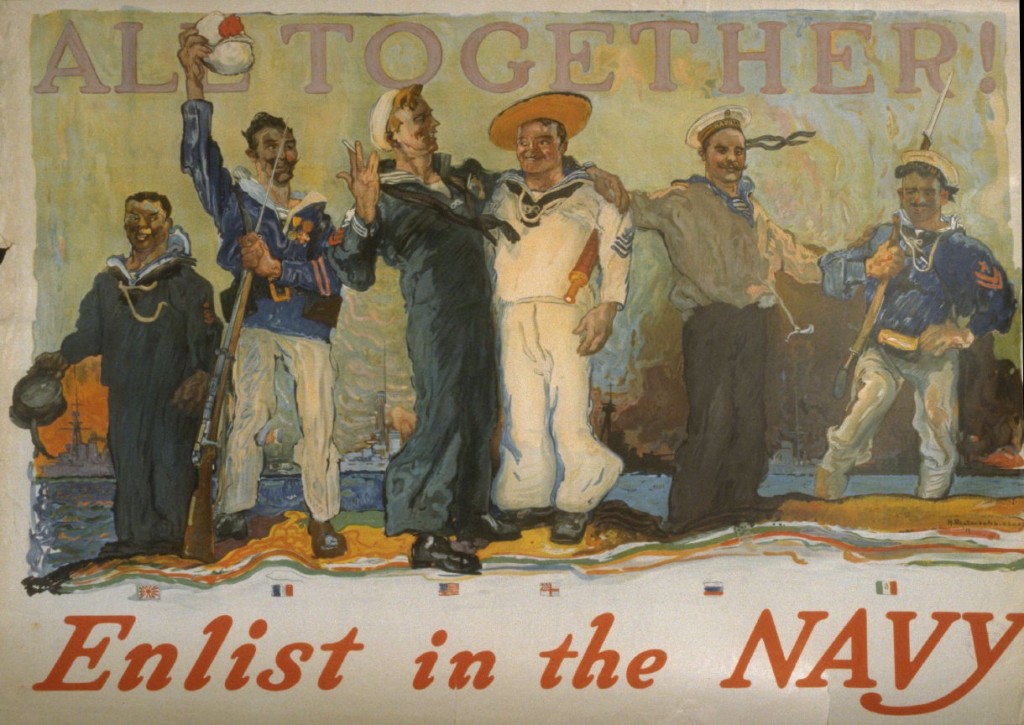 All Together! Enlist in the Navy, By Henry Reuterdahl

Looking at the painting, I am struck by its diversity and message. Each of the authors would have something different to say about the image.

After listening to Dr. McMeekin, I began to ponder if it all could have been avoided? That answer becomes even harder to answer when placed in context to Catrine Clay’s presentation on the tenuous and ultimately tragic relationship between the three royal cousins. Would that wonderful work of art above even be necessary in a world where Dr. McMeekin is right? Dr. Dickinson’s lecture gives the inclusion of Japan in the image a very new and interesting meaning. Why is their position small and in the background? What about the love affair between Russia and England? Should they be the ones clasping arms in the middle of the painting? Are they smiling because they are sailors, far removed from the hell witnessed at battles like the Marne? I began to thirst for more answers again, even if it could be found in a nearly century old painting.

Tomorrow is the second day of the conference. I plan to bring a glass of water.