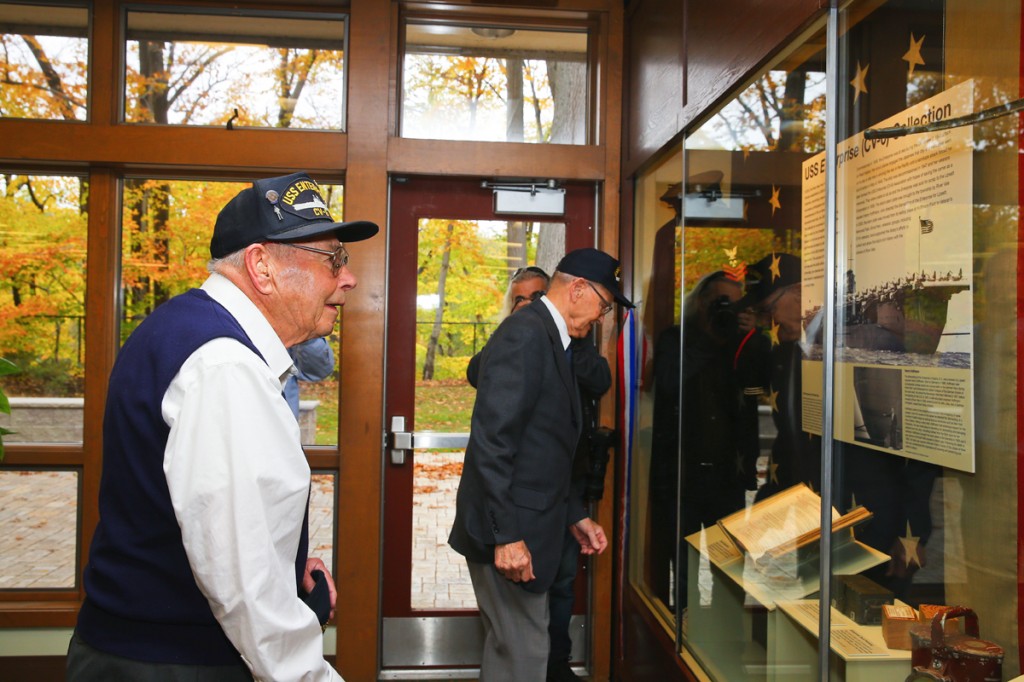 Every now and again, we have an opportunity to reflect for a moment on the heritage of those who have gone before us.  Veterans Day is one such opportunity.  The day originally known as “Armistice Day,” was a celebration of the end of “The Great War,” and it is now celebrated as a day to honor all of America’s veterans.  But last weekend another such opportunity presented itself that you may not have heard of: on 1 November, the town of River Vale, New Jersey, honored the veterans of USS Enterprise (CV-6) by the dedication of an exhibit of artifacts from the famous World War II flat top.  Many questions enter the mind … “River Vale?  Where is River Vale?” and perhaps most importantly, “Why River Vale?” All great questions, but first, a brief digression:

The USS Enterprise is legendary.  All 8 of them — there has always been an Enterprise in the United States Navy.  For that matter, there was an Enterprise even before there was a United States of America, dating to May of 1775 when a ragtag band of Sailors captured a British 70-ton sloop of war and gave her the now-famous moniker.  Subsequent US Navy ships to bear the name Enterprise included a schooner; several sailing vessels; a motorboat; the World War II aircraft carrier (the first to bear the title of “The Big E”); the first nuclear-powered aircraft carrier, CVN-65; and eventually, the third Gerald Ford-class aircraft carrier, CVN-80, which will enter service in the 2020s. 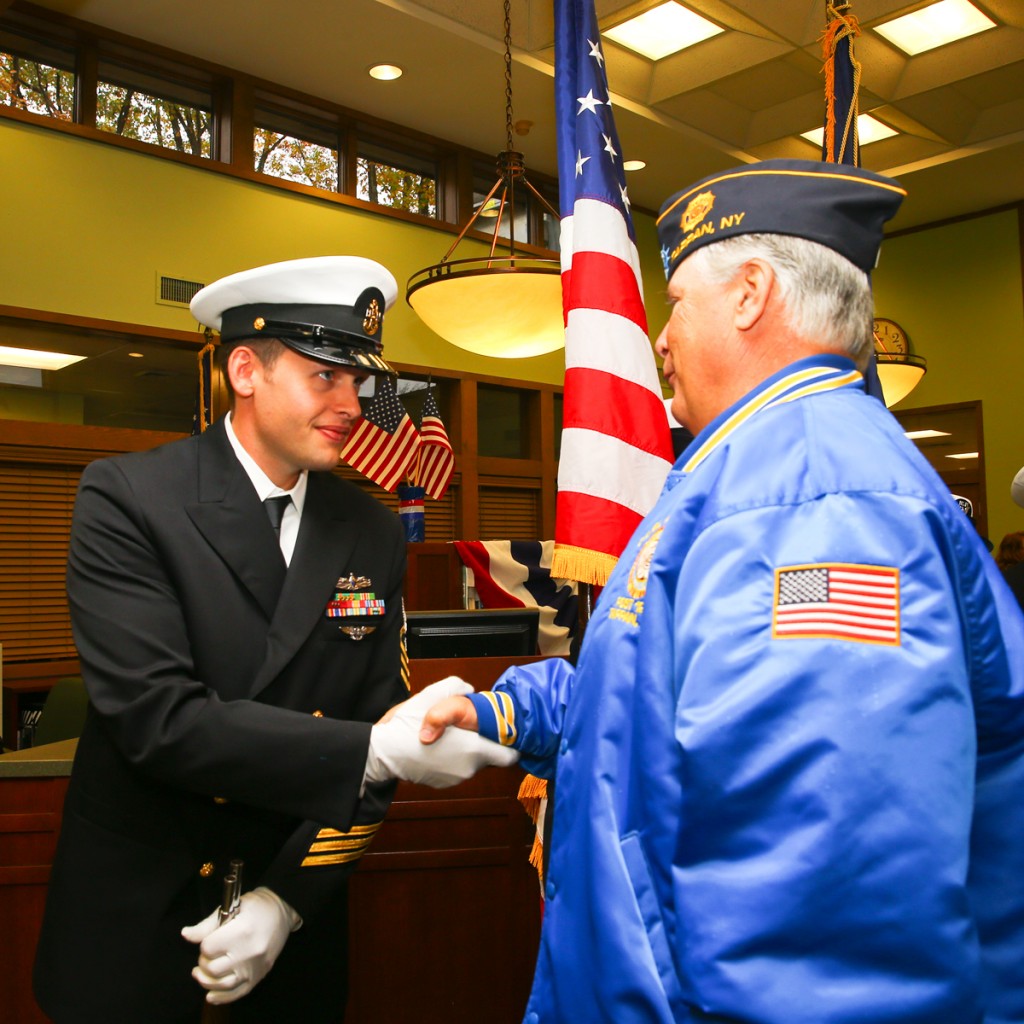 Which brings us back to the tiny town of River Vale, NJ.

In the drawdown following World War II, the US Navy was rapidly decommissioning ships, and not even CV-6 was spared from the cutter’s torch in the Brooklyn Navy Yard in New York.  The man charged with recycling the Big E was River Vale resident, Henry Hoffman, a German immigrant who knew that the ship he was about to disassemble earned twenty battle stars and distinction as the most decorated ship of World War II.  He may not have known it, but it would not have surprised Hoffman that Enterprise Sailors loved their ship — she had taken them to war, and delivered them safely home.  So attached were they that Enterprise’s Sailors sometimes even got into fights with Sailors from USS Essex (CV 9) while on liberty over whose ship could claim the title “Big E.”  Enterprise won that argument. 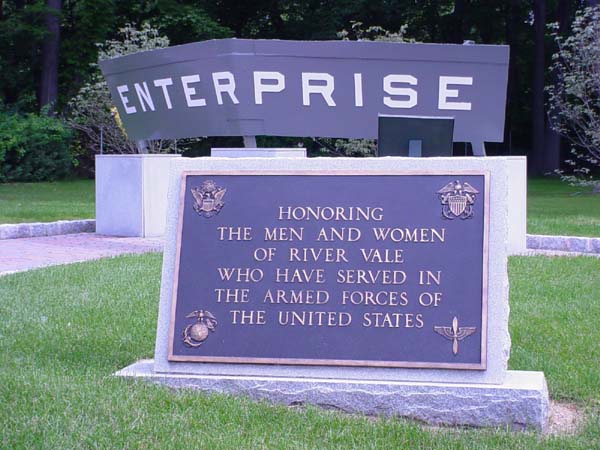 This was the ship Henry Hoffman was charged to dispose of, but he understood her importance.

So, he dutifully disassembled Enterprise, save for one priceless artifact, her stern plate.  He brought it to his sleepy home town of River Vale, NJ, where, to this day, it is on display in Veterans Park, a constant reminder of her legacy for all to see.  This town is now forever linked with the Enterprise legacy. 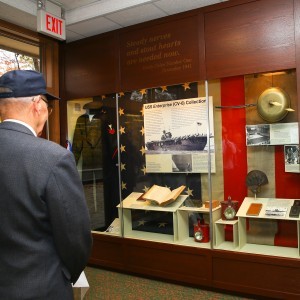 Working with the Enterprise (CV-6) Association, the River Vale Free Public Library raised enough money to construct the River Vale Free Public Library’s Enterprise Collection, donated by her veterans, to honor CV-6 and her Sailors.  It includes a Sailor’s uniform, ship’s bell, and a 12×18′ flag which flew over the Big E, among other treasures.  The dedication occurred on 1 November, and as an Enterprise veteran, I made the trek from Washington, DC, to River Vale for the ceremony.   The day included speeches by luminaries from far and wide: from local town councilmen, to state representatives and Congressmen, and a US Navy Admiral – all came to pay tribute to the Big E.

Perhaps the most important luminaries, however, were several generations of Sailors, old and young, who had (and still have) the honor of calling themselves an “Enterprise Sailor.”   Three veterans of CV-6 (including one who served on Enterprise from the first day of World War II until the last) attended, several retired CVAN/CVN-65 Sailors attended (including men who survived the tragic fire on her flight deck in 1969), and several current CVN-65 Sailors even attended.  In that room were Enterprise veterans from almost every decade of the 20th century, and all of the 21st – collectively they represented almost one hundred years of Enterprise history, and even though most had never met each other until that day, they shared a common bond:  The Big E.

Thanks are most certainly due to the town of River Vale, New Jersey, and in particular, the library’s director, Ms. Ann McCarthy, for keeping the legacy of Enterprise alive.  It is her personal dedication, River Vale’s support, and the patriotism of these amazing Americans that today and every day, we fulfill the mandate President Eisenhower declared in 1954 when he proclaimed the Veterans Day holiday:

“…let us solemnly remember the sacrifices of all those who fought so valiantly, on the seas, in the air, and on foreign shores, to preserve our heritage of freedom, and let us reconsecrate ourselves to the task of promoting an enduring peace so that their efforts shall not have been in vain.” 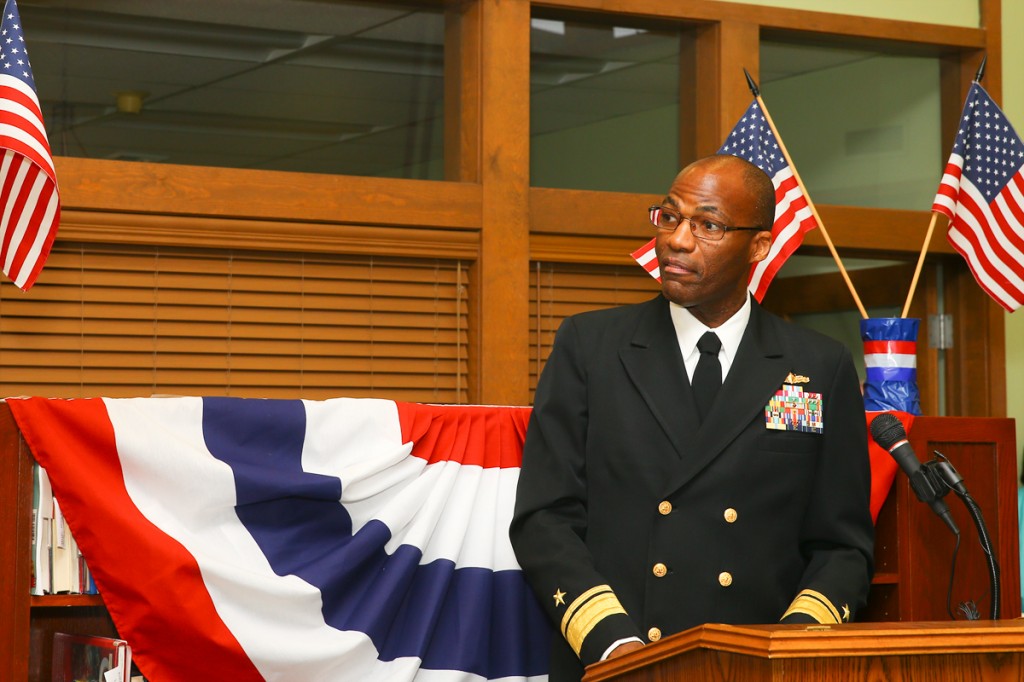 CDR Jason Grower is a Naval Historical Foundation Member who works as the Special Assistant to the Chief of Naval Operations at OPNAV (N00Z).