Thanksgiving. The unofficial start of the holiday season.

It’s that magical time of the year when friends and families come together to share stories and a wonderful meal. It’s a time to kick back and relax.

…For some. Others do not have that luxury. Not everyone gets to go home for Thanksgiving.

Throughout the history of the United States Navy, ships have served countless Thanksgiving and holiday meals to their hungry sailors. The tradition is nearly as old as the holiday itself.

The promise of turkey and stuffing to sailors certainly puts the doldrums of midrats into perspective. The Thanksgiving meal was no doubt one of the best meals of the year for sailors, only rivaled by Christmas dinner or beer days/steel beach barbecues.

As someone who is keenly interested in the cultural story of the men and women of the United States Navy, these menus fascinate me. I wrote a story last year about a private collection of Navy Thanksgiving menus from a former NHHC staff member. I wanted to know more. I wanted to dig a little deeper than merely showing the various ship menus over the past century. Why not analyze them?

I wanted to know exactly WHAT sailors were eating for Thanksgiving. Had the menu items changed or stayed the same? Were there any interesting items we might raise our nose to today?

I analyzed one Thanksgiving Menu for each decade of the first half of the twentieth century (1900s-1950s). Every menu item was written down and organized by course (Soup, Main, Sides, Dessert, etc.). All menus came from the Navy Department Library’s online collection. The following ship menus were analyzed: 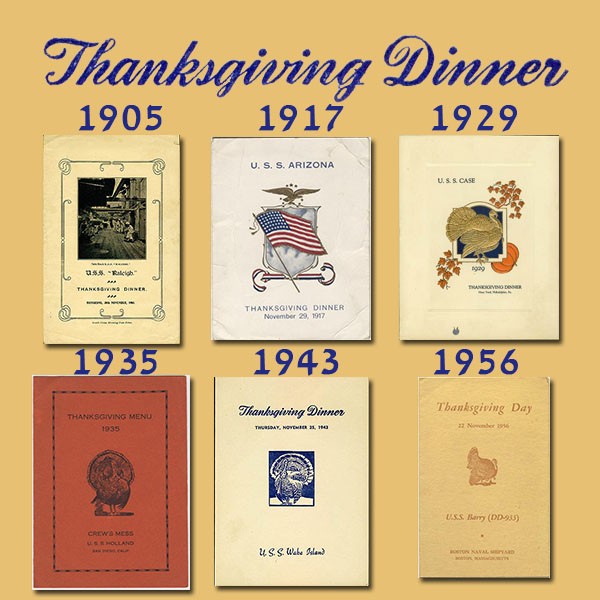 Six menus spanning over five decades worth of cultural and culinary history drew out a wealth of information. From the data gathered in the menus, some generalizations can be made. Here are some of the general takeaways from the analysis: 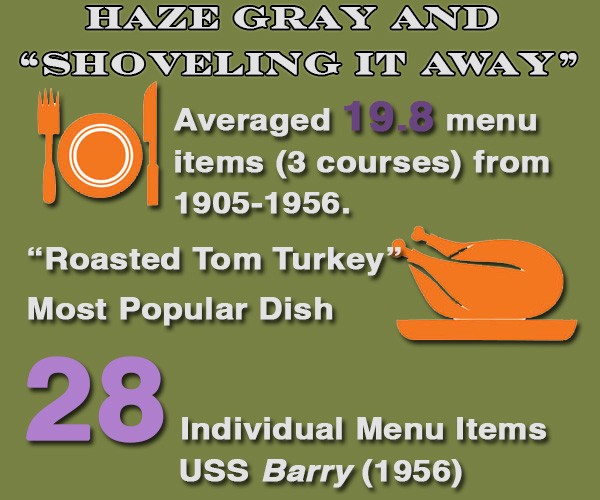 The soup portion of the Thanksgiving meal was by far the most diverse and assorted. No soup appeared on our list more than once.

More regularity came with the appetizers and starters. There appeared to be some strange fascination with the inclusion of celery on the menus. In fact, some type of celery dish (plain celery, stuffed celery, celery soup) appeared on nearly every menu. Although there were several variations, celery seemed to be a popular starter. I was intrigued by USS Case’s “fancy celery” menu item. What made it so fancy? Sweet pickles (or pickled relish) and Tomato Juice were also popular starters in the 1920s and 1930s.

Salads as starters  or individual courses were only included in a few of the menus, the oddest of which was “mayonnaise” (see below).

Turkey was always on the menu. In some cases (1917 and 1943), chefs also prepared a Smithfield Ham to go along with the “Roasted Tom Turkey.” As far as the dressing (stuffing) was concerned, the most popular menu item to serve with the turkey was an “oyster dressing.” Although some may turn our nose up to it today, oyster dressing is still served traditionally with turkey around the country. Most turkeys were doused in either Giblet Gravy, oyster dressing, or caper sauce. In fact, every Thanksgiving menu had some sort of oyster-based item on it. These men lived and worked on the water, after all – why not include a little seafood?

Over the course of 50+ years, sides remained relatively similar. Staples like cranberry sauce, mashed potatoes, sweet potatoes, and green beans are on most menus. What is interesting is the tendency for the chefs to cook a “creamed” version of every type of vegetable. It’s like a buffet in Vegas – creamed everything. Creamed corn. Creamed potatoes. Creamed carrots and peas. Even creamed cauliflower is on USS Holland’s menu in 1935. It’s all there. At least they began to incorporate warm Parkerhouse rolls into the mix beginning in the 1940s.

The desserts are the least exciting of menu items. The typical fruit and pies are all there. A dessert called “mince pies” appears in the early twentieth century menus. Mince pies, a British-inspired sweet fruit pie, are traditionally served during the holiday season. It only seems fitting.

Most sailors were served coffee, cigars, and cigarettes during the dessert course. This was certainly a different time and a different kind of Navy.

and now to the unpleasant business of the mayonnaise salad. They say that the sun never sets on the British Empire. They also say that mayonnaise should never be the principle ingredient in salad.

Of all the menu items analyzed from Thanksgiving menus spanning the course of half a century, the addition of mayonnaise salad to USS Arizona’s 1917 Thanksgiving menu is by far the strangest.

“Mayonnaise salad” is the menu item that we can only whisper about nowadays; its oil-based memory ushered in soft tones in the empty corners of our mind. This is one recipe Ms. Crocker would not want you to see.

Digging through some old cookbooks mid-century cookbooks and outdated recipes stored in the vaults of the Internet, it seems that the original concept of a mayo-based salad dates back to the late 19th and early 20th centuries. Lettuce was mixed with mayonnaise (2 cups for every head of lettuce), and then sprinkled with sugar and tossed on top of cold vegetables. As the century progressed, the concept of mayonnaise salad included in Arizona’s Thanksgiving menu morphed into the “layered mayonnaise salad,” or “seven layer salad.” In this case, the mayo-sugar mix is placed on top of several layers of vegetables and cheese in a trifle dish. If one deduces correctly, the seven-layer salad is in fact the predecessor to the seven layer dip, no doubt a staple appetizer at tailgates, dinner parties, and office get-togethers the world over. For that, we must give thanks to trendsetters like USS Arizona.

What is the Foundation thankful for? To put it bluntly: YOU. Your support keeps us going full speed ahead. Most importantly, we are also thankful for all of our men and women in the United States Armed Forces who CANNOT come together with their families during the holiday season.

A special thanks to the Navy Department Library for providing the Thanksgiving Menus online. Have a safe and happy Thanksgiving!