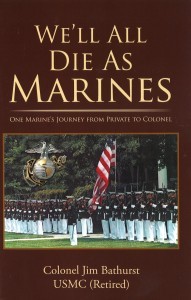 This is a very engaging autobiography of one Marine’s career worth reading by fellow Marines as well as anyone interested in recent Marine Corps history. The book covers the period from his enlistment in 1958 after dropping out of High School through 1993 when he retired with the rank of Colonel. But this is more than a short history of the Marine Corps. Bathurst’s intended to share his experiences in learning the value of leadership and the rewards of being a leader of Marines. Although some of his methods of leadership were unique to leading Marines, the importance of quality leadership to the success of an organization applies to any group or business. He points out some of the great leaders he worked with and for while also identifying several examples of poor leadership and their adverse impact. He also suggests that the demands of providing good leadership may come with both personal and professional challenges.

Bathurst entered the Marines as a troubled High School dropout who learned to thrive under the quality leadership of his NCOs. Throughout the rest of his career, he focused on developing and empowering NCO leadership as the key to organizational success. His career followed a unique path that provides insight into some specialized organizations in the Corps. His early experience as a junior Marine at Marine Barracks, Yokosuka, Japan was a turning point for him in learning discipline and the rewards of applying himself to being the best he could be. His involvement as a Drill Instructor (DI) and his experiences with recruits at Parris Island and later at Officer Candidate School in Quantico provided a unique perspective for anyone who has gone through either program.

During his service in Vietnam, he started as a Sergeant. He was quickly moved up to positions of leadership in his infantry unit, often serving as the Platoon Commander, an officer’s billet. His stories from Vietnam are alone worth reading. He was later promoted to Staff Sergeant and was nominated for promotion to both Gunnery Sergeant (GySgt) and 2nd Lieutenant (2nd Lt).

His meritorious promotion to GySgt came through just as he reported to the Washington Marine Barracks at 8th & I. He soon learned that his promotion to 2ndLt was also approved, so he ended up taking over the Special Ceremonial Platoon, which included the Silent Drill Team, body bearer section and the color guard section. Seeing the “inside” of 8th & I is revealing to those who haven’t served there, and he includes some interesting stories of guarding Camp David for President Johnson. The 8th & I became his own personal Basic School in learning to be an Officer of Marines through the leadership of the other officers there.

During a joint training assignment at Fort Bragg, he was grateful for the special mentorship of an Army officer who ensured he started his college education. He served in numerous infantry officer positions, including Battalion and Regimental Command. One unique assignment was as the OIC of a Marine Barracks that was having difficulties. He was able to turn it around to be recognized as the Outstanding Marine Barracks of the Year. He also commanded the Recruit Station in Chicago, a very different type of command focused on “selling” the Marine Corps.

He dealt with a variety of leadership challenges with each of his assignments. “Sometimes you have to force a Marine to be successful,” he said. The other quote used for the title of the book actually came from his Recruiting Command Sergeant Major, “We’ll all die as Marines,” which alludes to the Marine custom of, “Once a Marine, always a Marine.”

He mentioned the outstanding leaders he worked with. He noted some weak leaders who mostly go unnamed. Toward the end of his career, he was in charge of Landing Force Training Command, Atlantic (LFTCLant) and led the introduction of riverine craft in the Marine Corps. His final position was as CO of the School of Infantry at Camp Lejeune. During this period, he faced both political and personal opposition from some other senior officers for often petty and unprofessional issues. He doesn’t hesitate to identify them by name, which is somewhat exceptional for a book of this nature.

This book was interesting for me. This autobiography is slightly odd in that he never mentions his family life other than his parents and brother until the end. Only then does he reveal the cost of his style of leadership that resulted in two divorces and three marriages. The book does not have footnotes or references, though it does have a nice Appendix and Glossary of Marine Corps terminology and abbreviations. Overall, a worthwhile read.