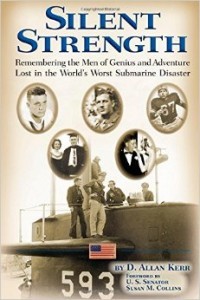 Silent Strength: Remembering the Men of Genius and Adventure Lost in the World’s Worst Submarine Disaster can best be summed up using the title of one of its own chapters – “One Disaster, 129 Stories.” Silent Strength is the story of USS Thresher (SSN 593) and her loss on 10 April 1963. It also is the story of some of the 129 men lost aboard Thresher that day, as well as the story of their parents, siblings, wives and children, and the impact of their sudden passing on their families and the wider community. As the book noted, “almost everyone knew someone touched by the tragedy.”

The book is a compilation of articles published in 2013 during the 50th anniversary of Thresher‘s loss. The articles were published by the Seacoast Online and the Portsmouth (NH) Herald. The book represents a great opportunity to present these stories again, hopefully to a wider audience.

Silent Strength does a great job of interspersing the stories of Thresher‘s officers and crew with other aspects of the disaster, including Thresher‘s World War II namesake, the attempts to locate Thresher‘s wreckage, and even the impact Thresher‘s loss had on submarine design and maintenance.

Although short (124 pages), Silent Strength is notable as a companion to the other works about the disaster which are generally more focused on the technological side of the accident. Silent Strength especially complements the Navy’s official memorial book published in 1964. As the author notes, “Unfortunately, it would take an entire series of volumes to appropriately recognize each Thresher hero.”

Greg Stitz works at the Maritime Administration in Washington, DC.