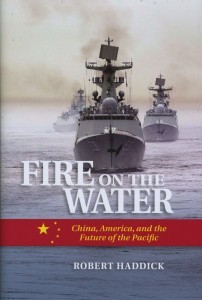 This book is one of several (including the essay collection Rebalancing U.S. Forces) books published this year by the Naval Institute Press that encourages a greater awareness, interest, and focus on the serious strategic problems China presents to the security and well being of the United States and its treaty and informal partners in the Asia-Pacific region. Fire on the Water provides the extended argument for a coherent strategy in dealing with the rise of China. The author seeks to deter Chinese aggression against the United States or its allies through strength while providing incentives for China to cooperate in peaceful global trade. This in turn provides heavy potential costs if they choose to behave aggressively in pursuing territorial claims against Taiwan, Vietnam, the Philippines, Japan, and other neighbors through its “sliced salami” policy.

Fire On the Water is systematically organized and thorough. The author shows the hallmarks of a strategic thinker aware of the gravity of the task at hand. He is concerned to make the strongest possible case for a solution to a serious problem requiring massive effort and considerable change. Readers will see how strategic reasoning is used a full rhetorical appeal to commit a realistic view of a serious threat, as well as the plan of combat it.

Despite the effort, Fire On The Water has some major difficulties. Specifically, problems arise in regard to the change in thought and behavior on the part of the American populace and political/military leadership and their behavior towards China and our allies in the Asia-Pacific region. Haddick argues that China will be a military threat in the moderate term by the end of the decade, in some respects to scare people into taking action. These are actions that he wishes others to take. They also include inspiring Americans to maintain the political will to stay involved with the Asia-Pacific region, encouraging the military to increase the development of cheap and autonomous long-range missiles, long-range bombers and reconnaissance craft, and sharing military capabilities to help increase the strength of our allies in the area to resist China’s threat. These are extremely challenging tasks, even with the best rhetoric.

Another hurdle Haddick faces is his own advice. Even if it represents a plausible case for preserving peace and security for the United States, he cuts against a lot of tendencies in both the United States and beyond. For example, his strategy would require the United States to change its focus on expensive, multi-purposed ships and planes with short-range tactical strength to long-range capabilities. Additionally, it would require the abrogation or renegotiation of a treaty with Russia nearly twenty years ago. It would also require the American people to be willing to spend “blood and treasure” on defending small reefs and islands in the South China Sea. It would also take the people from nations like the Philippines, Thailand, Japan, Vietnam, Taiwan and South Korea to actually believe that the United States will support them in defending their legitimate claims without giving them a blank check to start a war with China or another nation.

Readers with an interest in military or business strategy and are open to blunt and provocative rhetoric will appreciate this book. The author is deeply knowledgeable about American and Chinese military strategy and capabilities, domestic and foreign politics, trade and business concerns. He has a definite agenda that he advocates with considerable skill and passion. Fire On The Water should provoke thought and discussion about China and its strategy, with reflections on the similarity between 1914 Europe and East and Southeast Asia today. These sobering thoughts should at least awaken people to the potential dangers. They also warrant the need to think and act effectively in order to preserve peace and well being through involvement and wise diplomatic and military strategies.