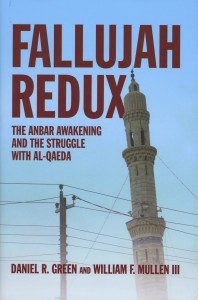 Events this past summer in Iraq have been disappointing to those observers who felt that Iraq was on the road to a brighter future. This is particularly true after the tremendous investments made by the United States in blood and treasure over the years. There are many competing theories as to why things turned around in 2007. These include a “surge” of troops, the courting of Sunni tribes, and even a de facto segregation of religious sects that resulted from two years of ethnic cleansing. Many of these theories lack is a detailed reporting of exactly how the United States and its Iraqi allies were able to significantly reduce violence in such a short period of time. Fallujah Redux, a new book by Daniel Green and William Mullen, fills this void with a unique perspective on how their Marine unit accomplished such a feat in the crucial city of Fallujah in the troubled spring of 2007.

Green, a naval officer assigned as a tribal and leadership engagement officer attached to a nearby Special Operations Command unit, and Mullen, a Marine Corps battalion commander, take turns in an innovative and seamless back and forth that mirrors how security and governance tasks are intertwined in the counterinsurgency fight. The authors build a backstory of the recent history of Fallujah from a tribal and security perspective. This allows the reader to begin with them on their journey once they hit the ground in the greater Fallujah area. This background is thoughtful and avoids the pitfalls that often accompany “I was there” tales. We are able to follow the events of the two carefully interwoven perspectives once the authors’ firsthand experiences begin in Fallujah.

Fallujah Redux takes readers through their assessment of the area and the important events in Anbar that reverberated all the way back to the White House. The Sunni tribes that rebelled against the Al Qaeda affiliate (then known as the Islamic State of Iraq) did not do so out of any love of the United States. Both the tribes and members of the security forces had reservations about the Americans, but chose to turn on the Islamic State because of insurgent groups’ brutality and desire to dominate the social and economic ways of the tribes of Anbar. The authors describe how they invested time and patience into building relationships and trust with partners from the community in a variety of ways. In the end, they were able to show how important this was to their success.

There are some valuable lessons here for readers to learn about warfare in the contemporary setting. It is obvious that the leaders of this unit, like many others operating in the theater by 2007, have experienced leaders who “got it.” Mullen comments how other leaders don’t seem to understand the need to dominate the entire spectrum of warfare. He justifies this philosophy, observing that “we will be ordered to do whatever the nation needs done,” and therefore cannot pick and choose the type of missions military units want or like to do (p. 126). This book is in many ways a convincing extension of that argument.

One way the unit was able to scratch out progress compared to previous units was its ability to find viable partners in the form of the Mayor, Chief of Police, and local Army commanders. By late 2006, anyone who volunteered for these positions on the Iraqi side were usually dedicated patriots who were willing to do a job that could very quickly get them killed. Mullen and Green found properly vetted partners they could work with and who, once empowered, could take the reins and move toward independent operations. Developing the mindset and competencies for fighting a counterinsurgency and finding the right partners both take a great deal of time. This need for time should serve as a cautionary tale for those who seek quick solutions that capitalize on “shock and awe.” Effective solutions on the ground need time to develop.

The best takeaway from this book is the demonstration of what is truly the genius of our Armed Forces – flexible, adaptive leaders in action. Green and Mullen use contingency funds creatively to enhance the security of their partners effectively. They experimented with techniques like prisoner release ceremonies, the use of tribal auxiliaries to the police, increased reliance on tribal sheiks in local politics, and establishing jointly manned security stations. Some of these ideas came from Ramadi, where the Awakening movement took solid root. Others came from professional reading like Galula’s Counterinsurgency Warfare: Theory and Practice and his Pacification in Algeria. Neither Green nor Mullen had strict marching orders to do what they did. They had leaders who gave guidance and end states and then got out of the way. The results were much greater than could have been imagined just six months previously.

In light of the current state of events in Iraq, my only wish is that the authors gave us a better picture of what happened after they left Fallujah. Like many military professionals, there is a perception that once the surge was done and violence fell, the job was complete. Any backsliding of the security situation must be the fault of politicians, particularly local Iraqi ones. Yet it was the military situation in Iraq that fell first. After a brief pause, the Islamic State began prosecuting a horrific campaign against the local governments, police, and tribal forces in Fallujah, Mosul, Diyala, and North Babil. War is not a sporting event that ends after a finite period. Our collective lack of curiosity as to what happened in Iraq after our units retreated out of the population areas of Iraq is responsible for our feeling of surprise at the recent collapse of Iraqi security in large areas of Sunni Iraq. I thought the authors could have paid more attention to this area. One other small correction: takfiri does not literally mean apostate (p. 62), it refers to an ideology where one claims the right to conclude another Muslim is an apostate, and therefore able to be killed. Many Iraqis called Al Qaeda in Iraq/Islamic State of Iraq members “takfiris,” because they killed otherwise observant Muslims either because they were affiliated with the government or not a Sunni.

This is a great work that fills a much needed gap in explaining why the surge was successful in reducing violence in Iraq from 2006-2008. Fallujah Redux tells a story our Armed Forces should be proud of for the hard-fought accomplishments in a very difficult situation, and it should help the reader understand some of the complexities facing today’s military. One hopes that many of the lessons of this book will be incorporated by our policy makers and military leaders so that we can end this cycle of deployments to a troubled but very important country to our security.

Craig Whiteside is an associate professor at the U.S. Naval War College, Monterey and teaches Theater Security Decision Making. He is an Army veteran of the Iraq war.