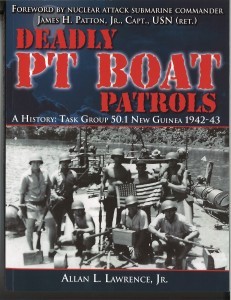 The strategic impact that the U.S. Navy exercised during the Second World War, especially in the Pacific Theater of Operations, is well known. The combination of aircraft carrier battle groups and amphibious task forces proved a war-winning combination. The U.S. Navy was also involved in other, smaller endeavors such as Patrol-Torpedo (PT) Boat operations. PT boats were used in both the Pacific and European theaters, they fought a much more close-quarters type of war than their larger contemporaries. As they were constructed out of wood, their service was in many ways a return to the days of “wooden ships and iron men.” Usually associated with the service of future President John F. Kennedy, or the TV series McHale’s Navy, they provided yeoman service in often brutal fighting at point blank range. Allan Lawrence Jr.’s father and namesake served on one such PT Boat, and this volume serves as a chronicle of both the unit as a whole and the senior Lawrence. The project began by tracking his father’s personal sidearm; which gives insight into the close proximity of the fighting, as well as a personal relationship to the narrative.

Allan Lawrence, Sr. had an adventurous career at sea well before he set foot on a PT Boat. Like many during the Great Depression, he sought work where he could. In 1934, he signed on with the Atlantic and Caribbean Steam Navigation Company. For the remainder of that decade, he crisscrossed the globe on multiple ships. One of these ships ironically took part in the rescue operation for a sinking Japanese fishing vessel. In 1940, he joined the Naval Reserve militia and saw service on patrol craft and a destroyer in waters that would soon be favorite hunting grounds for German U-Boats. With the opening of hostilities, Lawrence transferred to the Motor Torpedo Squadron Base and Training Center (MTSBTC) at Melville, RI. Around the same time, the Pacific Theater was being divided into two operational theaters: the Central Pacific Area under Admiral Chester Nimitz and the Southwest Pacific Area under General Douglas MacArthur.

While the SWPA contained hundreds of miles of coastline and many islands, there were no major naval units initially assigned to it. The first naval force stationed in the area was Naval Division Seventeen, and in particular Task Force 50.1, a PT Boat force. As the author’s father would soon find out, operating as a semi-autonomous naval force under army jurisdiction made an already complicated zone of operation that much more difficult. The issue of maintenance facilities and spare parts for the hard-riding PT Boats was a constant source of tension. While nominally assigned at least eight boats, the squadron was often down to two or three crafts. They once had no boats serviceable for action!

While the SWPA was under Army command, it was also an international affair. General MacArthur’s headquarters were in Australia. That nation contributed mightily to the effort in the theater. One of the criticisms that MacArthur has come under fire for is how he often downplayed the vital role that Australian forces had in securing victory. Much the same could be said of those Marines and sailors in the SWPA. The main role for Task Force 50.1 was to interdict Japanese reinforcements arriving in the battle area via barge. The boats quickly replaced half of their torpedoes with additional heavy machine guns and set to work.

Along with destroying the landing craft, Task Force 50.1 crews were tasked with the unsettling job of liquidating any Japanese in the water within a mile from shore. Most Japanese at this stage in the war were unwilling to surrender, so all PT Boat crewmen were issued a sidearm. The US Navy had actually contracted Colt to produce 1,591 M1911 automatic pistols for PT Boat crews. The author’s father brought his issued sidearm back to the United States. The boats usually operated at night because the Japanese often had air superiority initially. The dark would help mask the direction that they were approaching from. They were mostly used for lightening hit-and-run attacks. They also helped serve a “mopping-up” function in one well-known battle. The Battle of the Bismarck Sea (March 2-4, 1943) is best known as a sort of payback for Pearl Harbor. Aircraft of the U.S. Fifth Air Force and the Royal Australian Air Force (RAAF) attacked a large Japanese convoy carrying troops to Lae, New Guinea; causing heavy damage. This was the case during daylight hours; but once the sunset, the area became a PT Boat hunting ground. The crews referred to the battle simply as “That Lae Convoy Job.”[i]

Allan Lawrence Sr. was eventually medically evacuated from the area as a result of the effects of malaria. He was later assigned to the MTSBTC Melville fire department, quickly appointed as chief. He later became Chief Fire Inspector and Captain of the Newport Naval Base Fire Department, eventually serving as a police officer in Tiverton, RI. His son followed a similar path, serving in both the Hartford and Ellington, CT fire departments.

This is a fine book overall. The major criticism that I have is that additional detailed maps would have been helpful. My grandfather served in PT Boat squadrons during the war, which strengthened my interest in naval history. It is understandable why the younger Lawrence sought to research his father’s service. I recommend the volume to anyone interested in PT Boats, or the U.S. Navy’s “smaller” role in the Second World War.