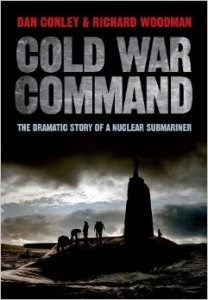 The authors use Conley in the third person as the vehicle to critically review the actions and internal workings of the Royal Navy and its Submarine Service between the end of World War II and the end of the Cold War. Conley’s tendency to document happenings of a general nature distracts rather than informs the reader. The insight into the events and circumstances in which Conley was a participant make the narrative alive and exceedingly valuable to professional mariners, submariners and maritime military managers.

Conley served in four diesel submarines, commanding HMS Otter. He served on three nuclear submarines, commanding HMS Courageous and HMS Valiant. He was also on the staff of U.S. Submarine Development Squadron Twelve and graduated from the US Naval War College. He served twice on the Royal Navy’s Tactical Development commands and led the Royal Navy equivalent of the INSURV Board for acceptance of new ships. In the Ministry of Defense, he was responsible for nuclear weapons targeting. This broad breadth provides a wide scope to describe Royal Navy equipment, organizations and policies from the late 1960s until the end of the Cold War. Much is viewed unfavorably. The authors accuse the Royal Navy of being stuck in its past with outdated and obsolete equipment, senior officers unable to progress and civilian overseers and supporting workers ignorant and slothful. In particular, the failure to develop suitable torpedoes, Conley’s specialty, serves as an underlying theme throughout the book. References to “design defects” on weapons and submarines but not further identified may frustrate other submariners though these do not detract from the worth to the regular reader.

The book is replete with remarkable descriptions in colorful British colloquialisms and typical understatement, e.g. “…an unexpected underwater collision is a very alarming experience to those involved.” The excellent descriptions of basic submarine design and operation are enlarged with characterizations of the hazards and discomforts inherent in battery driven submarines. Except for the induction through the bridge access hatch, his descriptions of the “O” and “P” boats could easily be applied to Guppys and even Barbels. The authors’ clear descriptions of problems common to submarining are informative for both neophytes and serious readers of the genre. The description of surfaced operations on the bridge cockpit in heavy weather northwest of Great Britain will bring a shiver to anyone who has had the experience – not one to be sought or savored. Descriptions of machinery malfunctions in Conley’s three commands are harrowing. Their repeated and continued existence do not reflect U.S. Navy’s practices and perhaps reflect a lack of maintenance activity below the shipyard.

Conley’s early service in a surface warship and four conventionally powered submarines serve as a memorial to another time. Hijinks and alcohol were characteristics of the crews of both navies. By 1967, the advent of nuclear power and its technical requirements brought change. “The new Submarine Service was moving away from being a peripheral, semi-piratical organization, regarded by the rest of the Fleet with a mixture of envy and affectionate scorn for its disregard for the full panoply of naval protocols.” Assignment to HMS Swiftsure, a nuclear submarine, in 1973 brought him into the new Submarine Service: “There was an end to the old buccaneering way of doing things and – symptomatic of this – the era of ‘pirate’ rig at sea had ended and the culture of heavy drinking when alongside was over.”

Conley had three commands, an old conventional submarine and two nuclear submarines. He describes these operations with enthusiasm and élan. In the early eighties, he served as the Royal Navy representative on the Staff of the Submarine Development Squadron in New London, CT. From this vantage, he observed the differences in the practices of the two submarine forces. American officers will be interested (and pleased) with his comparisons.

Because the Royal Navy’s practice was to groom one submarine for Barents Sea reconnaissance missions, Conley had no experience in performing such missions. However, the RN’s operating areas included the transit routes for Soviet submarines based in the Northern Sea Fleet en route to and from the Western Atlantic and Mediterranean. In 1984 when the Soviet Navy was at its peak of operations out of area, Conley’s ship, HMS Valiant, intercepted and trailed three different Victors and an Echo in addition to detecting a Yankee SSBN on one operation of two weeks duration. On his next underway, he detected nine different Soviet submarines, trailing seven over a three-week period. His descriptions of these operations underplay the difficulty of such encounters.

Conley’s critical observations of mismanagement in what most Western sailors consider the second best submarine force may be startling to some readers but they provide warnings about paying attention to details often ignored in the upper tiers of management, For that reason, the book is well worth reading by anyone concerned with management and procurement of technically advanced maritime equipment. The first reaction of active officers and their civilian supporters to Conley’s criticisms should be to ask themselves, “Are we guilty of this?”

Admiral Holland’s active service was primarily in submarines. He is a Director of the Naval Historical Foundation.