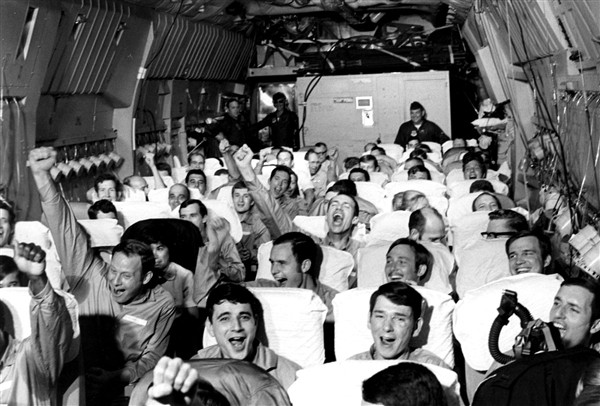 Newly freed prisoners of war celebrate as their C-141A aircraft lifts off from Hanoi, North Vietnam, on Feb. 12, 1973, during Operation Homecoming. (Defense.gov)

In 2006, during the 25th anniversary of the return home of the 52 American hostages in Iran, then Washington Post staff writer Les Carpenter wrote a wonderful piece about the generous gesture of MLB Commissioner Bowie Kuhn to grant lifetime game passes to each of the detainees released in 1981. The article went on to discuss the lives of several hostages who utilized the priceless passes over the course of the preceding decades.

The article, however, is only part of the story of Major League Baseball’s special treatment of VIPs. Lifetime baseball passes were not a phenomenon of the 1980s alone. In fact, the concept of lifetime passes dates back to the turn of the 20th century, with a significant special category created in the early 1970s. 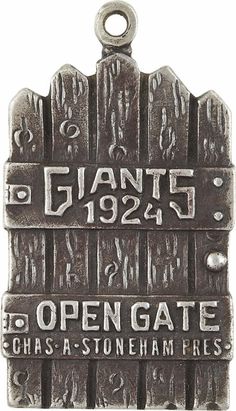 In 1896, silver coins were given out to the champions of the National League and (then) American Association Circuit. Teams like the New York Giants issued lifetime passes to the Polo Grounds throughout the early twentieth century. According to a brief history of the metal passes in the latest issue of the Numismatist, you had to be an “important person” of prestige to receive the silver passes. (Image Credit: Pinterest)

In 1896, silver coins were given out to the champions of the National League and (then) American Association Circuit. Teams like the New York Giants issued lifetime and season passes to the Polo Grounds throughout the early twentieth century.   According to a brief history of the metal passes in the latest issue of the Numismatist, you had to be an “important person” of prestige to receive the silver passes.

Carpenter mentioned a conversation between Navy Admiral Jeremiah Denton, a former Vietnam War POW, and Commissioner Kuhn during the hostage crisis in the Washington Post article. According to Carpenter, the genesis of the lifetime pass grew from that very discussion. Kuhn was “hard pressed” to note any other time those baseball passes were given out. A week after the article was published, Marc I. Alvarez, son of Navy Commander Everett Alvarez, Jr., noted the memory lapse of the former Baseball executive. Commander Alvarez was held at the “Hanoi Hilton” for 8.5 years, making him one of the longest held prisoners of war in American military history. According to Mark Alvarez, among the many gifts given to returning POWs in 1973, when Kuhn was Commissioner, was the famed lifetime baseball pass. One of the POWs who received that pass was former NHF Executive Director Captain Kenneth L. Coskey, USN (Ret.). Captain Coskey served as NHF Executive Director from 1987 to 1999. During the Vietnam War, he flew the A-6A Intruder before being shot down over North Vietnam. Captain Coskey spent five years in captivity before being released with nearly 600 other POWS in the spring of 1973 during Operation Homecoming.

Current Executive Director Captain Charles Creekman, USN (Ret.) had a chance last month to catch up with Kenny Coskey, the son of Captain Coskey. Through a series of email exchanges, Kenny reminisced about the pass and the special experience of going to see a baseball game as a guest of Major League Baseball.

According to Coskey, he and his father cherished the pass. Baseball was still the predominant national pastime in the 1970s, and a way of life for countless Americans. Although no pennant race could compare to the feeling of freedom, the baseball pass was just one of the many endorsements and incentives given to the men who came back in 1973. Vietnam POWs understood that. They appreciated the gesture from Major League Baseball all the same. It was a great opportunity to use the familiarity of baseball to help ease the minds of the POWs as they returned to their regular lives. What better way than with something that symbolized American competition and spirit?

The rectangular pass itself measures 2 inches by 3 and 3/8 inches – no larger than your average credit card. It is made of aluminum and finished in brushed gold. By all appearances, the pass seems plain by today’s standards. Yet in your possession, you could pass through any the gates of any stadium around the country. The pass gave each recipient and their guest exclusive admission to any Major League or Minor League baseball game, with exception to the playoffs and World Series games. It was truly a Golden ticket. POWs and hostages alike traded in the red carpet vanity of Hollywood-style celebrity treatment for peanuts, Cracker Jack, and bleacher seats.

Many did. Marc Alvarez and his father went to several iconic games that would have been otherwise “nearly impossible to attend.” He mentioned, among others, attending Cal Ripkin’s record breaking game and Nolan Ryan’s final game as a Texas Ranger. Kenny Coskey also noted the power that the card held as a “way to connect” to his father. He discussed how important the pass was to his childhood experiences in the immediate years following the end of the Vietnam War:

“Boy, did my dad and I take advantage of the pass, especially in Chicago and at Baltimore’s Memorial Stadium. Major League Baseball would usually seat us right behind home plate or in some really good seats.”

The original baseball lifetime passes were issued to only those deemed high profile enough. The passes issued to POWs in 1973 were a small token of gratitude from Major League Baseball to men like Captain Coskey and Commander Alvarez for their service and sacrifice. Through their hardships and pain, those passes allowed their lives to move forward in peace, sharing the experience an endless summer of the game with loved ones.