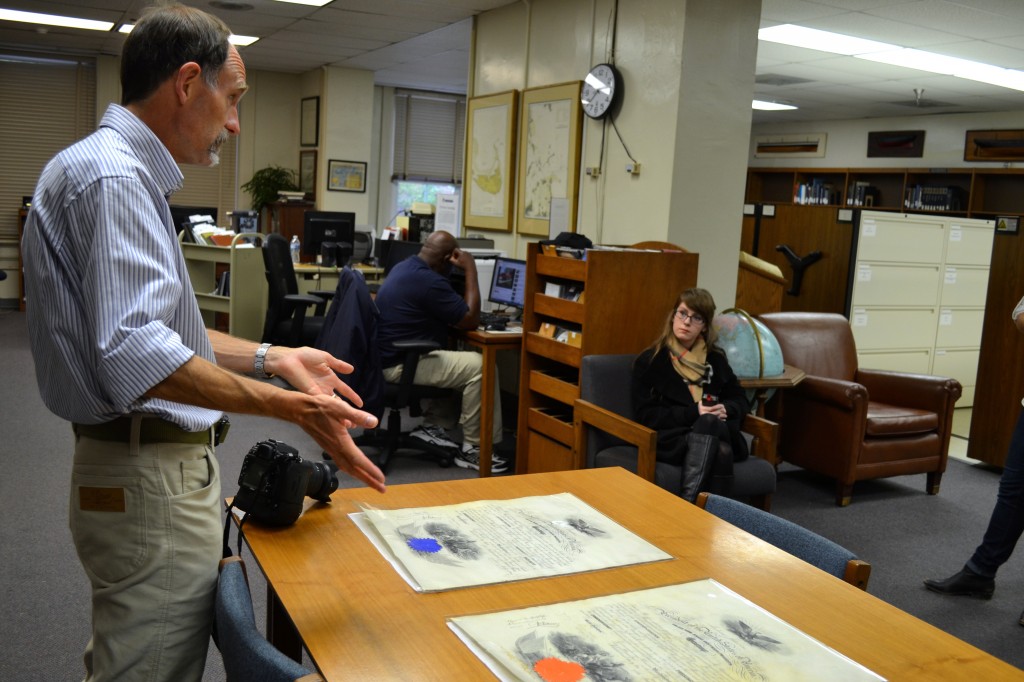 It’s fall here in Washington, D.C. The hot summer heat and brown grass are finally giving way to cooler temperatures and changing leaves. For some, this pleasant change in weather can mean only one thing: the slow approach of the holiday season. It’s that magical time of the year when friends and family gather together in living rooms and dining rooms around the country to reminisce about their time together. Stories of the past are shared around the table with the same frequency as baskets of warm dinner rolls.

Most of us endure this ritualistic remembrance into family history as a yearly occurrence. For American-born Australian resident Ben Talman, this deep insight into the past occurs daily. If Ben’s family tree were a living thing, he would have set up a house in its branches long ago. He is truly living it. Ben ‘s family history pops up in his everyday life more than he would like to admit. “I can’t escape this stuff,” he said during his visit to the Navy Department Library last Thursday. “What are you going to do when that happens? You have to study it.”

The New South Wales resident came to the states last week and decided to stop by the Washington Navy Yard to view naval documents that his father, Benjamin Long Edes Talman, donated to the Naval Historical Foundation in 1961. His father’s papers were eventually given next door to the Navy Department Library, who has cared for them ever since. The documents included several logs and correspondence of his father, a WWII-era Navy Captain, as well as the Navy commission papers of his great grandfather, LCDR Benjamin Long Edes.

In case you caught our post last week about the ever-changing role of digital naval history, Ben is living proof that this kind of passion, devotion, and expertise extends far beyond the walls of academia. NHF Curator Emily Pearce remarked how “beside himself” he was at seeing the documents up close. His level of enthusiasm for naval history was both infectious and uplifting. It was a pleasure to sit and talk with Mr. Talman about his own life and the extraordinary story of his naval heritage.

Ben’s extraordinary quest to discover his family’s past began back in 1975. “I noticed that I had this very long middle name, and I wanted to find out more about it.” That initial interest led Ben down a rabbit hole of his family’s history he has yet to crawl out of ever since. His family’s story has taken him all over the world. From Gallipoli to Washington, D.C, he has no plans of stopping anytime soon. Mr. Talman described studying his family’s history “like a drug” that you can’t get enough of:

The roots of Ben’s family tree are built on a strong foundation of America’s history. His 18th century ancestor, Boston resident Benjamin Edes, is considered by many to be the “Poet of the American Revolution.” Other close relatives have ties to the National Weather Service and the United States Army. The most interesting of family members, however, touch the very fabric of nineteenth and twentieth century naval history. 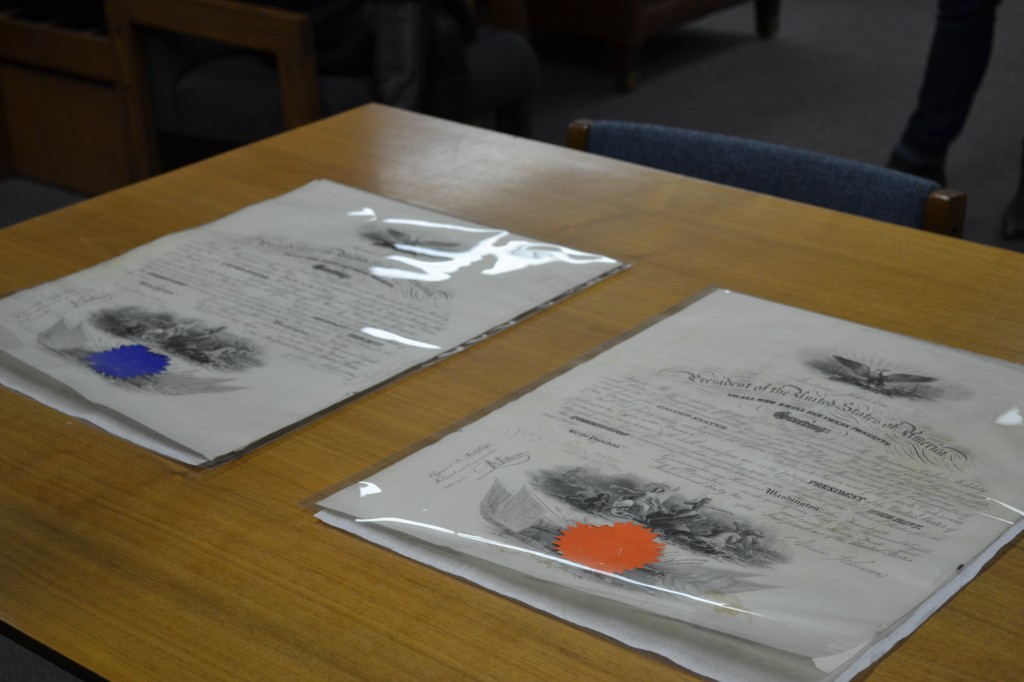 Indeed, the most interesting set of documents in the donated collection came from his great grandfather, Benjamin Long Edes. Two nearly identical U.S. Navy commissioning documents for his great grandfather were spread out on a table to view inside the Navy Department Library. Both are signed by then President Andrew Johnson in 1865. Although the documents are for his great grandfather’s commission, the last name and seal on each piece of paper are different. “His family wanted to keep the tradition of his family name alive,” he noted as he stared deeply into the black print of the document. “So, he had to go to the Navy Department and request another one made to reflect his family’s wishes (both Long and Edes).” 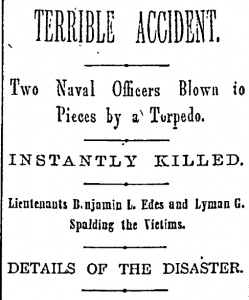 Benjamin Long Edes’s story really starts to get interesting after his commission in 1865. After spending several years with the European Squadron, Asiatic Squadron, and the Washington Navy Yard, LCDR Edes was transferred to the Naval Torpedo Station in Newport, RI. It was there in 1881 that he died in a fatal torpedo accident. According to one account, the incident occurred when Edes and one other were directed to detonate a torpedo in the harbor. After looking around the Internet for more information of the unfortunate incident, Ben was elated to find that the accident made the headline news of the 29 August edition of The New York Times and New York Herald.

Ben’s father, Benjamin Long Edes Talman, served in the United States Navy during the Second World War in the European theater. Captain Talman was the commanding officer of a destroyer in 1943, and participated in the invasions of North Africa, Sicily, Italy. He also served with FDR, Jr. during his time in the U.S. Navy.

Naval history courses through Ben’s veins. He still wears Captain Talman’s 1935 USNA class ring on his ring finger as a symbol of respect and admiration of his late father’s accomplishments. Ben spent the majority of the early afternoon weaving more tales of his family’s history. Each story expanded on the history of the other. He laughed when I mentioned that he was in the “Forrest Gump” of U.S. Navy families. “If I lived here in D.C.,” he said in response, “I would be coming here every single day.” By the end of our conversation, I had no doubt he was telling the truth. 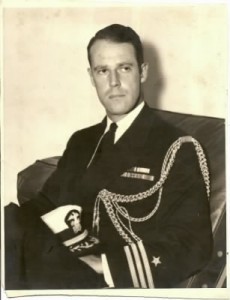 Ben is an active participant in discovering his family’s storied history online. “It’s too difficult to get the rest of my family to see the images.” Because his family stretches from Australia to the United States, he posts many of his finds on Facebook. “It’s nice that I can post something about our family history and the rest of my family can see it from around the world,” he said. Ben also posts regular updates on Ancestry.com’s Fold3 platform about his family history, in particular his father and great grandfather. He hopes to post his recent finds from last week’s trip here on the website very soon.

Ben Talman came here last week with a deep admiration for what organizations like the Navy Department Library/NHHC and the Naval Historical Foundation are doing to preserve naval history. In his own words, Ben admitted how much of a “devoted fan” he was to these organizations. As he walked out of the gates of the Washington Navy Yard at the end of the day, he had a few fans and admirers of his own.

Special thanks to Emily Pearce (NHF) for assisting Mr. Talman throughout the day.