Before Commander Bond, there was an even more famous Scottish naval hero.

Several weeks ago, a tiny museum along the Solway Firth received a most interesting visitor – a Russian Admiral. Former Russian submarine skipper Admiral Alexander Zhurkov visited the John Paul Jones Birthplace and Museum in Kirkbean, Scotland on 19 September. Admiral Zhurkov and his wife Svetlana took time out of their first visit to the United Kingdom to pay their respects at the Revolutionary War hero’s childhood home.

Cementing the relationship between Jones and Russia, Admiral Zhurkov was recently named a Patron of the Birthplace Museum Trust. According to an article published in the Dumfries Courier, the 57-year old retired Admiral was delighted at the opportunity his new appointment gives him to learn more about John Paul Jones and the his tie with Russian naval history. Admiral Zhurkov was deeply “impressed with the museum” and the work done to preserve the memory of John Paul Jones.

John Paul Jones (born John Paul) played a critical role in the development of the American and Russian Navy. After living a simple existence in Scotland, John Paul Jones eventually found his way to the United States, where he changed his name from John Paul to John Paul Jones to avoid persecution for past tribulations overseas.

Putting his past aside, Captain John Paul Jones found his place in command of several ships of the American colonies. During the American Revolution, he and the crew of Bonhomme Richard found fame in the Continental Navy at Flamborough Head in 1779. His victory would earn him the distinction as the Father of the United States Navy. He spent the remainder of the war training naval officers and advising the establishment of a permanent U.S. Navy.

After the war ended, Jones traveled to Russia where the Empress Catherine II made him a Rear Admiral of the Russian Navy. Jones died in Paris in 1792, never fully seeing the vision of the United States Navy he helped build in the immediate post-war period. His remains are buried in a marble sarcophagus in the chapel crypt of the United States Naval Academy in Annapolis, Maryland. 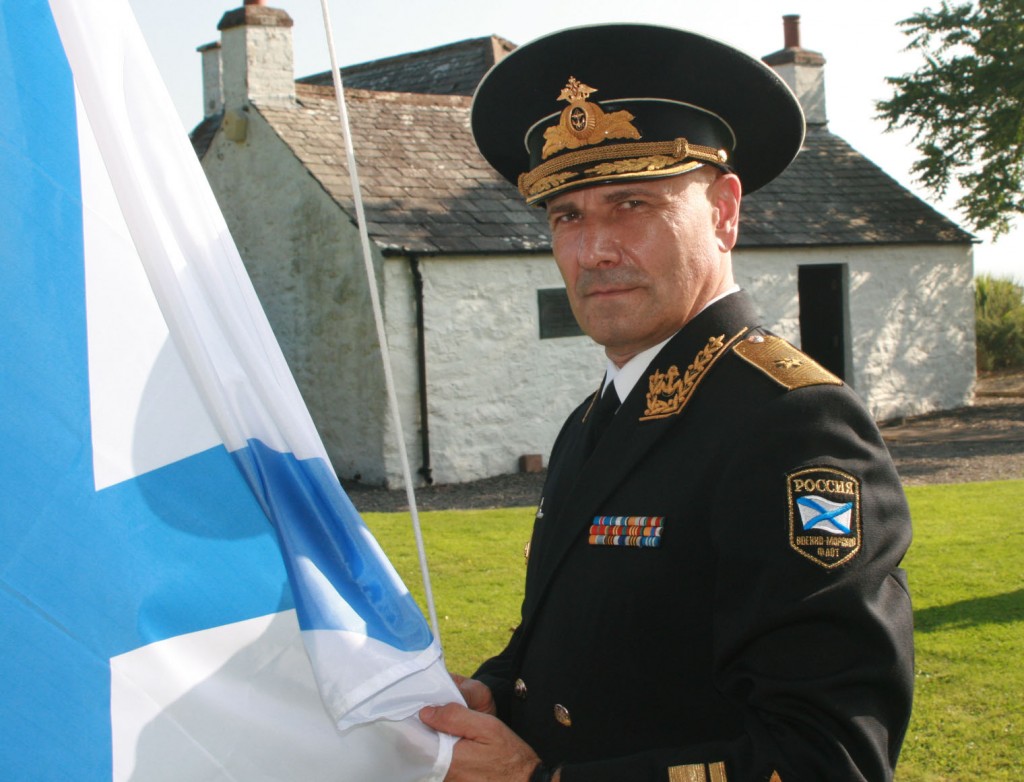 Two notable Patrons of the John Paul Jones Birthplace Museum Trust, Admiral Paddy O’Riordan and Lt. Colonel Sir Malcom Rose, were present during Zhurkov’s visit. According to the two British Patrons, the highlight of the visit was a small ceremony held on site where he hoisted the 1788 flag of the Imperial Russian Navy, the very same naval jack flown on John Paul Jones’s ships during his service as Kontradmiral. The Imperial Russian flag hoisted looks oddly enough like the Scottish Saltire flag in reverse (a white field instead of blue).

The foundation’s personal relationship with John Paul Jones and his birthplace dates back to the end of the Korean War. In 1953, the Foundation joined with the Daughters of the American Revolution (DC Army/Navy Chapter) to erect a birthplace marker in Kirkbean. The marker was accepted on behalf of Vice Admiral Jerauld Wright and the Honorable Winthrop W. Aldrich, Ambassador to the Court of Saint James, by C.W.B. Brackett, the one time owner of the John Paul Jones Cottage, and Scottish Minister of State the Earl of Home.

During the 250th anniversary of the birth of John Paul Jones in 1997, several commemorative events were held on both sides of the Atlantic. Former NHF Director VADM Robert F. Dunn (USN), Ret. helped plan and coordinate many of the festivities and ceremonies here in the United States. including a USNA midshipman parade and a wreath laying at the tomb of Jones.

Speaking of respect, here is a throwback image of Captain Charles Creekman (then Deputy Director of the Naval Historical Center) and Chief Frank Arre (NHF/NHHC) placing a wreath at the JPJ Statue at 17th Street and Independence Ave (Near the WWII Memorial Today) in Washington, DC during the 250th anniversary of his birth: