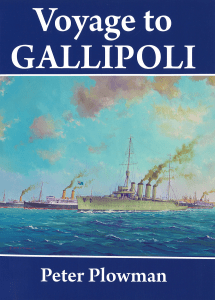 Just in time for the beginning of the First World War centennial commemoration in Australia and New Zealand, Peter Plowman has produced a work on the transports that took the Anzacs to Gallipoli. Although he has previously published a general work on troopships, Voyage to Gallipoli contributes to the historiography on the experiences of New Zealanders and Australians in the first eight months of the war with a focus on the transports that took them there.

The first chapters focus on the naval situation in the Pacific in August 1914 and the contribution both Dominions made to the British Empire by seizing German colonies in the Pacific. The following chapters cover the formation of the Australian Imperial Force (AIF) and the New Zealand Expeditionary Force (NZEF) and what became a false start and the threat of the German cruisers to the troopship convoys. He then discusses the departure of the NZEF to Australia and the gathering of the Australian and New Zealand troops at Albany prior to departure. There are chapters devoted to the cruise of SMS Emden and its destruction at the Battle of Cocos Islands by cruiser HMAS Sydney. This single ship’s action paved the way for the convoys to travel safely to Aden.

It was at Aden that the destination for the AIF and NZEF was changed from the Western Front to Egypt, thereby putting them on course for the Gallipoli Campaign. When the convoy left Colombo the destination was Britain. This changed by the time they reached Aden, in part due to a desire for the Australian and New Zealanders to train in the desert and avoid the miserable conditions of Salisbury Plain. Thus began a series of events that would place the Anzacs at Gaba Tepe on the morning of 25 April 1915. The chapter on this event is very well done with contemporary accounts from the participants in the decision and highlights an aspect that is not fully understood in the national memory of both countries.

Subsequent chapters deal with the arrival in Egypt and the history of the hospital ship HMHS Kyarra and then second convoy that brought reinforcements for the AIF and NZEF to Egypt. The final chapters deal with the transports to Lemnos and to Gallipoli itself for the landings in April and the beginning of the Anzac legend.

Overall, this is a very well researched and written book. There are plenty of key details recorded that are of use to any researcher, especially on the formation of the convoys and details of the numbers carried and the formations of the convoys at sea with their escorting warships. A worthy addition to Anzac history and a work that covers an aspect of warfare and military history that is all too often not recorded in a narrative and as a New Zealand historian of the First World War, I am very grateful.

Wynd is a researcher for the National Museum of the Royal New Zealand Navy, HMNZ Philomel, Devonport, Auckland, New Zealand.