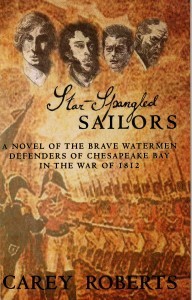 Historical fiction provides a compelling call for the reader to go well beyond traditional history. I for one have been long happy to absorb the facts, theories, and analyses often well crafted into secondary sources, such as Steve Vogel’s excellent telling of the near cataclysmic summer of 1814 in Through the Perilous Fight – Six Weeks that Saved the Nation. Painstakingly researched and engagingly argued, this book is simply definitive on its topic.

Vogel’s mission differs from that of Carey Roberts, who takes some of Vogel’s real characters and breathes feeling and emotion into their actions. She also embraces historical figures less well documented than the American hero Joshua Barney and British Rear Admirals Cockrane and Coburn. She draws the reader into their reactions during such momentous events in Washington, Baltimore and thereabouts throughout the summer and early fall of 1814.

Take, for instance, the escaped slave Mingo Jones, torn between the needs of his colleagues during a time of war and his own sense of self-preservation.  While making up perhaps one-sixth of the crews of the American navy through the 1812-1815 period, the perspectives of Blacks and Native Americans have largely been ignored in traditional histories (excepting, of course, recent works by Alan Taylor such as The Civil War of 1812 and his 2014 Pulitzer-winning The Internal Enemy: Slavery and War in Virginia, 1772-1832.)   By considering Mingo’s perspective and trying to imagine how a man coming from such lower and constrained circumstances would react in battle among fellow soldiers forces the reader to expand and consider events in a new and fresh way.  Likewise, through the voices of boys like Jason and Caleb (the drummer boy), readers are invited to re-live the immature yet vivid feelings of excitement, drive and duty held by young soldiers not quite men.

Star-Spangled Sailors tells most of its story through the voice of a young and promising white sailor-then-soldier named Jack Webster.  Webster, who feels shamed by the retreat of the Americans at Bladensburg, must overcome his own sense of failure in protecting Captain Joshua Barney through a journey of personal retreat followed by re-grouping and making a stand.  This, at the climax of the story, takes place not at the glorified venue of Fort McHenry itself, but at Babcock Battery, a small but important defensive post outside the fort. By taking command of a much smaller, and ostensibly insignificant post plagued by the terror of darkness and the knowledge of being vastly out-manned and out-gunned, Webster becomes the hero after all.  This brilliant American tactic of protecting Baltimore’s vulnerable tributaries as Webster did may well have turned the tide while more major and widely recorded assaults were taking place upon Fort McHenry and by the thousands of British marines who had landed at North Point the day before and were marching towards the city.

Carey C. Roberts portrays sailing-master Jack Webster’s character not just as self-sacrificing, brave and heroic, but as a man with real emotions. He is susceptible both to self-doubt and to the allure of an attractive farm girl, Rachel.  I’ll admit here as reviewer of this book that once the story line ventured into romance my antennae went up — but through the course of the story I got pulled in and thought — “Hey, why not factor in that we are all human after all . . . perhaps this is an under-represented aspect of history?”  The few romantic episodes are brief and to the point, driving the plot while not becoming distractions or sub-plots within themselves.  Even British Major-General Robert Ross’s demise takes on a fresher, more sympathetic mood. It brings to mind Benjamin West’s 1770 depiction of General Wolfe mortally wounded at Quebec, which evokes perhaps pity even more than hero worship.

As a music historian by profession, I admire the author’s attempts to invoke a sort of soundtrack into the narrative along with her visual and emotional imagery. “Serious” historians rarely draw upon musical cues or context, excepting the Canadian author Donald Graves who has taken to quoting lyrical excerpts from songs as chapter headings. I personally congratulate and thank Carey for being so culturally diverse.  The details of her musical allusions are not always precise, but I commend her open-minded inclusiveness than nit-pick over the choice of instruments, composers, or the like.

Finally, and perhaps most importantly, I admire the author’s success in keeping the narrative so very close to factual accuracy.  Other more strict scholars like Vogel, Don Hickey, or Ralph Eshelman would probably have noticed and argued details unknown to me, but I had the very strong sense that the author not only did copious homework but at no point felt compelled to deviate or exaggerate the story line.  Instead, Carey C. Roberts has flushed the story out believably and interestingly, and for that I would strongly recommend that you read this book as a way to feel as much as understand this rich moment in time.

Dr. David K. Hildebrand, is the Director of The Colonial Music Institute.