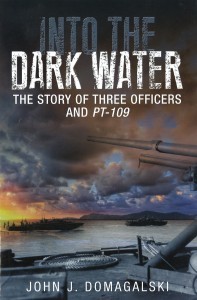 Mention PT 109 to the “Greatest Generation” and “Baby Boomers” and you will conjure up a slew of memories: the tie-clips worn by men working for John F. Kennedy in the White House, the bestselling book by Robert J. Donovan, and the not so accurate (and not so good) 1963 film starring Cliff Robertson. They might even recall that a replica of the vessel was used as a touring boat around the Wildwoods in New Jersey in the 1960s. The memories come with a wistful smile for the days of the New Frontier. It was a time that Americans felt confident they could do anything – and often did. PT 109 was an iconic image in those years, even though her remains have lain at the bottom of Blackett Strait since 1943.

Into the Dark Water is written by John J. Domagalski, an accomplished author of books and articles on the Pacific theater in World War II. Although there are books written about American ships from the Constitution to the USS New Jersey, Mr. Domagalski had the novel idea to write about PT 109’s history, from her launching in Bayonne, New Jersey, in May of 1942 to her tragic demise fifteen months later. PT 109 was sliced in two by the Japanese destroyer Amagiri in the inky black waters off the Solomon Islands.

Domagalski takes his readers through his tale step by step, beginning when the “relatively small fleet of such vessels” went from drawing board idea to the shipyard and eventually the South Pacific. With an engineer’s eye, he describes their structure and inner workings clear enough for any landlubber to grasp. He also provides some insightful and interesting background on small boats in wartime. He recounts the first use of PT boats during the desperate days at Bataan, and the heroism of Lt. John D. Bulkeley and his men who won national attention for their courageous efforts in the Philippines.

The story of PT 109 is really the story of the men who lived, fought, and died aboard her. That is where Mr. Domagalski’s story picks up speed. He introduces PT 109’s first commanders, Rollin Westholm, an Annapolis grad, and Bryant Larson, who enlisted in the Naval Reserve just before Pearl Harbor. Both skippers were from Minnesota. He also makes sure to mention the other officers and sailors who served on PT 109 during her service in the Solomons. It’s also their story.

Mr. Domagalski places the reader at the conn during the harrowing days of Guadalcanal, as the Japanese Navy runs “the Tokyo Express” in an effort to supply the emperor’s besieged soldiers on that island. Working in squadrons, which were frequently under Westholm’s command, PT boats armed with torpedoes and machine guns took on Japanese destroyers in near nightly David-and-Goliath confrontations. This was made all the more harrowing by the Japanese planes above. If the destroyers couldn’t spot the Americans, the planes certainly could, thanks to the wakes of the boats.

Missions that were beyond risky often interrupted a PT boat sailor’s life ashore, where they would live aboard ship and eat a steady diet of SPAM. After watching one PT boat captain make a high speed attack at a destroyer, whose phosphorescent wake that made her all too easy a target, Larson would sadly recall, “He never had a chance.” While Westholm’s winning personality and Larson’s volunteering spirit are noted, it’s a shame there might not be enough documentation to have fleshed out the profiles of these two heroic sailors.

There’s obviously more than enough documentation on John Kennedy’s wartime experiences to fill any book. Domagalski tactfully sticks to Kennedy’s actual experiences and avoids a revisionist’s quest for the quirky (Nigel Hamilton’s book on JFK comes to mind). As he does with Westholm and Larson, he continues the story as that of the 109 and her men. His tale of her sinking, the rescue of her sailors, and Kennedy’s role in saving his surviving crew is a gripping account, told with verve and pace.

Mr. Domagalski continues with the war experiences of Westholm, Larson, and Kennedy after PT 109, and their lives after the war. He also tells of the efforts of Dr. Robert Ballard to find PT 109, which has been buried in the Pacific for fifty-nine years. Well researched and written,Domagalski has done something admirable with the PT 109 saga.

Tim McGrath is the author of John Barry: an American Hero in the Age of Sail, winner of the American Revolution Roundtable Award for 2010 Book of the Year, winner of the Navy League of the United States (New York Council) John Barry Award for Maritime Literature, and a finalist for the Samuel Eliot Morison Award for Excellence in Naval Literature.