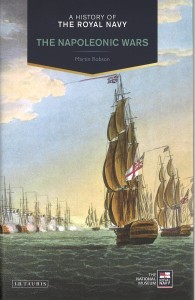 Robson succeeds in producing a comprehensive yet readable overview of the naval actions during the period. However, the book suffers from being part of a series. The civil history of the Royal Navy, including logistics, staffing, and naval architecture is ignored in The Napoleonic Wars. Readers are referenced to another book in the series, The Age of Sail.

This forces readers to view naval operations in isolation. Yet the battles fought and the naval strategies used are a function of logistics and institutional organization by both sides. Their neglect in this volume leaves readers unable to appreciate the reasons why the battles were fought, and why they were fought in the manner in which they were fought.

Another weakness is the book’s structure. Individual chapters are organized by the theater of each war. However, this works well in the chapters on the Trafalgar Campaign and the War of 1812, as they are self-contained topics and lend themselves to this structure.

Robson breaks the French Revolutionary wars into chapters on “Home Waters,” the Mediterranean, and “everything else.” In the Napoleonic Wars, he maintains the structure, while adding operations in the Baltic to the Home Waters presentation, and the Peninsular War to the Mediterranean. These wars lend themselves badly to a theater breakdown.

Events in one part of the globe affect those in other theaters. Actions in the first chapter on each war often seem puzzling until put in context by reading the remaining chapters on the war. Readers are also entertained by officers holding senior positions or ending their careers in one chapter to reemerge in a junior role in a later chapter.

The Napoleonic Wars can serve as a useful introduction for readers unacquainted with the period. It is also useful for someone who possesses the entire book series with access to the material referenced in the other volumes.

For everyone else, Clowes’s work, available online through Internet Archive, may offer a better and more comprehensive coverage of the period. Those seeking a more recent treatment might look up The Command of the Ocean: A Naval History of Britain, 1649­-1815, by N.A.M. Rodger.