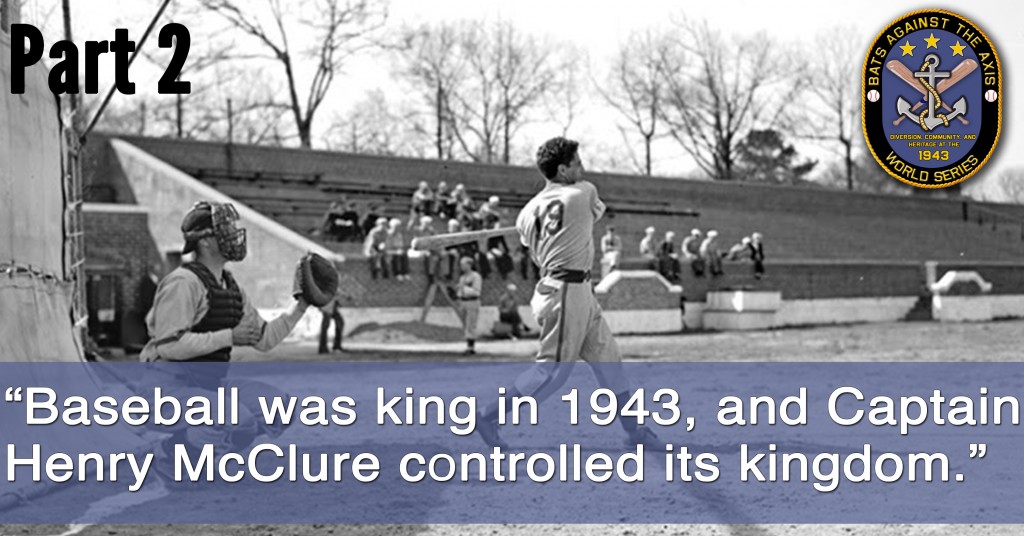 Baseball in Norfolk radically changed the lives of the countless sailors stationed there during World War II. As a means of diversion, sailors at NTS Norfolk created their own private baseball utopia amidst the horrors of war waiting for them in the European and Pacific Theaters. Part two of the four part series. READ PART I HERE.

Navy baseball players worried about what was going on in the field directly in front of them. Sailor-spectators watching those games in 1943 had the entire deadly expanse of ocean in the Atlantic and Pacific waiting for them once they completed training. Although the Battle of the Atlantic had quieted considerably after the U.S. Navy figured out an effective convoy system, the threat of German U-boat attacks was ever-present. By 1943, the German Navy was losing a quarter of its U-Boat flotilla at a time. The Battle of the Atlantic had effectively climaxed. Thirty-four German subs were lost in May 1943 alone. Germany could not make up for the losses, and the Atlantic war came to a relative trickle in the remaining war years.

The Pacific was another animal altogether. The Navy fought intensely from 1941 until the end of the war in 1945. With the Guadalcanal Campaign beginning to wrap up, stakes in the Pacific were never higher. CNO Admiral Chester Nimitz sought to involve thousands of new sailors and nearly every type of warship in the impending offensives in the Gilbert and Marshall Islands. There would be little time between a sailor’s training and baptism by fire.

With so much possibility to see combat, sailors needed something to divert them from the harsh reality of war. Baseball filled that aching void. 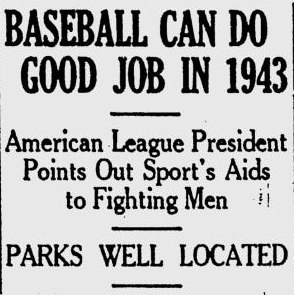 Major League Baseball was also looking to fill a void – its players. Despite the setbacks, owners and stakeholders still anticipated big crowds for the 1943 season. Newspapers around the country ran a story before spring training began with an optimistic headline about the sport’s future: “Baseball Can Do a Good Job in 1943.” The article mentioned how bad “the boys in service” wanted to see baseball played.

They were right. Servicemen DID want to see baseball. The main problem was location. Could anybody and everybody attend these games? What was the proximity of the nearest stadium to training stations in Norfolk, VA or Pensacola, FL? Would games fit in with most weekend liberty passes? The article neglected to answer these questions. The “boys in service” had to see it where they could and when they could. Would any G.I. want to go to a game where the best players were already gone, anyway? According to baseball historian and author Bill Nowlin, all that remained by 1943 were teams “with players who wouldn’t have been good enough to play in the big leagues otherwise.” NTS Norfolk skipper Captain Henry McClure was more than aware of the favorable situation at his fingertips. McClure knew he could bring a high quality of game to his sailors. Baseball was king in 1943, and Captain Henry McClure controlled its kingdom.

Baseball was not so good for the major league that year. Chicago sportswriter Hugh Fullerton reported a lackluster season start in April:

“The opening-day major league scores lead us to wonder whether the 1943 model baseball is dead, or just the hitters.” (Hugh S. Fullerton, Jr.)

So, the American public was sadly cut off from its most beloved players. Civilians might hear about them mentioned in the passing newspaper article or radio broadcast. Otherwise, their details were as closed to the public as the stations themselves. In the meantime, one would have to enlist to see them play. Norfolk, the most unlucky station for duty, now became one of the best places to train before being sent off into the theaters of war.

Professional team owners now had to find a way to bring service players back to stadiums. This was a near impossibility with war rationing in full effect. All American Girls Professional Baseball was an important step to boosting morale, but it did not draw the kinds of crowds and notoriety most owners wanted. The vast majority of owners located nearby training stations and bases would have to trade their usual proceeds for purely patriotic purposes. By the time the 1943 season came around, teams planned to use their large stadiums for War Bond games. Teams like the NTS Nine had a chance to play in the national spotlight once again. 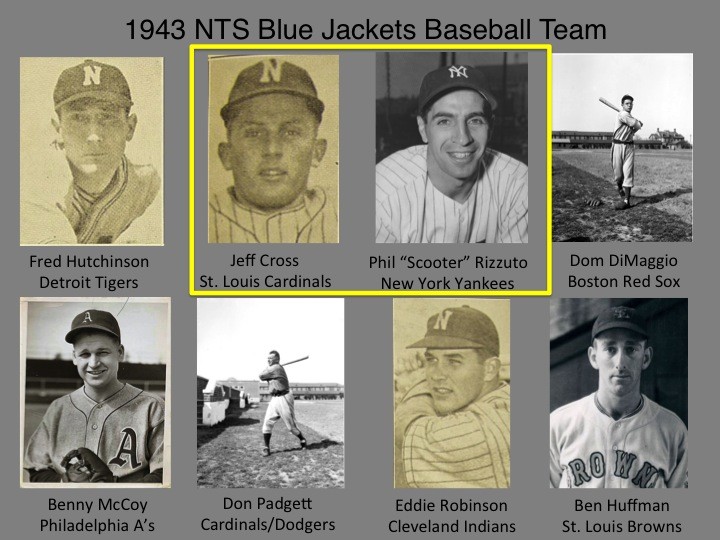 Captain McClure was right when he once said that his 1943 squad was “loaded.” The Tuscaloosa News ran a story before the season began about the state of the team. Coach Gary Bodie was more than optimistic about their prospects, declaring his team “had so much pitching” that they “don’t know what they are going to do with it all.” Only the Great Lakes baseball club, often called the “largest athletic plant” of any service team, compared to the NTS Nine. The Great Lakes Blue Jackets had star Tiger catcher Mickey Cochrane at the helm as their coach. Cochrane received a commission as a Lieutenant to run the Great Lakes squad. Great Lakes and Norfolk had high hopes to play each other during the 1943 season. 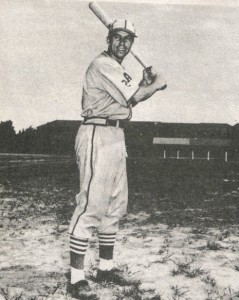 Things started to take shape in Norfolk in early 1943. Two Navy teams in the area began to emerge: the NTS Blue Jackets at Naval Training Norfolk and the Norfolk Naval Air Station (NAS) club. Both teams became one of the best rival stories in the history of professional baseball.

Like Great Lakes, nearly all of the players of the NTS and NAS teams had professional experience. Looking at the roster of the 1943 NTS Nine, two players who recently enlisted in the Navy played in the 1942 World Series (Jeff Cross and Phil “Scooter” Rizzuto). Fairness became an issue. The NTS team looked so good that their future Navy opponents began to lament their lineup. When it looked like Dodger all-star Pee Wee Reese would join the NTS Nine in 1943, NAS CO Captain James Marshall Shoemaker took it up with his counterpart to object. After much debate, Captain McClure begrudgingly sent Reese to play for the NAS ball club. One author stated that McClure did this gesture out of respect: Captain Shoemaker was the commanding officer at Pearl Harbor when they fell under attack in December 1941.

Opening day came for the NTS Nine Blue Jackets in early April. Due to the need for exposure and the necessity for practice, the Blue Jackets’ first opponent was the Washington Senators. The Senators were the closest professional team, and McClure wanted to showcase the talent on his club in grand fashion. The Senators opened their Grapefruit preseason by traveling down to Norfolk to square off against the Blue Jackets in a two game series.

McClure field was not large by major league standards. For a naval base, it far exceeded most with a capacity for 3,500 spectators. Over 5,000 sailors came to the sold out opening day games on 2 April. The NTS Nine won the first game and lost the second to the Senators. Either way, the NTS Nine were off to a good start for their 1943 season. The Navy invited a Virginian-Pilot photographer to take pictures of the game and the crowd. It was one of the few times a civilian photographer was allowed to capture the team playing during the war. The majority of those images are now digitized on the Norfolk Public Library’s website. 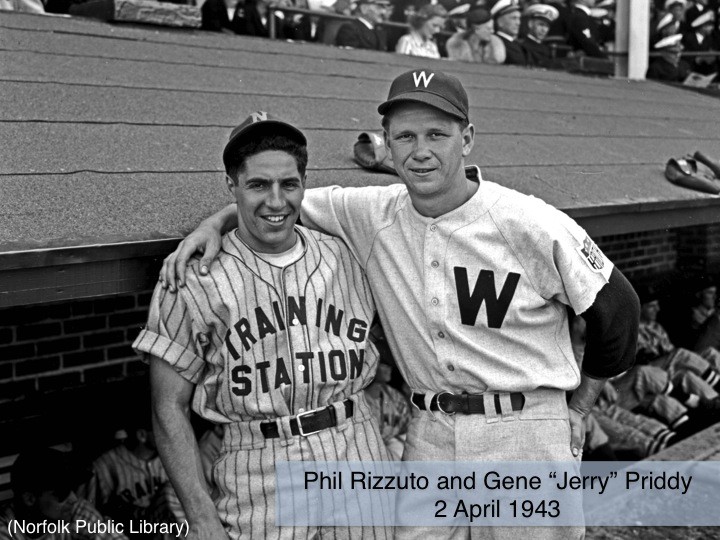 Captain McClure seized the opportunity to capitalize on his newfound talent in Tidewater. He often wrote in the station’s publication, The Seabag, urging his sailors to come to the games. In truth, his passion and devotion to the team closely resembled of current Dallas Maverick’s owner Mark Cuban. Although he had very little knowledge of the game himself, he loved every minute of it. He also knew the value of baseball to raise the morale of his sailors in a way no USO show could dream of. There is a story that is often circulated about Captain McClure and the baseball team in 1943. According to some sources, Captain McClure was attending to base business and would be late for the opening of a baseball game. He told his subordinates that the team could start on time, but “not to score until he got there.”

[Next in PART III: The 1943 Season and the Beginning of a Rivalry]