Social media outlets outside the realm of naval history will occasionally publish content relevant to the history of the United States Navy. For better or worse, students and enthusiasts of the subject cannot help but crack a smile that information once held so close to the vest is now blasted to millions of people everyday. Cracked.com, the website and social media faction to the popular magazine of the same name, put out an article yesterday on the Internet extolling the heroic “trash talk” of some of histories greatest warriors. The article, titled “The 10 Greatest Uses of Trash Talk in the History of War,” makes no illusion that the half-history/half-humor list is about (warning – mild language):

“Yet history records some baddass trash talk that would put Schwarzenegger to shame, some spoken in dire circumstances. Of course, it takes a certain type of badass.”

By all accounts, the amount of historical research and knowledge presented is respectable. The article mentions everyone from King Leonidas to Joan of Arc. Included in the list historical situations were two of the most famous events in the history of the United States Navy: John Paul Jones’s fight with the Serapis and Oliver Hazard Perry’s exploits at the Battle of Lake Erie. 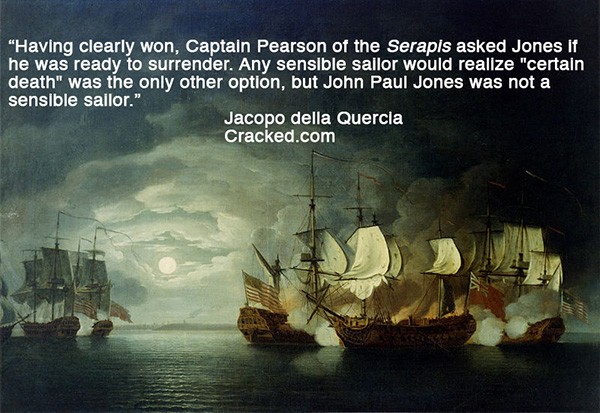 The list discusses Captain John Paul Jones’s extraordinary fight with the HMS Serapis during the Battle of Flamborough Head. Unfortunately, the sites are linked to Wikipedia and not a historical site. The brief text included in the article describes Jones’s decision to ram the Serapis in an all-out act of heroism and desperation. During this, he utters his now famous line; the kind of trash talk any true patriot loves to hear over and over again:

“I have not yet begun to fight!”

The outcome?  The Bonhomme Richard was lost (and still trying to be found today), but the intrepid leader commanded the Serapis to nearby Amsterdam on a victory cruise. It is the kind of situation where legends are made from, clearly evident by some of the humorous captions included with the images, which are borderline meme-worthy: 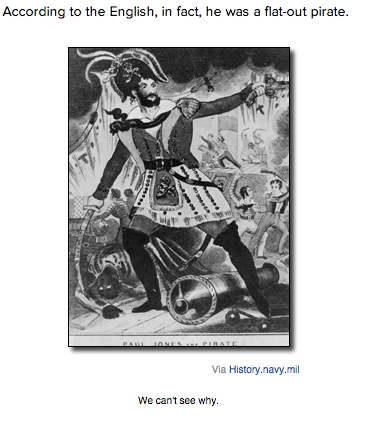 Hey – at least they attributed the Naval History and Heritage Command! Screenshot via Cracked.com

The next piece of “trash talk” included in the list was Oliver Hazard Perry’s famous “We have met the nemey and they are ours” quote from the Battle of Lake Erie. The author begins the situation by saying that Perry was “the type of man that Cracked lists were invented for, starting with his impossibly ballsy name.” There is no arguing there. Looking through the description, the author of the article had as much fun talking about the physical description of Perry than describing the story behind the line itself: 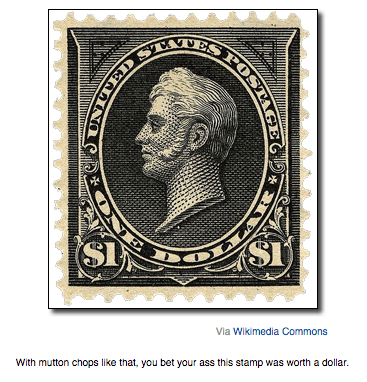 The author eventually discusses how Perry’s daring decisions led to a decisive victory against the British fleet at Lake Erie. He includes enough history in there to both fascinate and entertain and educate. Are there pieces missing to the story? Certainly. That does not mean that men like Perry should not get their due and proper, now two centuries later.

Anybody that says history cannot be fun and relevant should read these articles (likely with a grain of salt). For many fans of naval history – this is all old news. Countless books and scholarly articles discuss the daring heroics of two of the United States Navy’s most iconic sailors. Even so, others had a hard time placing a finger on these two men:

Unfortunately, John Paul Jones is often misunderstood for the bass player of Led Zeppelin. These misconceptions are not reserved for Cracked alone. According to Urban Dictionary, a web-based dictionary, the fourth definition of John Paul Jones lists the Father of the U.S. Navy as “some navy guy:” 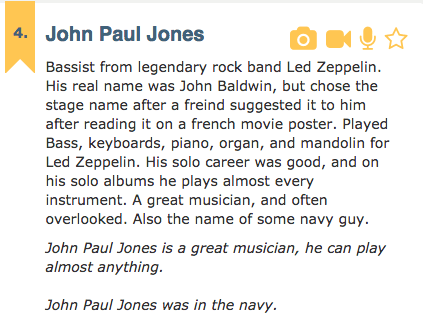 Of course, many of us know John Paul Jones as a daring sailor who helped secure our nation’s independence. Despite what social media says, he will always be that way. That’s not to say Led Zeppelin isn’t great either.