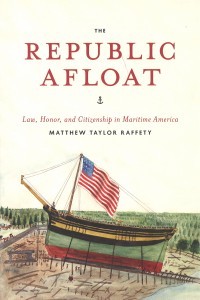 With the rise of the American merchant fleet to a position rivaling that of Great Britain, the lives of American seamen (from the end of the American evolution to the beginning of the Civil War) sparks great topical interest. Coming to the forefront of this phenomenon was the identity of Americans as individuals entitled to the rights of citizens of a nation.

From the Colonial Period to the Civil War, Americans went to sea in trade ships carrying goods across the globe. Whaling ships penetrated the vast seas from the tropics to the Polar Regions. U.S. Navy ships, flying their new nation’s flag, explored and charted expeditions aiding the country’s seaborne commerce.  American seamen confronted issues ranging from serving on unsafe ships to personal abuses from those in command.

Personal honor was woven into disputes held by individual men, officers and seamen collectively, and society at large. Disputes were not just decided by the Judiciary, which required those concerned to be in court. They were also handled within the Consulates located in cities and countries outside U. S. boundaries (There would be 282 Consular Offices by 1860).  Although most Consuls lacked legal training and experience, they proffered sailors a place to air their grievances, secure shelter, obtain documentation of their American citizenship (undefined until the Fourteenth Amendment was added in 1868 to the U. S. Constitution), and generally receive a helping hand in foreign environs.

Matthew Taylor Raffety’s scholarly work will benefit those with an interest in the law and American history, especially those focused on the early maritime life of the American Republic.

Sam Craghead is a Marketing Outreach Specialist and Public Relations Manager at the Museum of the Confederacy.