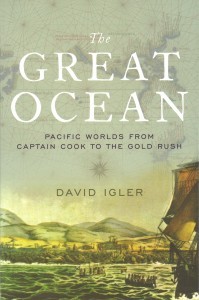 Professor David Igler recently won the North American Society for Oceanic History John Lyman Book award for the category of U.S. Maritime History, and rightly so. The Great Ocean is a tale of the interaction between different Pacific cultures from around 1770 to 1850. While the initial temptation of this period might be to look at it from an American viewpoint (from a colony on the verge of independence to a world economic power), the author goes for a grander scale. While the Trans-Atlantic Trade and Columbian Exchange are well known for the exchange of goods, services, and ideas, there was an equally important and lesser known interplay in the larger Pacific Ocean. Professor Igler has ably set out to redress this lack of attention.

“The Great Ocean” was coined by a Prussian-educated French aristocrat named Adelbert von Chamisso. The aristocrat sailed on the Russian vessel Rurik, whose mission was to discover a Pacific-based Northwest Passage from 1815-1818. In his Remarks and Opinions of the Naturalist of the Expedition, he called for the retirement of the terms “Pacific Ocean” and “South Sea.” Instead, von Chamisso argues that “The Great Ocean” is a far more accurate term due to the scale and complexity of the area. These complexities are covered in six chapters and a conclusion.  “Seas of Commerce” focuses on the changing maritime trade, especially the prime players from the later eighteenth to the mid-nineteenth centuries.

While there had been important maritime avenues beforehand, such as the Spanish silver fleets and Dutch East Indian Company, the later eighteenth century saw the British East India Company (EIC) ascendant. After the Napoleonic Wars, however, her former colony, the United States, began to push the EIC out of the China trade, assisted by Continental powers hoping to recover from those same wars. In desperation, British merchants turned to the forced importation of opium.

“Disease, Sex and Indigenous Depopulation” looks at the devastating effects that disease spread through sickness and sexual contact had on communities around the Pacific. Many of these diseases, such as Syphilis or Gonorrhea, affected multiple generations, or prevented them due to sterility. It became a horrific “gift that kept on giving.” “Hostages and Captives” deals with the reality that most first-contact situations (or successive interactions, for that matter) led to hostage-taking and permanent “gunboat diplomacy.” “The Great Hunt” chronicles the wholesale slaughter of Sea Otters, Seals and Gray Whales. The first two were nearly driven extinct for their valuable pelts. The latter was prized for the high quality “sperm oil” in the first few decades of the Industrial Revolution for the maintenance of machinery. The Petroleum Revolution that followed would have equally important economic effects.

“Naturalists and Natives in the Great Ocean” looks at some of the “Scientifics” that went on expeditions, both trade and exploration. The aforementioned Adelbert von Chamisso was one such “Scientific,” and probably the one who had the most long-term view of the changes being wrought upon the area by European and American mariners. “Assembling the Pacific” recounts the United States Exploring Expedition of 1838-1842. While initially associated with the flaws of the expedition’s commander, Lieutenant Charles Wilkes, who was court-martialed upon the fleet’s return to New York.

One of the “Scientifics” on board, James Dwight Dana, would leave a legacy far beyond the original scope of the expedition’s parameters. Dana was the first person to assemble all the pieces discussing how the Pacific region came about. Like Isaac Newton and Charles Darwin, he was able to use preexisting theories to create a more complete picture. In his “Origin of the Grand Outline Features of the Earth,” he was able to formulate theories on the creation and decline of volcanic ranges without the advantage of sonar. The latter was based on his cornerstone embrace of erosion over time, while he dubbed the former “a grand volcanic border” (now referred to as the “Ring of Fire”) that surrounded the Pacific.

Both concepts also alluded to an earth much older than hereto believed, especially when partnered with Darwin’s contemporary research. The conclusion, titled “When East Became West,” illustrates how the Pacific Worlds had changed since Cook’s voyage. The Gold and Silver Rushes and the Petroleum Revolution led to new maritime realities, as would the opening of Chinese and Japanese ports. Steam ships would make the Pacific (and by extension the world) a smaller place.

This is an excellent book overall. The major criticism that I have is that the only map is not very detailed. This is especially glaring when trying to track different voyages. All criticism aside, I recommend the book to anyone interested in Nautical History or Exploration. Just make sure that you have an atlas within arm’s reach.