NORFOLK (Jan. 24, 2014) An officer aboard the amphibious transport dock ship USS Arlington (LPD 24) bows his head during the invocation of the dedication and ribbon cutting ceremony for the ship’s 9/11 Tribute Room in honor of all those who died in the attacks on Sept. 11, 2001. One hundred and twenty-five military service members and civilians lost their lives in the terrorist attack on the Pentagon. (U.S. Navy photo by Chief Mass Communication Specialist Peter D. Lawlor/Released)

I was 17 years old in 2001. My worldview did not extend beyond the confines of my immediate friends and family. Although I was a Senior in high school, I still had a lot of growing up to do. A lot of that experience happened on the morning of September 11th. Like others around the country, I watched in horror as my narrow scope of the world shattered, opening my eyes to the harsh realities of an America at war.

I had lived in Hampton Roads my entire life. Naturally, everybody knew somebody who is in the military – friends, neighbors, or family. Every resident of Hampton Roads knows what jet noise sounds like. After years of conditioning, the sound becomes soothing. I remember seeing the hub of activity Norfolk was during Operation Desert Storm. This was different. It was even different than the response from the attack on USS Cole, home-ported in Norfolk. There was more of a frenzy. The following week, it was hard not to hear lunchtime conversation around you talking about enlisting and joining up. I didn’t think much of it back then. I think about it almost every day now. I can imagine the buzz of fervor was much the same around the United States in December 1941. Or in February 1898. Or April 1861. 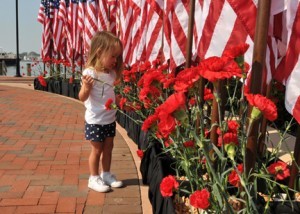 A girl places a flower beneath a row of flags during a 9/11 ceremony in Norfolk, Va. The City of Norfolk hosted an all-day healing and remembrance ceremony at Town Point Park to mark the 10th anniversary of the Sept. 11, 2001 attacks. (U.S. Navy photo by Mass Communication Specialist 3rd Class Stuart Phillips/Released)

Historically, it hasn’t been that long since the attacks. Watching the footage still evokes emotion. It seems like it was yesterday. Watching older films with the iconic NYC backdrop always make note of the Twin Towers in the distance.

Enemy attacks on the United States are still very well in the memory and minds of the American public. We are only a shade over 70 years since Pearl Harbor, and are currently commemorating the bicentennial anniversary of the British attack on our nation’s capitol, typified by this weekend’s “Star-Spangled” events in Baltimore.

I am 30 years old now. I STILL have a lot of growing up to do. The world has a lot of growing up to do. I can sleep safe knowing that our men and women of the United States Navy are keeping the watch, making sure the aging process for both goes as smooth as possible. Take a second today and thank your fellow service members who answered the call, and honor those who gave their fullest measure of devotion on the morning of September 11th and beyond.

Do you have a story about your experiences with 9/11? Share it here or on our Facebook page.