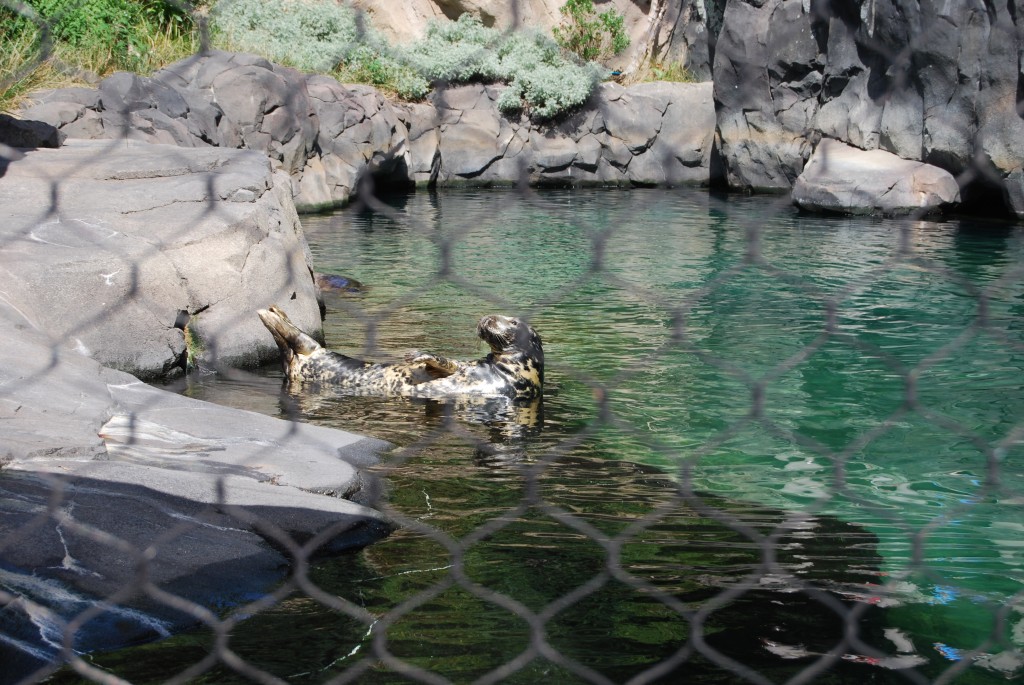 Selkie the Seal lounging in her retirement. (NHF Photo/Matthew Eng)

Not many veterans can say they are paid out their Navy pension in fish.

It was a perfect Sunday to go to the Smithsonian National Zoo. After a wet and rainy Saturday this weekend, I was relieved that I would not disappoint my group of out-of-town friends who, among other things in the district, wanted to see the zoo. Admittedly, the main focus of our trip was to wish Bao Bao the panda bear a happy first birthday. Little did I know that I would get to meet a real Navy seal. No, not the elite Special Forces extension of the Navy you may be thinking of. I mean the marine mammal.

The day was warm and pleasantly mild – the perfect day to visit. Towards the end our time there, we decided to cut a swath through the middle of the park to the parking lot. The fastest way possible from our position near the elephants was through the American Trail walkthrough. The beginning of the trail exhibit winds down “Rock Creek,” where guests explore everything from bald eagles to river otters and beavers. As that section gave way to the coastal region along the middle of the trail, I noticed a large rectangular tank surrounding by cliffs of rocks. Among a group of seals swimming in torpedo-like fashion was one in particular that caught my eye. This particular seal stood at the edge of the water, sunning on a rock as a bevvy of shudder-happy onlookers snapped away from the observation point above.

I asked a nearby docent a little about the seal. It looked all too comfortable to be in there. The docent smiled and commented, “That’s because she is a seasoned veteran of the zoo.” She proceeded to tell me that her name was Selkie, a 41-year old gray seal that has lived at the zoo since 1979. I was interested in her story, but was ready to move on. As I walked away, the docent added, “and she is a Navy veteran as well.” My ears perked. The gears started moving in my head. I was staring at a literal NAVY SEAL. It was one of those rare occurrences where metaphor became reality. I had to know more.

The informed docent began to tell me about Selkie’s amazing life and relationship with the Navy and the Smithsonian. I began to learn a little more about Selkie and her relationship with the United States Navy. The essential facts were there, but I still wanted more. I researched everything I could about Selkie immediately after I got home from the zoo. As it turns out, Selkie was “Government Issue” almost from the beginning of her life. Thanks in large part to an article written by Cindy Han in the NOV/DEC 2008 edition of the Smithsonian’s Zoogoer, I was able to fill in the details of this extraordinary seal. 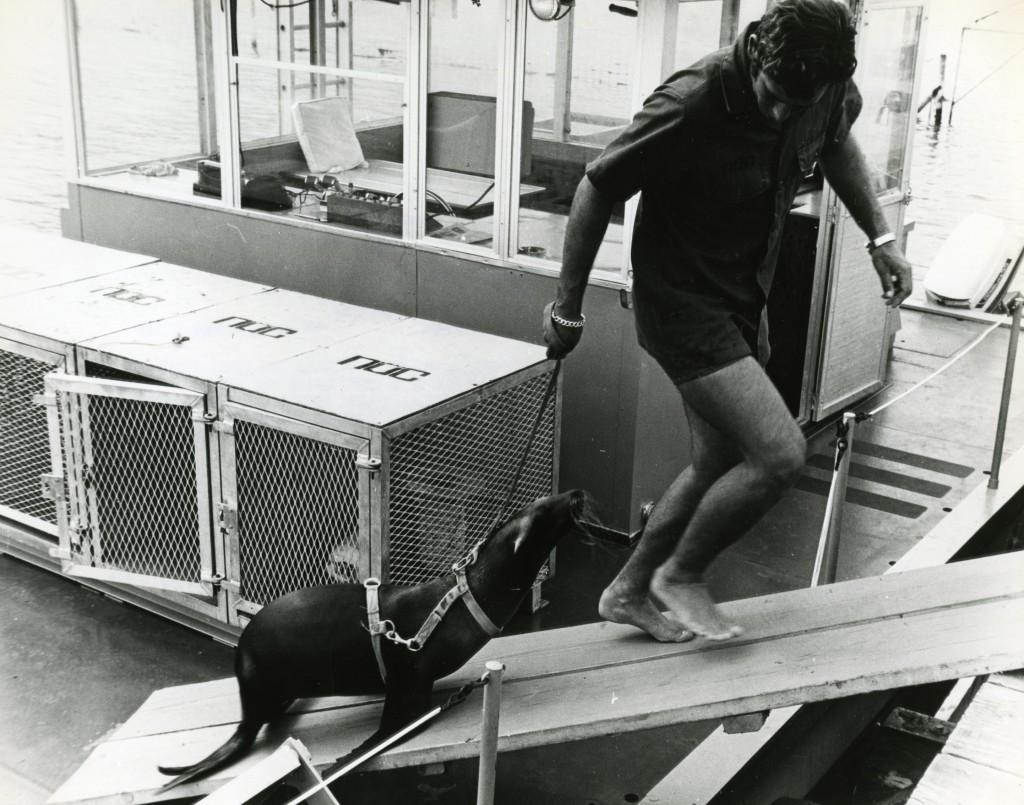 PACIFIC OCEAN (November 1970) Handler Jim Corey leads a harnessed sea lion up a ramp during the animal’s training. Animal behaviorists from the Naval Undersea Research and Development Center, Pasadena, are training the sea lions to encircle and lock a grabber device into a target in the sea. (US Navy Photograph)

Naval researchers near Iceland caught Selkie and her counterpart Gunnar more than forty years ago. At the time, both pups were just six months old. Selkie and Gunnar “enlisted” in the Marine Mammal Program (MMP). At the time, the MMP was a secretive Cold War initiative that used marine mammals to perform underwater work.

According to the US Navy Marine Mammal Program website, work with marine mammals began in the late 1950s. The Navy wanted to study how dolphins moved in water in order to possibly improve torpedo and submarine designs. At the beginning of the Marine Mammal Program, the Navy experimented with several types of marine mammals, including killer whales, pilot whales, white whales, Steller sea lions, fur seals, and grey seals. The Navy found that marine mammals are highly adaptive and reliable animals, capable of helping us build a better Navy.

The duties and responsibilities of the Navy’s aquatic enlistees changed many times over the years. One of the their initial duties was to locate personnel from downed aircraft. They also had applications in naval science. A study on the program included in a 2010 International Journal of Comparative Psychology article explains further:

“Early in the MMP there was interest in what might be learned from diving animals like dolphins, whales, and seals that might give clues to human diving diseases such as decompression sickness, aeroembolism, nitrogen narcosis and high pressure nervous syndrome.” 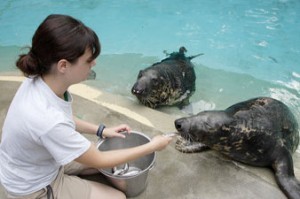 Selkie and Gunnar began to do train with the Navy for a variety of helpful tasks. According to Han, gray seals were specifically “taught how to retrieve items, insert and remove equipment, use a screwdriver, and even turn a large wheel valve.” According to one Navy trainer, Selkie’s behavior was particularly unique:

“(He) would take her by boat for an ocean training session. Sometimes she’d put her head in, enter the water, and practice her skills. Other times, she would pull her head back out of the water and stay put.” (Han, Zoogoer)

Their work with the Navy lasted a half-decade. The MMP discontinued the use of gray seals in 1979. Clearly evident by Selkie’s behavior discussed above, gray seals were not consistent with their work. Selkie and Gunnar retired from the Navy that same year and moved to their new life at the National Zoo in Washington, DC. According to the source, both seals continued to show the skills they acquired “working for Uncle Sam” years after they left the program. At the zoo, Selkie and Gunnar settled into their environment with ease, giving birth to a gray seal dynasty beginning in the early 1980s. They had two pups, Kara and Kjya, who spent several years at the Adventure Aquarium in Camden before returning with her family in Washington, DC. Unfortunately, Gunnar passed away two years ago, leaving behind his Navy family to keep the watch.

I am pleased to know more about Selkie and her amazing life. It makes sense that she needed to relax on that rock in a pool of water. She earned her retirement. I find comfort knowing that she can lounge around as her extended family swims happily around her.

I can’t wait to go back to the zoo. I know I’ll want to see the cute and clumsy panda bear and laugh at her hijinks with the rest of the visitors. No matter what, I’ll make sure to stop by the seal tank and thank a true Navy veteran before I leave. BZ, Selkie.

Today, the Navy’s Marine Mammal Program trains and cares for two species of marine mammal, the bottlenose dolphin and California sea lion (According to the MMP website, the Navy also has two white whales used for research projects). They are used to protect ports and Navy assets from swimmer attack and to locate potentially threatening sea mines. Marine research is another large part of the program. Since its creation over fifty years ago, the MMP has generated over a thousand articles of research from its various studies and exercises within the operational Navy.

A special thank you to the Smithsonian Website and Zoogoer for providing information on Selkie the gray seal. History and Information on the Marine Mammal Program can be found on their website.