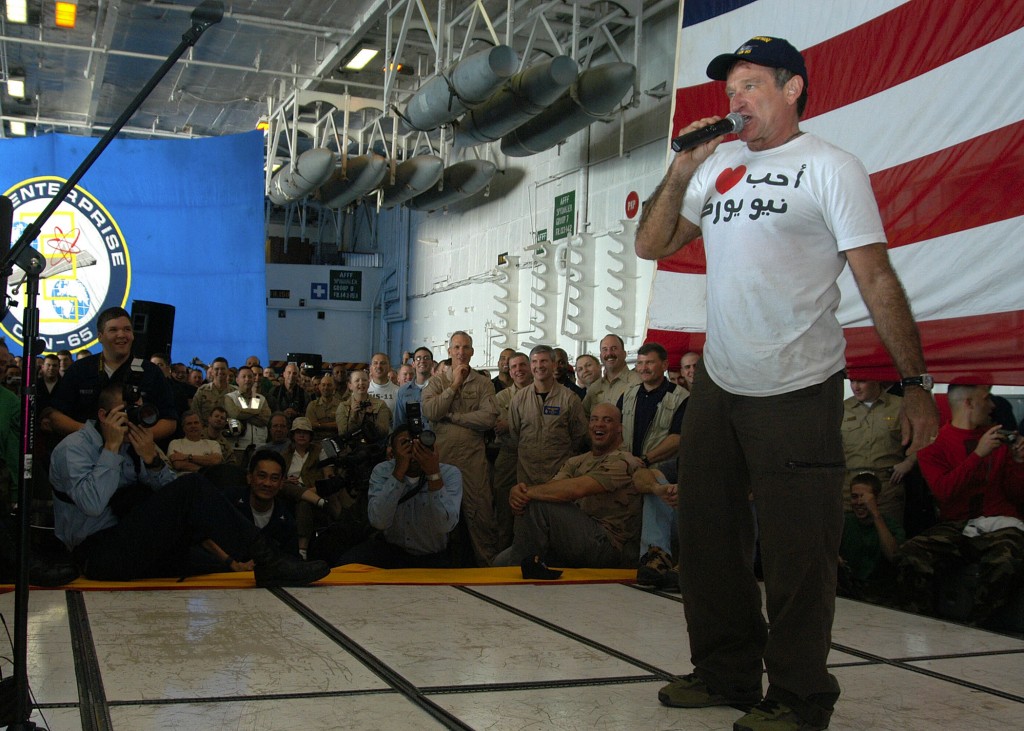 Many of us were shocked with the news of actor/comedian Robin Williams’s passing. Stories are now surfacing about his passions and pursuits outside of the Hollywood spotlight. This includes his profound love and support of the military.  He became a mainstay for USO tours overseas in recent years, including several visits to aircraft carriers operating in the Persian Gulf.

Robin Williams will have his place in naval history.

He was a man who cared deeply about the men and women protecting our country. Williams is known today as a profound and intelligent speaker and advocate who gave all of him, asking for little in return. Perhaps the best application of his talents came to his numerous tours with the United Service Organization. He followed in the great USO traditions of Bob Hope, Danny Kaye, and Dick Powell. In fact, a recent article in the wake of his death called Williams the “Bob Hope of our generation.” There is no arguing there.  In all, Williams appeared on six USO tours. In recent years, Robin Williams performed in the hangar bays of the USS Enterprise and USS Truman for consecutive holiday shows in 2003 and 2004 during Operations Iraqi Freedom and Enduring Freedom.

As many laughs as he brought to the men and women of the Navy, he also carried a profound knowledge and sympathy for the inherent risks involved in joining the military, especially during the war on terror. 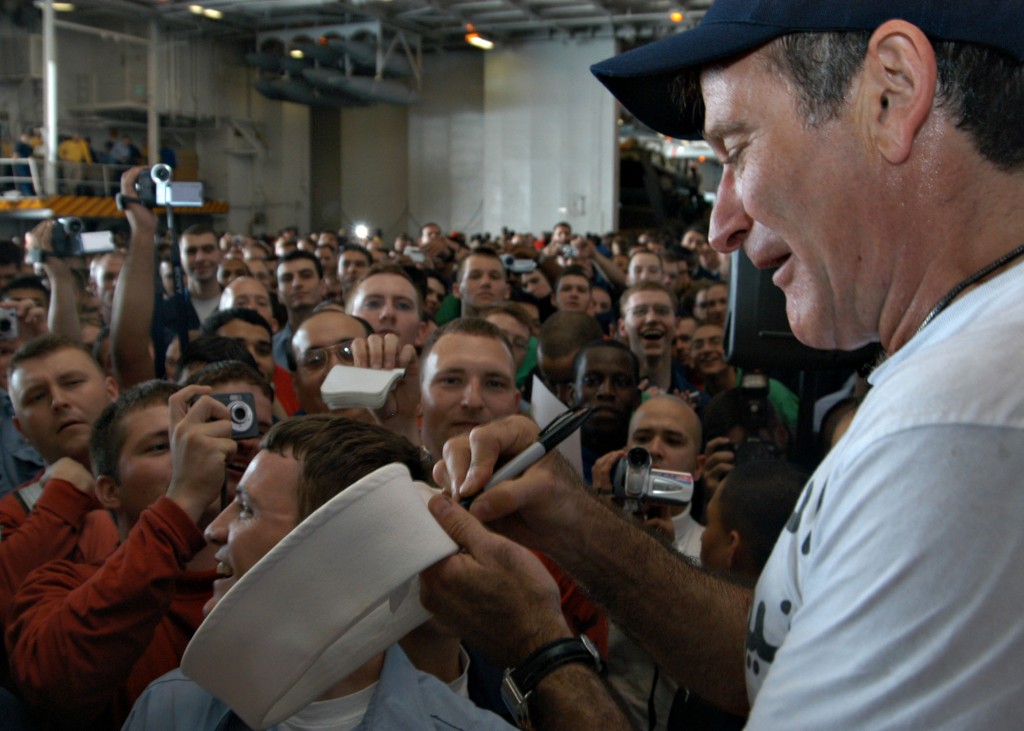 Much of this is due to the experiences of his father during World War II. During the war, the comedian’s father, Robert Fitzgerald Williams, served on an aircraft carrier operating in the Pacific Theater. His father’s ship was hit by a Kamikaze attack, destroying the bridge and injuring his father in the process. According to the actor, sailors near to his father perished from the hit. In a December 1991 interview with the Los Angeles Times, Williams talked about his father’s experiences of combat, using the title of a famous Wilfred Owen poem to illustrate his uncharacteristically somber point of view:

“He was lying there bleeding for eight hours. He tourniquetted himself. And he basically said, ‘Listen. There’s nothing more horrific than to lose the image that (dying for one’s country is) glorious—Dulce et decorum est…’ That whole horrific stuff, horrific lonely, horrifying. And that kind of wised me up.”

Love him or hate him, Williams was a giant in the entertainment industry. Anyone that saw his USO performances over the years knows he had enough charisma and passion to full the hangar bay of an aircraft carrier. He was just that kind of person.

——————————————————
I had the pleasure of meeting Robin Williams several years ago while working at the Hampton Roads Naval Museum. On this particular fall Saturday, I had the pleasure of being the weekend duty manager. Normally, weekend duty manager responsibilities were an undesired duty. Dates were drawn out like tickets in a lottery no staff member dared to win. In fact, much of that Saturday felt that way. The number of visitors entering the building during the fall pales in comparison to the summertime vacation rush.

Part of the duties and responsibilities of a weekend duty manager was to “walk the floor” of the museum each hour. Inspecting the facility helped ensure that all lights were working and artifacts were secure. During my 2:00pm stroll through the 5,000 square foot facility in Norfolk, I caught a glimpse of Mr. Williams and his wife in the World War II gallery of the museum. I could not believe my eyes. I ducked behind an artifact case and peeked around, just to be sure it really was him.

I had to walk around the museum, so I had to walk past him. I figured I would kill two birds with one stone. As I walked towards him, I could feel my legs giving way and my mouth filling with cotton. What would I say? I had no idea, but I was going to do it anyway.

He looked up from the aircraft carrier model and cracked a smile. He knew that I was going to say something, as if it happened all the time (Surely, it did). The only thing I could get out was, “Do you have any questions, Mr. Williams.” He said no. After a few awkward and tense seconds of staring and smiling, I moved closer to ask one last (important) question. He politely beat me to the punch and declined a picture with him. I was okay with that. Knowing what I know now about his history and connection to the Navy, he may have wanted a bit of solemn reflection.

I told him that I was a big fan of his work, smiled, and walked away. What I wanted to tell him was that I grew up watching his movies. I fell in love with his characters, many of which inspired me to start writing and reading more. Others, like his portrayal of Peter Pan in Hook, pushed me to dream big and pursue my goals. If he were here today, I would shake his hand for being a profound inspiration in my life. As odd as it sounds, my own thirst for knowledge of our nation’s Navy can be traced back to the classroom of John Keating in Dead Poets Society. Using the Latin phrase carpe diem, Mr. Keating implored his students to seize the day and fulfill your dreams. Despite his own demons, Robin Williams excelled as an actor, comedian, and supporter of the United States Military. Whether it is a teacher, a genie, Popeye, or a patriot, he will be greatly missed.