“This is Blackbeard on board Newport News with a shore bombardment force in Haiphong Harbor. We are engaged with several enemy surface units and need illumination to sort things out. Any aircraft in the area give me a call on guard. What we really need are high-powered flares. Blackbeard out.”

This year, the United States recognizes the beginning of its role in the conflict in Vietnam (1964-1973). From the Gulf of Tonkin incident to the Paris Peace Accords, American military forces played a critical role in the strategy and policy of the Cold War’s hottest conflict. As we ease into this 50th anniversary remembrance, themes of service and sacrifice of the participants involved will be emphasized. A ceremony held onboard the USS Midway Museum this Wednesday recognized the heroism of two naval aviators during Operation Lion’s Den, a critical nighttime surface operation late in the Vietnam War.

Forty-two years ago, then LT William W. Pickavance and LTJG Patrick D. Moneymaker, both aviators flying from USS Midway (CVA 41), answered a call from Vice Admiral Admiral James L. Holloway III, COMSEVENTHFLT, during a naval shore bombardment over Haiphong Harbor, Vietnam. The operation, code-named Lion’s Den, was a rare Joint Chiefs of Staff directed Navy night shore bombardment during the ongoing Task Force 77/7th Air Force air offensive known today as Linebacker. During the surface engagement, the four-ship formation, led by cruiser USS Newport News (CA 148), came under attack by enemy P-6 class fast attack craft in the dark. Deep in enemy territory and under fire from the shore, Admiral Holloway, embarked as an observer in Newport News, put out a radio call to any available attack aircraft to illuminate the immediate area to spot the oncoming torpedo boats. Pickavance (VA 93) and Moneymaker (VA 56) responded immediately to the radio call in their A-7B Corsair II aircraft, providing flares that illuminated the scene below for their low altitude bombing attacks that, along with the ships’ gunfire, sank the enemy torpedo boats. 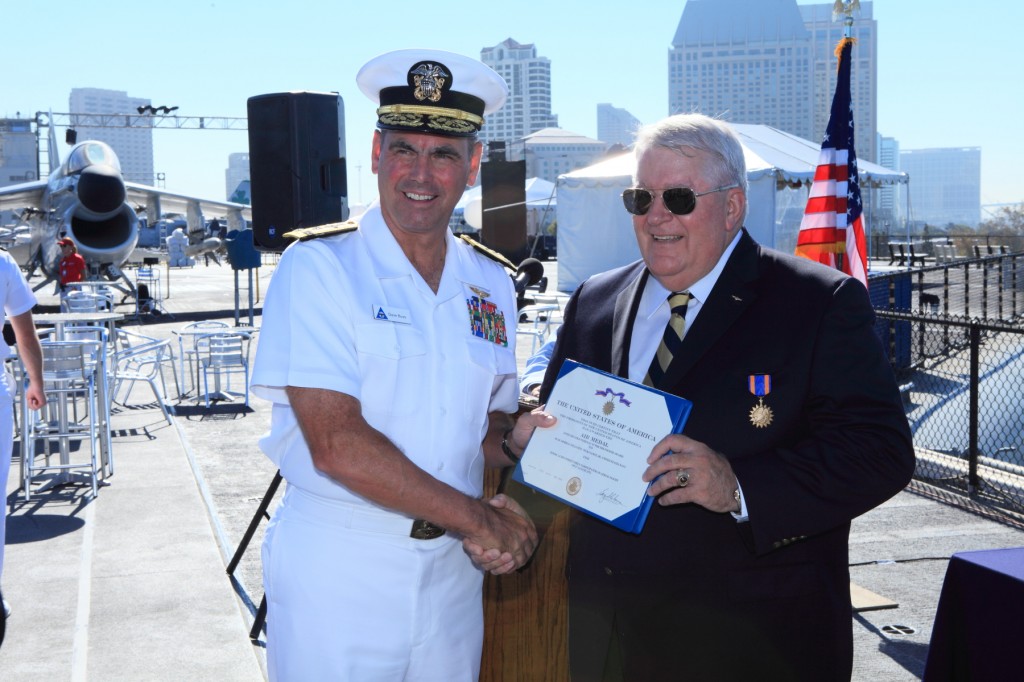 For their meritorious efforts during the engagement, Rear Admirals Pickavance and Moneymaker were awarded their long overdue Air Medals on 27 August 2014, the exact anniversary of their intrepid actions. Nearly fifty guests attended the special event on the same deck the two aviators flew from forty-two years ago. The medals were awarded through the coordinated efforts of the Naval Historical Foundation and former Senator Jim Webb (D-VA). Pickavance and Moneymaker received their Air Medals from Vice Admiral David H. Buss, Commander Naval Air Forces on behalf of SECNAV Ray Mabus. Both men gave heartfelt and emotional speeches in front of shipmates and family as they overlooked the beautiful waters of San Diego harbor. “I would have never imagined when I first joined the team at Midway forty-two years later that I would be here,” said Moneymaker.

Admiral Holloway provided his congratulatory comments by way of a recorded message to Pickavance and Moneymaker during the ceremony:

“As the Navy’s Seventh Fleet Commander embarked in cruiser Newport News to observe the night time raid into the North Vietnam port of Haiphong, I quickly realized that we had gotten ourselves into a difficult situation when, following our shore bombardment, North Vietnamese torpedo boats deployed and were closing swiftly to attack. Fortunately, the two officers standing before you today who were then young lieutenants flying from this very deck, responded to my call for air support with gusto and helped eliminate the threat.”

Admiral S.R. Foley, USN (Ret.), then commanding officer of Midway, also commented on the valor of these aviators during this timely event. Admiral Foley noted how proud he was to honor these men aboard his former ship, adding that he “would not have missed this opportunity for all the money in the world.” Also in attendance was retired Captain Thomas Althouse, the aide to Vice Admiral Holloway aboard USS Newport News during the attack. 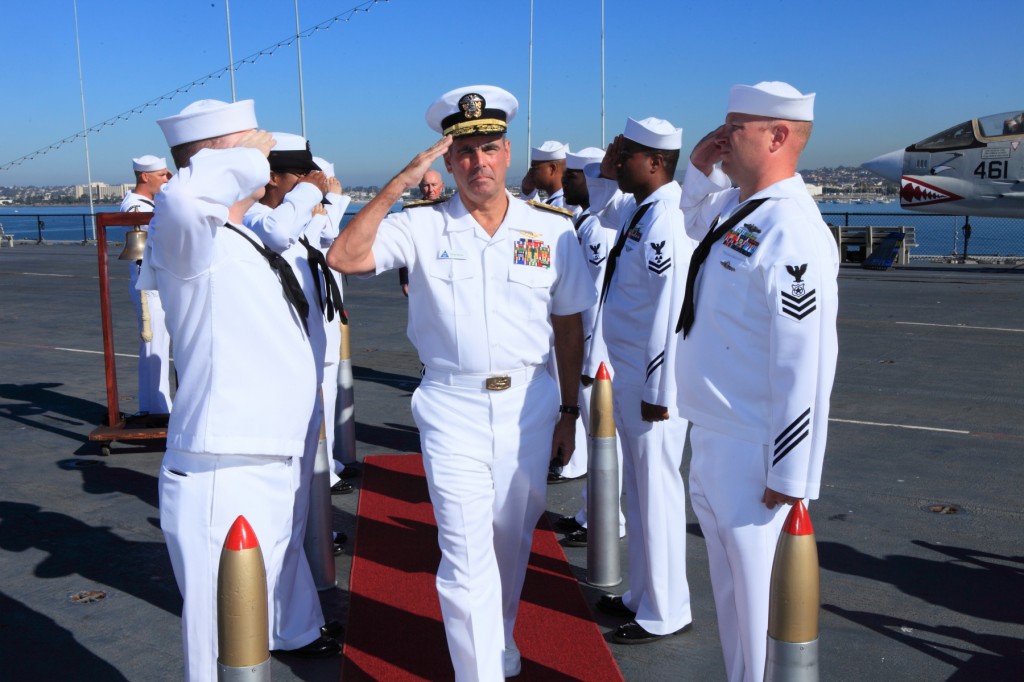 Our very own volunteer, Captain Edward Bronson, USN (Ret.), helped coordinate the event. Captain Bronson, a former Vietnam-era aviator, served on three aircraft carriers in combat during the conflict. Through preservation, education, and commemoration, the Naval Historical Foundation is delighted to honor the history and heritage of the men and women of the United States Navy. We thank our loyal members and donors whose continued generous support enables us to accomplish events like this.