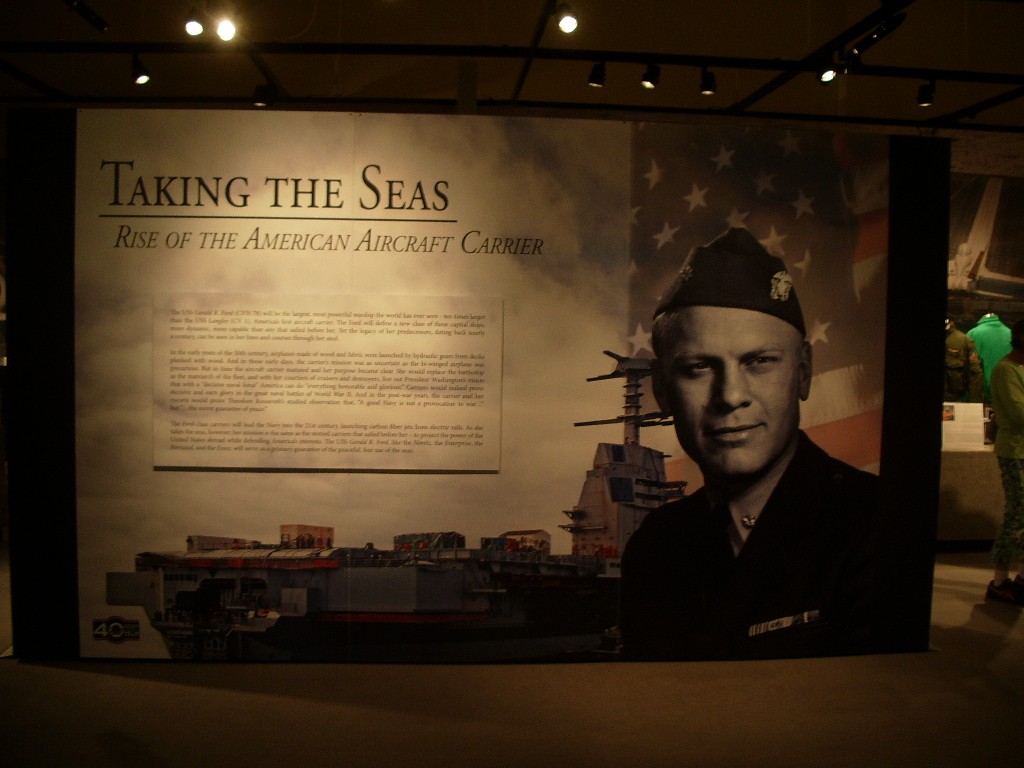 Naval Historical Foundation Executive Director Captain Todd Creekman, USN (Ret.) attended the opening of a new exhibit at the Gerald R. Ford Presidential Museum in Grand Rapids, Michigan last Monday. The exhibit, called “Taking the Seas: Rise of the American Aircraft Carrier,” discusses the history of aircraft carriers from their development during World War I to the present day innovations seen in USS Gerald R. Ford, a new class of carrier named after the former President.

The new exhibit explains how the American battleship, the most formidable naval vessel of the early twentieth century, was soon dwarfed by the aircraft carrier during World War II. The carrier forever replaced the battleship as the most powerful ship in the United States Navy fleet. The focal point of the exhibit chronicles Ford’s life and records his career transition from sailor to President and politician through the development of U.S. aircraft carrier power during he twentieth century. Ford rode the waves of innovation as a naval officer during World War II and then as a proponent of the nuclear carrier program at a time when many agitators against a nuclear Navy greatly outnumbered supporters.

Ford served as President of the United States when the nuclear-powered aircraft carrier USS Nimitz (CVN 68) commissioned in 1975. He was one of the few to possess the foresight to understand the cost-benefit relationship of the program. “It about doubled the cost of construction,” Ford Museum curator Don Holloway mentioned, “but it saved money in the long run.” Gerald R. Ford-class aircraft carriers will replace the Nimitz-class once in service.

The opening to the day’s events began with a wreath laying ceremony at the gravesite of President Ford. July 14th marked the 101st birthday of the 38th President. The Ford family laid several commemorative wreaths, and as tradition dictates, President Barack Obama sent the primary wreath in honor of the former President’s birthday.

Susan Ford Bales, daughter of the late President, joined several other dignitaries to cut the ribbon and open the exhibit. Those in attendance had the first chance to see several artifacts never before shown in public, including a Japanese hand-drawn map depicting the Pearl Harbor attack on December 7, 1941. “Taking the Seas” helps to tell the story of Ford and his World War II Pacific Theater experience as a gunnery and navigational officer on the light aircraft carrier USS Monterey (CVL 26). A large interactive tabletop display helps visitors understand what a multi-carrier formation looked like during the war, a key component to understand the story of World War II and the development of aircraft carriers. 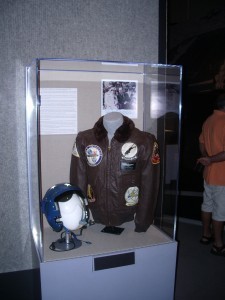 Admiral Holloway’s Jacket, Helmet, and Picture at the Exhibit

Other notable artifacts inside the exhibit include uniforms of Admiral Ernest J. King and Admiral William “Bull” Halsey, as well as a leather jacket and helmet of Admiral James L. Holloway, III, USN (Ret.), NHF Chairman Emeritus who was instrumental in the success of the nuclear-powered aircraft carrier. Included with Admiral Holloway’s items is a signed picture of Ford and Holloway at the 1975 commissioning of Nimitz. At the time, Admiral Holloway served as President Ford’s Chief of Naval Operations. Many of the uniforms and artifacts are on loan from the Naval History and Heritage Command.

President Ford’s role in the development of aircraft carriers serves as a bookend to his distinguished professional life. He had the distinct honor late in life to know the newest class of carriers in the United States Navy would be his namesake. He died in 2006. His daughter currently serves as the ship’s sponsor of Gerald R. Ford, which was christened last year.

The motto of the Gerald R. Ford is “Integrity at the Helm.” Those words form a strong bond between Ford’s military experiences and his political career, both of which required the keen insight and high ethical standards he exhibited throughout his life.

Special thanks to the Gerald R. Ford Presidential Museum and Captain Creekman for the photographs of last Monday’s event.