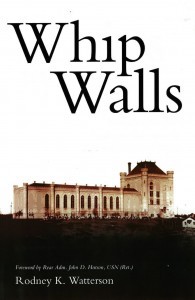 Casual readers of maritime history might be reluctant to pick up a book entitled Whips to Walls that features a photo of a grim castle-like prison on its cover. If so, they would be missing out. Captain Rodney Watterson has written an engaging scholarly study concerning an important but neglected part of American naval history. The book examines the men who were early naval recruits as well as what measures were used to establish and maintain shipboard discipline and its evolution in the face of moral and political pressures. It is also the story of a few unlikely men who introduced prison reform, particularly at the naval prison at Portsmouth, New Hampshire.

The first chapters examine the type of enlisted men the navy recruited to crew its wooden ships. Although largely capable, most were socially unsophisticated. Some had great difficulty performing dangerous duties upon a rolling sea. Others had issues with taking orders within a stratified, rigid military system of men who ranked over them and could also be belligerent. On shipboard, the Captain was the judge and jury who administered laws similar to those on shore, prosecuting uncivil conduct, drunkenness, theft, assault, battery, and even murder. He additionally oversaw other laws relating to military duties such as disobeying orders, disrespect to superiors, sleeping while on duty, being militarily unkempt, cowardice, desertion, etc. Punishment had to be swift yet not be too disruptive of the ship’s operation. The traditional or time-honored solution was to flog those who violated these laws with a prescribed number of lashes related to the type and severity of the offense. Punishment was carried out before the assembled ship’s company as an example to those who might commit similar acts. This had two advantages: those receiving the lash could show their courage by taking the punishment in a manly fashion and were able to recover in a relatively short time and remain available to perform his shipboard duties.

The first suggested change to be heavily debated was the abolishment of flogging in the navy. The author describes the divided politics concerning the implementation of this law in some detail. Many naval commanders favored flogging as a swift form of punishment and a time-tested disciplinary measure that kept a ship’s company intact and duty ready. Others saw this as an extension of slavery, an institution that was becoming more and more divisive in America in the 1840’s. Watterson explains the issues on both sides of the debate and largely focuses on Representative John P. Hale of New Hampshire, Thomas Lambert and Levi Woodbury as the heroes of this bill. Indeed they were, but he failed to mention Captain Isaac Hull who, in Linda Maloney’s comprehensive Hull biography, was renowned for his reluctance to use the lash. Also Commodores Uriah Philip Levy and Robert Field Stockton went without praise for their well-documented and compelling anti-flogging arguments before the United States Senate. Abolishment became law in1850, followed by the establishment of the naval prison system in 1888.

The navy decided it would be prudent to place the worst offenders in shore-based jail facilities such as state reformatories not far from naval bases. These prisons already held the some of the most hardened criminals in civilian society who might morally contaminate the navy prisoners. In order to solve this issue and support a possible return to active military duty, the navy built brigs at specific naval bases so that the navy could administer its own particular brand of punishment under the watchful eyes of marine and naval personnel. In doing so it also raised issues that needed review, restructuring, and reform , such as crime deserved what punishment within the navy. This led to building onshore prison facilities to house the offenders in secure barracks on naval bases. One prototype was the intimidating double turreted castle-like prison at Portsmouth, New Hampshire that dominated the harbor site, the focus of the major portion of the book.

The next segment of the book introduced the most interesting character and his supporting political characters that made this an especially worthwhile read. A former head of New York’s Sing Sing prison, Thomas Mott Osborne was appointed commander of the Portsmouth Naval Prison with the rank of lieutenant commander. He was a close friend of both Secretary of the Navy Joseph Daniels and Assistant Secretary of the Navy Frank Delano Roosevelt (FDR). The navy yard commander for much of Osborne’s term as prison commander was Rear Admiral Clifford J. Boush. Neither Osborne nor Daniels had much patience or apparent respect for chain of command, military protocol or customs. Osborne wanted to make drastic changes in the ways prisoners were treated. The lieutenant commander constantly went over his immediate higher-ranking officers, and certainly the admiral’s head, without regard to naval procedure. He wrote complaints and corrective suggestions directly to Daniels and FDR in Washington and seemed to visit them often. Daniels and FDR, in turn, generally agreed with Osborne’s reform measures and found substance in his complaints. In frustration, those in the chain of command also put their views in writing as a multi-year pecking-order kerfuffle ensued. This is an intriguing story, but the result is summarized by a 1913 quote from Daniels, “The policy of the navy is to make, not break, prisoners. . . . Old time methods of punishment have passed away, never to return.” (p. 104) Osborne sided with his prisoners in most controversies. Osborne even took nominal command of the prison ship USS Southery docked at Portsmouth as an overflow facility by arranging to have the Commanding Officer of Southery appointed as the assistant to the Commanding Officer of the Prison. Further, Osborne placed himself in command of the daily assignment of marine guards at his prison facility, over the objection of the detachment’s commander, Major Lauren S. Willis.

Osborne’s accomplishments were many, but one in particular had an important impact on the navy: a significant number of incarcerated men under his regime were able to return to active duty as useful shipmates and became acceptable members of a greater civilian society. The book has graphs and charts concerning the navy and its prisoners, many of which are hard to follow and are confusing. Arguably the most impressive graph shows the increase in the percentage of Portsmouth prisoners restored to duty versus those received at the facility under his stewardship.

In time Osborne and Daniels moved on, as obviously did Roosevelt. Many of Osborne’s prison reform measures were modified or rescinded in time, but they had a lasting impact on the way all military prisoners were treated. The Portsmouth facility was closed in 1973. Serious military offenders are now largely confined at Fort Leavenworth, where they are treated in a more humane environment and with more compassion. In conclusion, Whips to Wallsis at times an uncomfortable read, especially in its description of the cruelty that was inflicted upon the American sailors of the 19th and 20th centuries. Yet the book is rewarding in its description of the reforms that evolved and, in particular, the people who produced these reforms.

Dr. Norton is a professor emeritus of the University of Connecticut Health Center in Farmington. He was the recipient of the 2002 Gerald E. Morris Prize for maritime historiography.