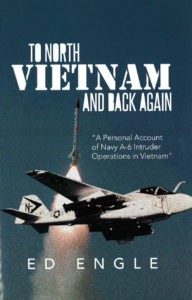 Edward C. Engle’s memoir offers a personal account of naval bombing operations and its dangers. Engle is a retired naval flight officer with engineering degrees from both Johns Hopkins University and the Naval Postgraduate School. After completing his education, Engle went to work for Pratt & Whitney Aircraft Corporation.

The first chapter discusses Engle’s childhood, family and education. Engle then describes joining the Navy and becoming a bombardier/navigator on the A-6 Intruder, serving with VA-128 and VA-165.  The bulk of the book takes the reader into the cockpit of the A-6 and the many missions it conducted during the Vietnam War.

“I loved the aircraft.  It was the best job I ever had!  But I didn’t like the bad reputation the plane was getting,” stated the author. “This book is a chance to correct the wrongs after 25 years. My purpose is to illustrate what the A-6 is truly capable of.” The A-6 Intruder was developed as the Navy’s first all-weather strike aircraft.  It was an excellent plane when you used the right data to carefully plan strikes on bombing missions.  The Navy was handicapped by lack of an accurate data base.  Engle said that the biggest problem in mission planning was the lack of “appropriate mapping on the charts used by the Navy.” According to Engle, the Navy “used charts which were printed from the French surveys of the 1930s.  The Air Force recognized the problem.   Even the Defense Mapping Agency said the charts couldn’t be used for target planning.  Also, the vibrations on ships caused problems during the planning.”

Engle did not keep a flight log. As such, he had sheets of paper with bomb loads.  “I didn’t realize until years later that Dan Graham, one of the pilots I flew with, had audio tapes.  This helped me get the sequences right, as well as the book by Jeff Ethell, One Day in a Long War.” Engle was able to get background information from the Intruder Association, but he also credits Dan Graham and his small tape recorder connected to the aircraft’s communications. “Without his help, this book would lack much of the detail it currently has,” said Engle.

Although Engle writes forty years after his experiences in Vietnam, he provides a detailed account of the missions he flew from the right seat.  On each flight to North Vietnam, Engle explains the systems, the tactics, and ordnances used over Laos, South Vietnam, North Vietnam and Cambodia.   Using an engineer’s analysis, Engle describes the difficulties preparing the A-6 for a strike.   Especially interesting is his discussion of the degeneration of DIANE, or the Digital Integrated Attack and Navigation Equipment.  Engle describes DIANE’s deficiencies and offers personal opinions of what happened. He also explains the systems, tactics, and ordnance used.

Later in the book, Engle describes his further assignments for the Navy once he changed careers to an aeronautical engineering duty officer.  In that position, he participated in the Cold War and European Theater operations as part of the National Space Program.  Engle concluded his Navy career developing the requirements for the Navy’s Force Network Concept.  Engle was responsible for introducing alternative methods for targeting .He later introduced commercial wideband satellite communications to Navy ships so they could conduct more precise targeting and photogrammetric planning.

Historians will gain insight into the complexity of the Navy’s air war in Vietnam.  Engle’s background as an engineer adds a technical depth to the analysis of wartime operations that puts the reader in the cockpit with aviators as they fly dangerous missions. The book lacks a glossary of the numerous abbreviations found throughout the book, only some of which are explained in the text. There is no index.

Jan Churchill is a pilot and writer who focuses on military aviation who reviewed To North Vietnam and Back Again after a discussion on 5 May 5, 2014 with author Ed Engle.