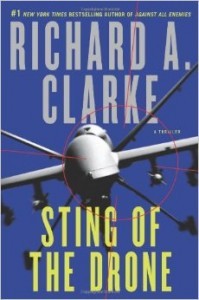 Unmanned vehicles represent the most recent revolution in military technology, especially those capable of launching weapons. Like any paradigm shift, their entry onto the battlefield has been followed by controversy as to the appropriate means to employ them both legally and morally.

New York Times Bestselling Author and former White House official Richard A. Clarke tackles these issues in his most recent novel, Sting of the Drone. Clarke builds an interesting story that introduces the current and future capabilities of unmanned aerial vehicles, commonly called “UAVs” or “Drones,” using the plot to incite debate on their use.

Clarke includes a note at the end of Sting of the Drone where he reports being instrumental in developing and employing drones beginning with the Clinton Administration. He recognizes their value as well as their pitfalls. He provokes much needed discussion throughout the novel. The American protagonists are Central Intelligence Agency (CIA) and Department of Defense (DoD) decision makers and operators. Their foes are the terrorists they target. While individual characters are not very compelling, perhaps they are not meant to be. Clarke’s narrative seems to be more about the developing scenarios and the decisions that must be made within them rather than relaying a central character’s journey. Thus, the drone becomes the main character. For example, the UAV teams wrestle not only with collateral damage – which is a factor in any kinetic conflict – but with using drones in our allies’ territory without their permission, suggesting other elements conducted the attack to hide U.S. involvement, and targeting American citizens without due process.

Sting of the Drone makes it immediately clear it is a new form of warfare wherein the vehicle – flying over Afghanistan, Iraq, Yemen, or.Austria – is directed from DoD or CIA locations in the greater Washington DC area and piloted by a crew in Las Vegas. As terrorists emerge on their displays a world away, night owls in DC and Vegas must make split second kill decisions. The right call cleanly ends a deadly enemy. Other times collateral damage weighs heavily on the decision makers and crews since their distance does not suppress their humanity. Though unmanned, there is a ‘human in the loop.’ This is actually exacerbated by their video game-like existence. After a mission, UAV crews go home to their families, lounging by the pool, preparing breakfast, or playing little league baseball as if there is no war at all. Clarke highlights this so that the reader can discern the disconnect some of these UAV crews must endure. Dealing with this dichotomy is difficult for individuals to process, leading to a high rate of drunk driving, divorce, and even post-traumatic stress.

All of these points emerge through an entertaining story wherein a terrorist group decides to strike back at the drones with surface to air missiles and asymmetric attacks against DoD and CIA personnel in the United States. When the drone pilots launch missiles, the terrorists respond in kind by adapting hobby remote controlled aircraft into flying bombs. The plot is well constructed, and the character dialogue is just interesting enough to create a nice balance that educates the reader on UAV employment while serving up the aforementioned debate at the same time.

Sting of the Drone is very timely, as Americans can expect more unmanned vehicles in our nation’s arsenal. As such, there will likely to be more discussion on the proper employment of these weapons of war as the technology continues to evolve. Sting of the Drone is a good place for anyone to start to delve into these topics.

Stephen Phillips is the author of Proximity: A Novel of the Navy’s Elite Bomb Squad and The Recipient’s Son – a story about the U.S. Naval Academy in the early 90’s.

Listen to a brief audio sample, courtesy of MacMillan Audio: