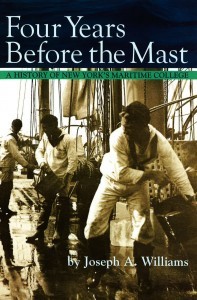 The State University of New York Maritime College is the oldest maritime college in the United States.  A history of this college is long overdue, and Joseph A. Williams has now provided an excellent one.  Williams is a librarian and archivist at the College and has made good use of the College’s extensive archives.

The College was founded in 1874 as the New York Nautical School.  It was run by the New York City Board of Education with the cooperation of the US Navy.  The purpose of the school was to provide formal training for American boys seeking careers in the Merchant Marine, thus providing a trained corps of maritime officers who could be quickly attached to the US Navy in time of war.  Training was held aboard a series of schoolships, the oldest and most famous being the St. Mary’s.

In 1913, the state of New York took over the College and changed the name to New York State Nautical School.  In 1929, the name was again changed to New York State Merchant Marine Academy, and in 1941 to the New York State Maritime Academy.  In 1949, the college became part of the State University of New York (SUNY) system and became the SUNY Maritime College. In 1934, after a bureaucratic struggle that took several years, the college acquired a shore establishment, a long-defunct Army base known as Fort Schuyler, located at Throgs Neck in the Bronx.  The college has been located there ever since.

The school has had numerous ups and downs throughout its 140-year history. Though its mission has always remained the same – to train officers for the merchant marine – there have been numerous obstacles along the way. The problems of the College when it was city-run, namely lack of a sufficient pool of applicants and lukewarm support from the Board of Education, were mostly solved by its takeover by the state in 1913. Other problems persisted.

When considering the academy’s history as a state, two issues present themselves as particularly affecting this institution.  One is the relationship between the state and federal governments running the college. Although the college is state-supported and the training is geared toward the civilian maritime professions, the federal government has an involvement as well. A federal Maritime Commission, which gained authority over the state maritime colleges, was created in 1936 (It was renamed the Maritime Administration [MARAD] in 1950). Graduates are given Navy Reserve commissions, and the Coast Guard licenses civilian mariners as deck officers.  The dual federal-state lines of authority have sometimes been blurred, which led to occasional conflict since the College administration must answer to both SUNY and MARAD.

The other issue that has affected the school throughout its history has been the dual nature of its civilian and military education.  Tension and occasional outright conflict surround the question as to which aspect would prevail. The student body has been organized along military lines ever since the school’s founding.  Students wore uniforms, were known as cadets, and were subject to military discipline.  However, the vast majority of students were training for civilian professions.  Inevitably, there was tension.  This reached critical proportions in the late 1960s and 1970s when many cadets (though certainly not all) rebelled against the strict discipline and military lifestyle.  The administration, wanting to quell vandalism, food fights, and general disrespect while fearing low enrollment, gave in on certain issues such as hair length, facial hair, and the wearing of civilian clothes on campus.  As a means of increasing enrollment and tuition income the college admitted civilian students and graduate students.  They took classes at the college but were not part of the Regiment of Cadets.  These two dualisms of SUNY Maritime’s existence, federal versus state and civilian versus military, can never be completely resolved, but they can be managed.

This book is well-written and strikes a balance between a narrative that stresses administrative history and one that focuses on anecdotes of cadet life.  The author strives for objectivity, even though he is writing about his employer.  His text is based on solid research in the school’s archives and is thoroughly documented.  There are useful charts in the appendix, which the reviewer consulted frequently.  The only jarring note is Chapter 5, “The Way of the Schoolship,” which is a fictionalized account of early cadet life.  The dialogue is corny and its credibility is dubious.  It is out of place in a scholarly history.  Apart from that quibble, Williams is to be commended for his fine account of a college that has made a major contribution to the nation’s maritime history.