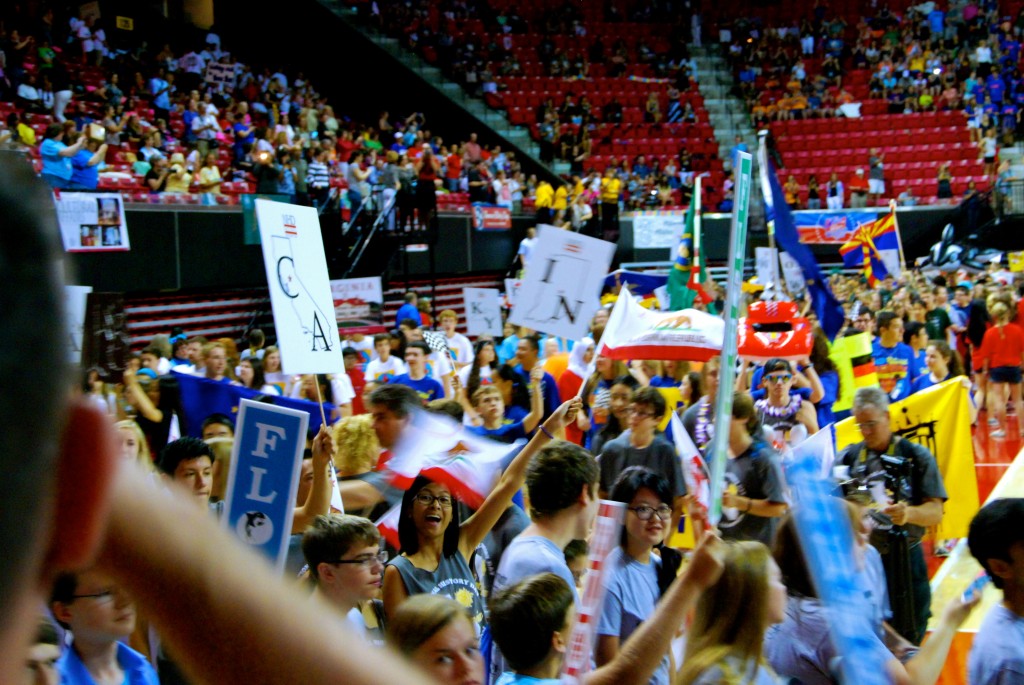 The parade of students at National History Day

Thousands of excited and energetic students from around the country packed into the University of Maryland’s Comcast Center last Thursday to participate in the awards ceremony for National History Day. The event is the culmination of a busy week for these young scholars. Students in middle and high school showcase their history projects, ranging from a variety of topics and presentations, to a group of expert judges. Awards are given according to type of presentation and subject matter, including naval history.

Naval Historical Foundation staff once again attended the event to help hand out the Captain Kenneth Coskey Naval History Prize. The prize is named for the late Captain Ken Coskey, a Vietnam War combat aviator and Prisoner of War, and former Executive Director of the Naval Historical Foundation. Rosemary Coskey, wife of Captain Coskey, and Captain Charles Chadbourn, USN (Ret.) presented the award and generous $1,000 cash prizes to the junior and senior devision winners in the documentary category. This is the first year that the awards were given to both high school and middle school representatives for the best naval history projects in their category. Captan Coskey was a long time supporter of National History Day up until his death last year. 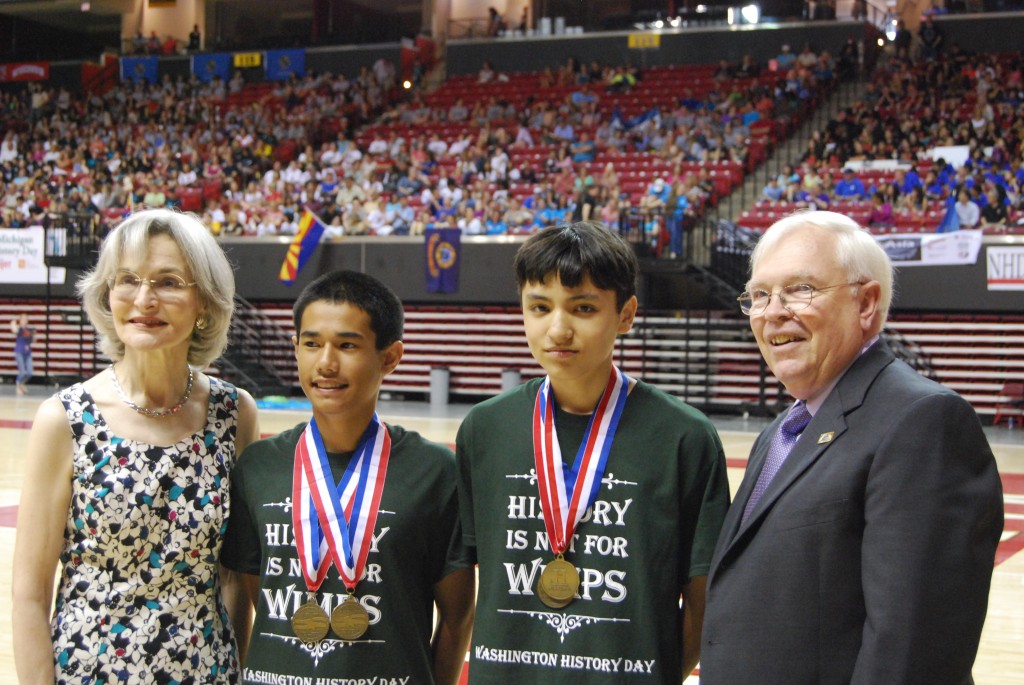 The Coskey Prize in the Junior Divison at National History Day went to Jethro Abayo and Logan Gibert of Pleasant Valley Middle School in Vancouver, WA, for their documentary, Vietnam Prisoners of War: Taking Responsibility When Deprived of All Rights.  In this compelling film, Jethro and Logan tell how POWs in Vietnam with no rights at all took responsibility for themselves and each other in one of a most difficult circumstance.  Their work is based on the true story of two aviators, Navy Commander Porter Halyburton and Air Force Colonel Fred Cherry. They detail how they saved each others’ lives under the cruel conditions imposed by their North Vietnamese captors at the Hanoi Hilton.  Cherry, an African American pilot from Southside Virginia, was badly injured and received no medical attention whatsoever. Halyburton, a NC native, was thrown into his cell and told to take care of the Air Force officer. 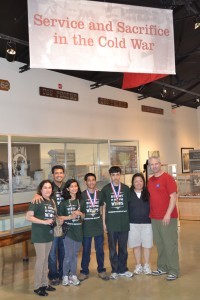 Ms. Irene Soohoo, their teacher, pointed out the serious and original historical research they conducted to prepare the documentary.  They obtained oral history interviews with both Halyburton and Cherry, as well as other POW survivors and their families.  They spent countless hours doing research in other primary sources to build their documentary.   Abayo and Gilbert also took home the the first place prize in the Junior Group Documentary category, beating out over 100 other entries from around the nation, as well as China, Korea, and Singapore.

After the awards ceremony, Jethro and Logan traveled with their families to the Naval Historical Foundation in the Washington Navy Yard to visit with Executive Director CAPT Todd Creekman. Captain Creekman presented the young scholars with NHF Commemorative Coins.  They went on to spend the afternoon touring the National Museum of the United States Navy and its Cold War Gallery. It was a fitting visit, as the found the Cold War Gallery’s Vietnam POW exhibit appealed to their historical interests. Jethro’s father whispered to Captain Chadbourn that the boys decided they wanted to attend the United States Naval Academy where they will aspire to become Naval Aviators!  Both plan to do NHD again next year once they get into high school. 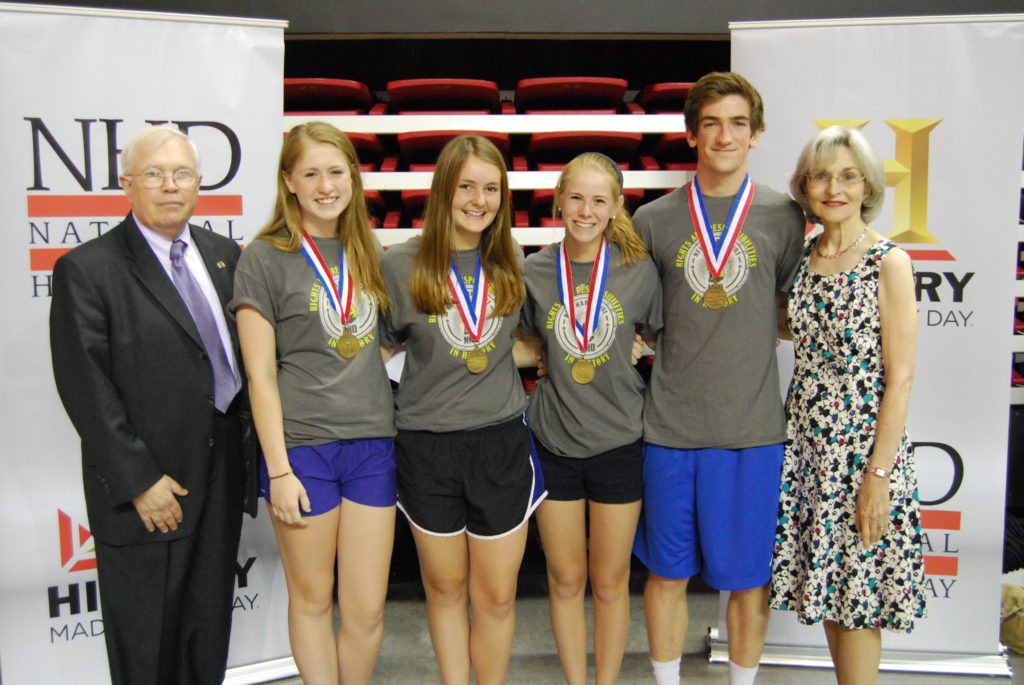 After ten months of research and preparation, students from Exeter High School (EHS) in Exeter, NH, competed at the annual National History Day competition. Their documentary, Golden 13: Civic Responsibility Before Self, by Katharine Journaey, Mark Cochran, Hannah McDonnell, Colby Gould and Emily Pierce, earned first place in the senior group documentary and a National Archives award at the New Hampshire state competition. EHS Advisor, Ms. Molly Stevenson, shared that the students “should be commended for their dedication to the historian’s craft. They have learned research, writing and presentation skills that will serve them throughout their lives.”  When asked what were highlights of the experience, each of the students cited the chance to study original manuscripts, interview experts and individuals directly connected to their topics, and design a project that would increase the public’s understanding of the subject.

A special thanks to Captain Chadbourn and Rosemary Coskey for attending the event and representing the proud traditions of naval history.